LONDON (AP) — British Prime Minister Theresa May faced wide-ranging criticism from skeptical lawmakers Thursday as she sought to portray a draft agreement on a post-Brexit relationship with the European Union as a “good deal for our country.”

Addressing the House of Commons after the publication of a 26-page draft political declaration with the EU on post-Brexit relations, May said the agreement will ensure a “smooth and orderly” British departure from the European Union. Britain officially leaves the 28-nation EU — the first country to ever do so — on March 29.

“The draft text that we have agreed with the (European) Commission is a good deal for our country and for our partners in the EU,” May said.

May is due to travel to Brussels on Saturday for further Brexit meetings, including with Commission President Jean-Claude Juncker, a day before a summit of the EU’s 27 other leaders at which both the political declaration on post-Brexit relations as well as the divorce agreement, which alone has legal status, are expected to be formally signed off.

The withdrawal agreement needs to be sealed soon to leave enough time for the European Parliament and the U.K. Parliament to endorse it.

May told lawmakers that the outlines for the future help protect jobs, end the jurisdiction of the European Court of Justice in the U.K., give British fishermen more control and avoid the return of a hard border between EU member Ireland and Northern Ireland, which is part of the United Kingdom. 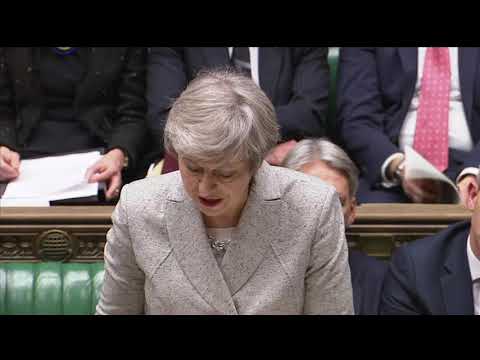 She also said the agreement paves the way for a free trade agreement with the bloc as well as allowing Britain to forge new trade deals around the world.

But her rosy predictions met with resistance on many fronts in Parliament, which is expected to vote on the Brexit plan next month.

At the moment, it looks precarious for the prime minister given the number of lawmakers who have expressed discontent with the proposals, notably the 585-page legal treaty that deals with the terms of Britain’s departure, including what the country owes the EU.

Jeremy Corbyn, leader of Britain’s main opposition Labour Party, poured scorn on the agreement on future relations, describing it a “26 pages of waffle” that represented a failure of the Conservative Party and May during two years of negotiations.

Corbyn said the agreement “represents the worst of all worlds” and that Britain will have “no say” over EU rules that will continue to apply in Britain.

“This is the blindfold Brexit we all feared,” he said. “A leap into the dark.”

May is likely to need some Labour lawmakers to back her plan if she has realistic hopes of winning approval, given that her Conservative Party does not enjoy a majority in the House of Commons.

May also faced criticism from hard-line Conservative Party Brexiteers, notably Boris Johnson and Jacob Rees-Mogg, and from others who pressed May to back a second referendum on the whole Brexit proposition.

If May fails to get a majority in Parliament, it’s unclear what would then happen. Some lawmakers argue that the country would end up crashing out of the EU on Brexit day with no deal, a scenario that could see tariffs slapped on exports and restrictions imposed on workers. Others hope Parliament could back a second referendum in the hope the public would call the whole thing off.

The political declaration was agreed upon at a technical level by negotiators and endorsed Thursday by the European Commission, the EU’s executive arm, which is overseeing Brexit negotiations.

“This declaration establishes the parameters of an ambitious, broad, deep and flexible partnership across trade and economic cooperation, law enforcement and criminal justice, foreign policy, security and defense and wider areas of cooperation,” according to the document.

It also talks about the close ties that have been cemented after 45 years of Britain’s membership of the EU and notes that the “parties envisage having a trading relationship on goods that is as close as possible, with a view to facilitating the ease of legitimate trade.”

In a speech in Berlin, German Chancellor Angela Merkel underlined that “Britain should remain a partner, remain a friend” but she underscored the difficulties that may arise in any attempt to keep services seamless.

“We have to say honestly that, in the services sector, we don’t have a great deal of experience with international free trade agreements,” she said.

“But we want to see that as a future relationship.”

One stumbling block relates to Gibraltar, the tiny territory at the tip of the Iberian Peninsula that was ceded to Britain in 1713 but is still claimed by Spain.

May said Thursday that she has spoken with Sanchez and that she is “confident” there will be a resolution on Sunday “that delivers for the whole U.K. family, including Gibraltar.”

Cook reported from Brussels. Danica Kirka in London and Geir Moulson in Berlin contributed to this report.