RIDGECREST, Calif. (AP) — The Latest on a strong earthquake in Southern California (all times local):

Officials told several hundred people at a community meeting in Ridgecrest to take precautions once running water returns to their homes after it was cut off by the two earthquakes that hit the town Thursday and Friday.

The officials asked residents at Sunday’s two-hour meeting to boil the water for at least several days once it comes back on.

Mayor Peggy Breeden said that two trucks with water are coming to Ridgecrest and the nearby small town of Trona.

Several people at the meeting in the Kerr McGee Community Center said that they will need counseling after dealing with the disruptions caused by the earthquakes, which included sleeping outside of their homes.

A seismologist says two large earthquakes that were centered in the Mojave Desert in California caused less damage and fewer injuries because their epicenters were away from densely populated areas.

Lucy Jones of the California Institute of Technology says the quakes neither increased nor decreased the chances of a large quake occurring on other faults, such as the gigantic San Andreas. 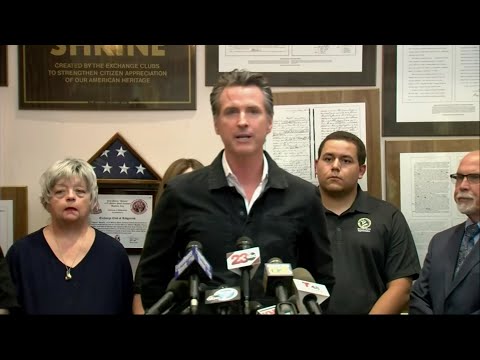 But she warned Sunday that on average, a quake of magnitude 6.0 or larger is likely to hit somewhere in Southern California every few years. Jones says the outcome will be worse if it happens on faults in metropolitan areas, such as Hollywood.

The region has faults that run through areas with thousands of buildings and millions of people.

Jones spoke at a Los Angeles Country earthquake preparedness forum after two quakes — a 6.4 and a 7.1 — struck Thursday and Friday, respectively.

Ridgecrest and neighboring Trona were hit hard by the quake, which came a day after a magnitude 6.4 quake in the same Mojave Desert area.

Ridgecrest Police Chief Jed McLaughlin said Sunday that an inspection shows roads are in good shape and the water system is working.

But many in Trona are without water, and crews are still patching up cracked roads in the town of under 2,000 people.

Gov. Gavin Newsom has estimated the damage at more than $100 million and says President Donald Trump has offered federal support.

The two major earthquakes that hit Southern California should alert people across the nation of the need to be prepared for the natural disasters, the state’s governor said as officials expressed relief that the damages weren’t worse.

Gov. Gavin Newsom said Saturday that governments must strengthen alert systems and building codes, and residents should make sure they know how to protect themselves during an earthquake.

Friday’s earthquake was the largest one Southern California in nearly 20 years. Officials voiced concerns about the possibility of major aftershocks in the days and months to come.

No fatalities or major injuries were reported after Friday night’s 7.1-magnitude earthquake, which jolted an area from Sacramento to Mexico and prompted the evacuation of the Navy’s largest single landholding, Naval Air Weapons Station China Lake in the Mojave Desert.