LAS CRUCES, N.M. (AP) — The leader of an armed group that has been detaining asylum-seeking families from Central America near the Mexican border said two years ago that he was training supporters to assassinate Hillary Clinton, Barack Obama and billionaire Democratic supporter George Soros, according to a criminal complaint filed Monday.

The FBI declined to comment on why it waited to bring charges against Larry Hopkins following a search in 2017 but his arrest follows widespread criticism after videos surfaced of their members carrying firearms and detaining groups of immigrants crossing the border.

Members of the group the United Constitutional Patriots say they want to draw attention to immigration violations and assist federal law enforcement in patrolling the border.

Hopkins, 69, made an initial appearance in federal court on Monday, two days after the FBI arrested him on charges of possession of firearms by a felon. He was arrested in Sunland Park, New Mexico, a suburb of El Paso, Texas, where his group has been stopping migrants, alerting the Border Patrol and ordering them to wait until agents arrive.

He will plead not guilty at a hearing next week in Albuquerque, said Kelly O’Connell, his attorney. He is being held without bond.

Hopkins allegedly invited an FBI agent into his home in 2017 and showed him at least nine weapons, including an AK-47 assault rifle and ammunition. According to the complaint, he first told the agent that the weapons belonged to his live-in girlfriend, but then referred to one of the weapons as his. 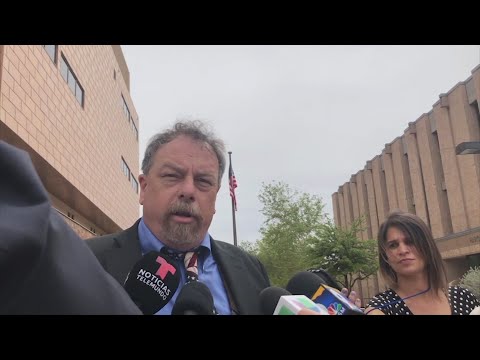 Hopkins told members of the Patriots in 2017 that they “were training to assassinate George Soros, Hillary Clinton, and Barack Obama, because of these individuals support of Antifa,“or anti-fascists, according to the complaint.

Members call Hopkins their “commander” online and in evidence presented to the federal court. A Patriots spokesman, Jim Benvie, dismissed the allegations as “fake news.” He posted a video saying that that it may move its base from the Sunland Park to another location because of excessive media attention.

“It’s a false narrative that we’re a bunch of armed lunatics and we’re holding kids at gunpoint,” Benvie said.

Hopkins is barred from possessing weapons because of three felony convictions. According to the FBI he was first convicted of illegal weapons possession in Michigan in 1996, and then again in Klamath County, Oregon, in 2006, along with a charge of impersonating a peace officer.

According to a police report in the Oregon case, Hopkins showed two firearms to a group of juveniles and a badge that said “special agent.”

New Mexico Gov. Michelle Lujan Grisham said last week that she was working with state and local police to address the armed groups. “Menacing or threatening migrant families and asylum-seekers is absolutely unacceptable and must cease,” she wrote on Twitter.

The American Civil Liberties Union of New Mexico wrote Lujan Grisham and state Attorney General Hector Balderas on Thursday, urging them to investigate the incidents, including what it said was the detention of nearly 300 people on Tuesday near Sunland Park.

Armed civilian groups have been a fixture on the border for years, especially when large numbers of migrants come. But, unlike previous times, many of the migrants are children. In the Border Patrol’s El Paso sector, 86% of arrests in March were people who came as families or unaccompanied children.