PHILADELPHIA (AP) — The criminal history of a man suspected of barricading himself inside a Philadelphia rowhome should have prevented him from legally owning the firepower he used Wednesday to wound six police officers in a standoff that carried deep into the night, authorities said.

Maurice Hill, who authorities say had at least a semi-automatic rifle and a handgun when he opened fire on officers serving a drug warrant, has on his record multiple arrests in Philadelphia and adjacent Delaware County between 2001 and 2012, according to online records.

He has convictions for an array of crimes that include assault, perjury, fleeing and eluding, escape and weapons offenses.

Hill, 36, served two stints in state prisons — three, counting a return for a probation violation. He was also hit with a 55-month federal prison term over a pair of convictions for being a felon in possession of firearms.

Pennsylvania prison officials said Hill served about 2½ years on drug dealing charges and was paroled in 2006, and then did more than a year for aggravated assault before being released in 2013. 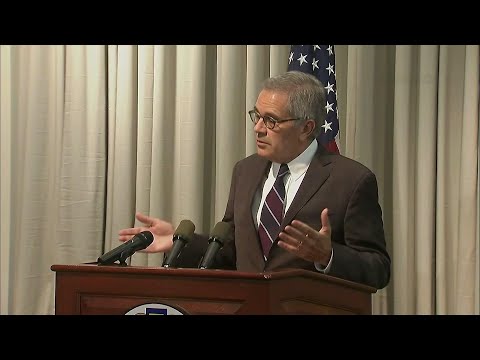 “I think what it says is that the system had multiple contacts with this man, and the system ... did things that obviously did not stop this incident,” Krasner said.

Authorities are trying to determine whether there is an outstanding warrant pending against Hill, based on a docket reference to a March 2018 probation violation, said Philadelphia-based U.S. Attorney William McSwain.

“He’s an individual who spent most of his adult life sort of bouncing in and out of the criminal justice system,” McSwain said.

The prospect of a return to prison was on Hill’s mind during telephone negotiations to end the nearly 8-hour standoff, Philadelphia Police Commissioner Richard Ross said.

Hill told him he had an extensive record and “did not want to deal with prison again,” the commissioner recounted.

Ross expressed amazement that the standoff ended with no one dead and no life-threatening injuries, despite the gunman firing over 100 rounds.

The six officers who were struck by gunfire were released from hospitals Wednesday night.

Ross said officers “had to escape through windows and doors to get (away) from a barrage of bullets.”

It “could have been far worse,” Ross said Thursday outside the Philadelphia Police Department. “This was a very dynamic situation, one that I hope we never see again.”

Hill, who has so far not been charged with crimes, came out of the home in the wee hours of Thursday after police used tear gas. He was taken to a hospital for evaluation and then placed in custody.

The tear gas prevented investigators from entering the house for much of Thursday, but members of the crime scene unit were seen moving in and out of it in the evening.

While standoffs with police are not uncommon, the situation in Philadelphia drew particular attention because of how long gunfire was exchanged and the fact that the commissioner made the unusual decision to speak to the shooter directly and that two police officers were trapped during the standoff.

Those officers were safely extracted by a SWAT team, as were three people that officers had taken into custody inside the house before the shooting broke out.

Hill’s lawyer, Shaka Johnson, said Hill called him during the standoff asking for help surrendering. Johnson then called Krasner, and the two men patched in both Hill and the police commissioner, according to Krasner.

Hill told Johnson he wanted to make it out alive to see his newborn daughter and teenage son again.

On Thursday, politicians from Pennsylvania called for new gun control measures. Democratic Mayor Jim Kenney told reporters he called on state and federal lawmakers to “step up or step aside” and let cities deal with the problem themselves. He did not give specifics on what he wanted to see done.