City officials meet with family of man killed by police

HOOVER, Ala. (AP) — Officials in an Alabama city met with the family of a black man killed by a police officer and apologized for wrongly describing him as the gunman in a Thanksgiving night shooting at a crowded mall.

The meeting came after days of protests since the death of Emantic “EJ” Bradford Jr.

Police said an officer killed Bradford after seeing him with a gun moments after a shooting at the Riverchase Galleria mall. Authorities initially identified Bradford as the shooter, but later said they were wrong and evidence indicated he did not fire the rounds that wounded two people that night.

“Chief Derzis acknowledged and apologized for the issuance of an inaccurate public statement in the wake of this tragedy that implied that Mr. Bradford was the suspected shooter.”

The statement said city officials “answered any questions that they could” during the meeting.

Ben Crump, a lawyer for the Bradford family, confirmed that the meeting occurred and said there were “deep emotions on both sides.” 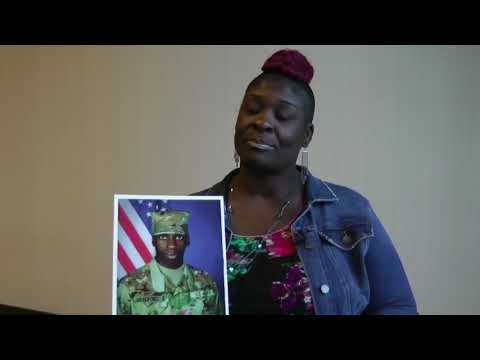 “It was a very emotional and intense meeting,” Crump said Wednesday evening.

Crump said the family repeated their demand to “just release the video” of body camera and other footage of the fatal encounter on the second floor of the shopping mall.

“The family still wants to know the truth of what happened and the fact that they didn’t get any closer to the truth caused them to still be very disappointed that they are still devastated that E.J. has been killed and that this information was released to defame his character and assassinate his character,” Crump said.

Family members as late as Tuesday afternoon expressed frustration that police never contacted them to notify them what happened to their son. Bradford’s mother April Pipkins said she had to call the coroner’s office on her own to get confirmation of her son’s death.

Bradford’s death followed a string of highly publicized police shootings of black men, and Pipkins said she believes her son would still be alive had he been white.

“I think the whole scenario would have played out differently, I really do,” Pipkins told The Associated Press in an interview Tuesday.

“I love my son, but I can’t hear him say ‘daddy,’ I can’t see him. And I want him to be there for me, and I don’t want to bury my boy like this,” Bradford said.

The shooting sparked days of protests.

Demonstrators have urged a boycott and vowed to “shut down” Hoover, a city of 85,000 people that is heavily dependent upon retail sales from the Riverchase Galleria mall where the shooting occurred. With more than 150 stores, the shopping center is the largest mall in Alabama.

The city canceled a Christmas tree lighting that had been scheduled for Thursday.

“We want healing for the community, and we invite all persons of every faith to pray for the Bradford family and encourage all houses of worship to pray for God’s help in unifying our community,” the statement said.

A funeral service for the 21-year-old Bradford is set for 10 a.m. Saturday at the 5,000-seat Boutwell Auditorium in Birmingham.

No one has been arrested in the gunfire, which injured a young girl and a man identified as a friend of Bradford.