Oregon teachers walk out in red to press for school funding

SALEM, Ore. (AP) — Tens of thousands of teachers across Oregon walked off the job Wednesday to demand more money for schools, holding signs and wearing red shirts that have become synonymous with a nationwide movement pushing lawmakers to better fund education.

Schools around the state, including Oregon’s largest district, Portland Public Schools, closed for at least part of the day. Most offered day care and free lunch programs.

An estimated 25,000 people massed in a downtown Portland park for a rally before marching through the city. The mix of teachers, parents and students wore red to support the “Red for Ed” campaign that’s taken hold nationwide and chanted that slogan.

It was one of many protests statewide that called on lawmakers to expand school funding in Oregon, which has some of the largest class sizes and lowest graduation rates in the United States.

Kathy Paxton-Williams, who attended public school in Oregon and has been teaching in Portland for more than 20 years, said she has seen dramatic changes.

The walkout follows a wave of teacher activism that began in West Virginia in 2018 and was followed by Oklahoma, Kentucky, Arizona and elsewhere. Teachers in North Carolina and South Carolina rallied at their respective state capitols last week seeking more money. 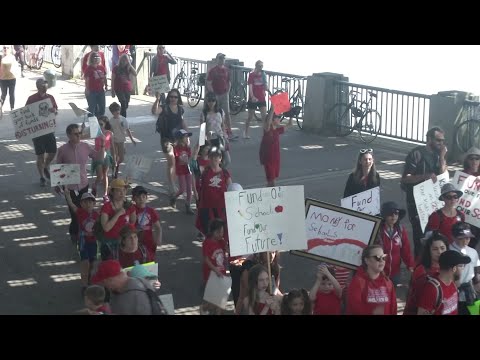 Unlike other states, Oregon teachers are not seeking pay raises or other union demands. They say they’re walking out to highlight classroom conditions and how years of low funding has affected learning opportunities.

Some school administrators didn’t agree with the walkout. In Grants Pass, one of Oregon’s most conservative cities, students are volunteering to wash firetrucks or play music in nursing homes to show why the community should value education, Superintendent Kirk Kolb said.

“Walking out of school and closing school, we agree that’s not a message we want to represent,” Kolb said. “We have to be there for our kids because they rely on us to provide them a real positive, stable place.”

Districts decided whether to close schools, and in many cases, they will have to make up for the lost time.

Portland Public Schools, for example, closed all day when more than 500 teachers said they would participate, spokesman Harry Esteve said. The district is adding a day to the end of the year.

The walkout comes as Republican senators are blocking a vote on legislation to raise $1 billion a year for schools. The absence of all 12 Republicans for a second day Wednesday denied the Senate enough members to vote on the half a percent tax on some of Oregon’s wealthiest businesses.

Republicans say the tax plan would raise the prices of consumer goods without fixing the education system. They also said they would not support a funding package that doesn’t address the state’s pension debt, which has soared past $25 billion.

GOP Sen. Tim Knopp says Republicans are “in for the long haul” and won’t return to the state Capitol in Salem until majority Democrats agree to renegotiate.

About 1,500 teachers and supporters marched to the state Capitol, chanting, “Do your job!” to press Republicans to come back to vote. They poured inside and shouted their support for fully funded schools.

“It just mystifies me that adults just can’t sit in a room and do what’s right for kids,” he said.

Oregon schools are unusually dependent on state money after voters changed the school funding formula in the 1990s in an effort to limit property taxes. Since then, lawmakers have struggled to find an adequate source of revenue to keep up with rising costs.

The walkout builds on the previous strikes nationwide but also shows teacher demands are going beyond pay, said Robert Bruno, an expert on teacher labor issues at the University of Illinois, Urbana-Champaign.

“Now the issues are far more diverse, and they’re about cultural inclusion, they’re about fighting poverty, about making sure that you get schools some nurses,” he said.

For example, teachers in Woodburn say they need more counselors and support staffers to respond to the increasing number of students displaying complex behavioral problems. A third of students are English language learners and over 40% of families rely on food stamps in the town about 30 miles (48 kilometers) south of Portland.

“They have to be both a teacher and a counselor to the more than 30 kids in their class,” said Cherene Mills, a teacher at Valor Middle School.

Some parents said they understood the reasons behind the walkout.

“It’s inconvenient, yeah, but it’s something that has to happen,” said Armando Gonzalez, who said he worked from home to care for his two daughters. “But, hey, what’s a little inconvenience when it’s about doing right by our kids?”