WASHINGTON (AP) — The Justice Department said Thursday that it has criminally charged about 225 individuals over the past year in connection with fraud scams that victimize people age 60 and older.

Attorney General William Barr and other law enforcement officials announced what they said was the department’s largest-ever nationwide crackdown on elder fraud schemes. In addition to the criminal charges, the department has brought civil cases against dozens of other defendants. All told, officials said, there were more than 260 criminal and civil charges filed in the past year.

“This is a particularly despicable crime, and it’s a massive and growing problem,” Barr said at a news conference. “It’s despicable because the people involved are vulnerable and because of their stage in life, they don’t have the opportunity frequently to recover. And so these losses are devastating to them.”

Barr said authorities “have to prosecute an all-out attack on this type of crime.”

Among the defendants identified by the department are two people who prosecutors say ran a telemarketing scam out of Costa Rica and swindled victims by telling them they had won prizes in sweepstake contests and needed to transfer large sums to collect the prizes. The two were extradited to face charges in North Carolina. 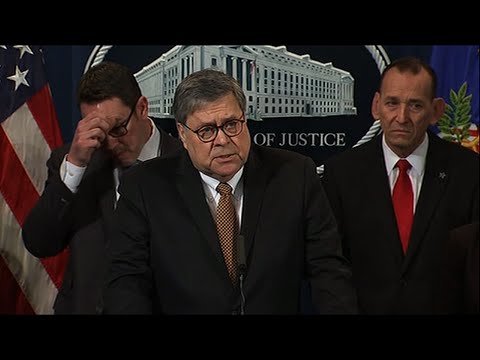 Among the would-be victims highlighted were William Webster, the former director of the FBI and CIA, and his wife, Lynda. The couple described at the press conference how they were targeted by a man from Jamaica who threatened them and sought to extort millions of dollars over the course of several years. The Websters involved the FBI, which arrested the man after he arrived in the U.S.

“I think it’s important to let (older people) know there are ways they can check out these calls, and should,” Webster said.

It was Barr’s first news conference as attorney general. He made opening remarks but, as the delivery of special counsel Robert Mueller’s report looms, left the podium without taking questions.