ST. PETERSBURG, Russia (AP) — As a child during the World War II siege of Leningrad, Galina Yakovleva learned how to make the best of fearful times. Today she’s using those lessons as she brings food and supplies to needy people locked down in the coronavirus pandemic.

The 80-year-old drives a white minivan every day through the city, now named St. Petersburg, on a one-woman charitable mission for the elderly and needy families with children. She’s been doing this for a decade and hasn’t let the virus deter her.

“I’m not afraid of it; I drive my van alone,” she said. “My soul does not let me leave all my people in need without attention.”

“I have arrangements with certain food stores and grocery depots on certain dates of the month. So if I don’t pick up what I am to get, that food will get spoiled and people who need it won’t get it.”

Wasting food is abhorrent to someone who went through the privations of the 1941-44 siege, when the city came under bombardment from Nazi forces, supply lines were cut off and some 800,000 civilians died.

“We never threw away anything. … How can you throw away bread?” she said. 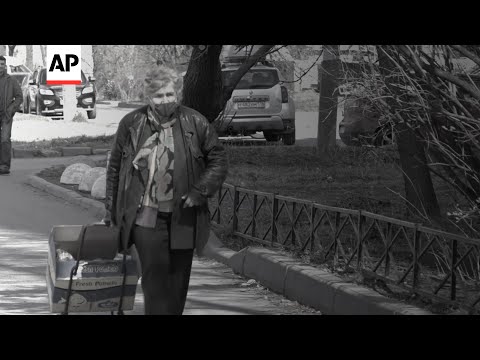 The kindergarten she attended was bombarded, forcing her and some other children to hide in a cast iron pipe. The shock was so great that she didn’t speak for year afterward, she says.

In adulthood, Yakovleva held several jobs in which she learned skills that she now uses to collect and distribute aid: She variously drove a tractor, an ambulance and a trolley bus.

Yakovleva organized her Dobrota (Kindness) Foundation about 10 years ago to help socially disadvantaged people. She built connections with the city food stores, bakeries, farms and even theaters.

The operation is a lifeline for more than 500 people.

Her activities haven’t changed much during the pandemic, except for some adjustments in picking up and delivering the goods. Men now load her van without direct contact with her and she sometimes leaves her deliveries at a doorstep.

But many of her care recipients still open the door for her and want to communicate.

“I don’t know how I’d live here indoors for a month if not for Galina. She brings me milk, bread, everything so I won’t die from hunger”, said Lyubov Travkina, 83. “I’m amazed. This person lives only for others, not for herself.”

“We should always think of helping others, at least a bit. Not just lie on the sofa,” Yakovleva said.