EAST LANSING, Mich. (AP) — The government this week levied an unprecedented $4.5 million fine against Michigan State University in the Larry Nassar sexual assault scandal. The U.S. Education Department has extraordinary muscle over schools that participate in federal student aid programs. Colleges must follow the Clery Act, which requires them to publicly disclose campus crime statistics and security information, or they could be cut off.

It also requires them to prevent and investigate possible crimes, such as Nassar’s serial assaults, which were reported to some officials long before he was charged in 2016.

“I don’t think any senior administrator I’ve ever worked with would consider a $4.5 million fine to be a drop in the bucket. The Department of Education was intending to send a message,” said Dolores Stafford, executive director of the National Association of Clery Compliance Officers and Professionals, which has 950 members.

A look at the law and the latest fallout from the Nassar scandal:

The law is named for Jeanne Clery, a 19-year-old Lehigh University student who was murdered in her dorm room in 1986. It began as a way to inform students and families about campus crime trends but has been expanded to include much more, such as fire safety, crimes near campus, the location of sex offenders and results from disciplinary proceedings against students. 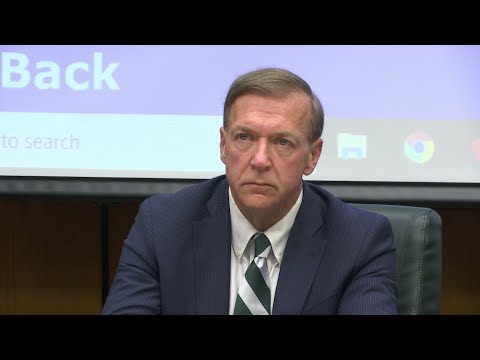 Students and employees who are crime victims must be told about services, including counseling, new housing and transportation.

Since 2016, the government has proposed $6 million in fines against 35 schools for various Clery Act violations, according to numbers compiled by Stafford’s group. She didn’t know how much actually was collected. Fines can be reduced through negotiations. The Education Department didn’t return an email seeking comment.

Before the Michigan State fine, the largest was a $2.4 million fine against Penn State University over its handling of sexual misconduct involving assistant football coach Jerry Sandusky. The University of Montana in January said it got a $966,000 fine reduced to $395,000. The issue was reporting errors, not Montana’s response to crimes.

WHAT HAPPENED AT MICHIGAN STATE?

Nassar was a campus sports doctor who treated Olympic gymnasts at USA Gymnastics as well as gymnasts at Michigan State and a Lansing-area gym. He’s serving decades in prison for sexual assault and child pornography crimes. More than 300 victims, mostly young women and girls, say he molested them under the guise of treatment for back problems and other injuries.

Nassar was charged in 2016, but victims say he could have been stopped years earlier if campus officials, including gymnastics coach Kathie Klages, had responded to complaints.

“What transpired at Michigan State was abhorrent, inexcusable and a total and complete failure to follow the law and protect students. ... Never again should incidents of sexual misconduct on campuses or anywhere be swept under the rug,” Education Secretary Betsy DeVos said Thursday in announcing the fine.

HOW IS MICHIGAN STATE RESPONDING?

Michigan State wired $4.5 million to the U.S. Treasury on Friday. The school’s new president, Samuel Stanley Jr., who arrived Aug. 1, also announced sweeping changes. The school will have a Clery Act compliance officer and a compliance committee, and will require specialized training for anyone who investigates sexual violence, among other campus reforms.

Campus clinics must get consent from patients before any sensitive medical procedures. Chaperones will be available. Crime statistics will be revised to account for Nassar’s crimes.

“I hope you find my administration is committed to taking the actions and to making the changes necessary to address the weaknesses and failures of the system and of people who, intentionally or not, failed to address the root causes of this abuse,” Stanley said at a public meeting Friday.

Yes. Even before the government penalized Michigan State, a fall Clery Act training event organized by Stafford’s group was sold out, she said.

“DeVos is using MSU as the poster child to teach other institutions what not to do. The fines are becoming more of a compelling tool now that they are reaching into the millions for egregious violations,” said Brett Sokolow of the NCHERM Group in Berwyn, Pennsylvania, which advises schools on health and safety issues.

“Given how many people were affected, and how poorly MSU handled this throughout the whole time, I really do think that there is a good case to be made that (the fine) could have been higher,” she said.