Central Illinois residents on Monday continued assessing damage from rare December tornadoes, including a half-mile-wide one that injured at least 20 people.

The state’s severe weather was part of a line of thunderstorms that raked areas of the central U.S. late Friday and into Saturday, killing one person in Missouri. The National Weather Service confirmed tornadoes in Illinois, Missouri and Oklahoma. And in Arkansas, at least three tornadoes that largely caused property and structural damage were confirmed in the northwest and southwest parts of the state.

Peak months for tornadoes in much of the Midwest are April and June, according to the weather service. But at least 23 tornado touchdowns on Saturday have been confirmed in Illinois, said Dan Smith, a meteorologist with the weather service’s Lincoln, Illinois, office. That was the most tornadoes in Illinois during a December storm since a Dec. 18-19, 1957, outbreak produced 21, Smith said Monday afternoon.

He said that number may grow because crews continue surveying three other sites to determine if storm damage there was also caused by tornadoes. 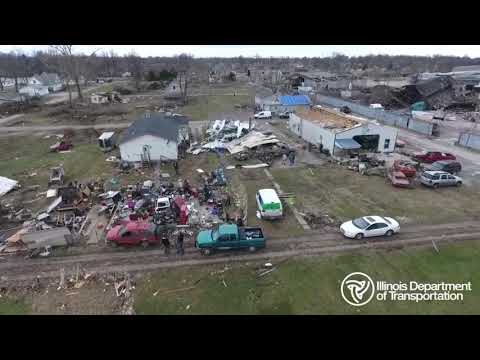 It said information from emergency management officials indicated 34 homes were severely damaged or destroyed, 66 homes sustained major damage, and 406 homes were damaged but inhabitable in the city of 11,000.

Photographs and video from Taylorville showed several houses flattened, with residents wading into debris to salvage what they could. Some homes remained standing but with gaping holes in the roofs or with no roofs at all.

The tornado was on the ground for around 10 miles (16 kilometers) before it thundered through Taylorville, and the weather service was able to warn residents of its arrival 41 minutes before it actually struck, Chris Miller, a meteorologist at the service’s Lincoln office, said Sunday. That advanced warning gave people critical time to take cover and may have saved lives.

The weather service said Sunday that a strong tornado that developed from severe thunderstorms Friday night touched down in Van Buren, Arkansas. It was rated an EF2. About 10 minutes later, a second weaker tornado was confirmed less than 10 miles (16 kilometers) away near the town of Rudy, Arkansas.

Damage surveys for the two tornadoes are ongoing but officials said dozens of homes were damaged.

Early Saturday a third tornado with estimated peak winds of 107 mph traveled about 8.5 miles (13.5 kilometers) through Spring Hill in southwest Arkansas. Its path was intermittent and mostly caused damage to trees and some structures.