SANTA ANA, Calif. (AP) — A paraplegic man previously represented by Michael Avenatti has filed a lawsuit alleging the embattled lawyer failed to pay him millions he was due in a settlement with Los Angeles County.

Geoffrey Johnson filed the lawsuit Tuesday against Avenatti and his former associates. It claims they neglected to pay him after the county cut a $4 million check in 2015 in a settlement over severe injuries he suffered in Sheriff’s Department custody.

Johnson, who became paraplegic following a suicide attempt in jail where he said authorities failed to address his mental health needs and where he was assaulted, said Avenatti told him he would be paid once a trust had been established.

Instead, Avenatti began sending him monthly checks ranging from $900 to $1,900 to purportedly front him some money, said Daniel J. Callahan, Johnson’s new lawyer.

Johnson learned he was duped earlier this year when Avenatti was charged in federal court with bank and wire fraud, Callahan said.

“It’s a tremendous breach of obligation one owes to the client to misappropriate those funds,” Callahan said at a news conference Thursday. “It is off-the-charts bad.”

Avenatti has pleaded not guilty to the federal allegations. He said in a statement that Johnson previously agreed he had conducted himself ethically and that the firm paid his medical and living expenses for years before the settlement. 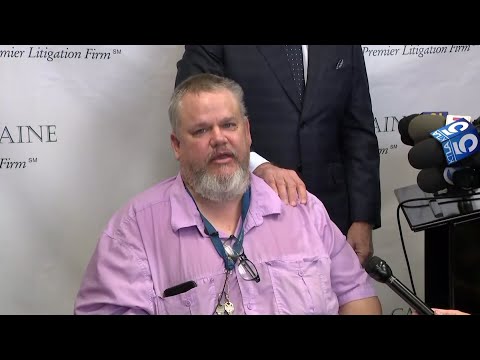 He also said they provided him with settlement funds after deducting the cost of handling the case and a contingency fee. “Mr. Johnson’s claims are categorically false and frivolous, and his case will be thrown out of court,” the statement said.

But Avenatti is now on the defensive with criminal charges in New York and California, a former law associate seeking to collect a $10 million judgment against his firm, and a request by the California State Bar to place him on involuntary inactive enrollment.

Callahan said the associate, Jason Frank, and others also had a responsibility to see Johnson got his money. Frank and attorney Scott Sims — who has represented Frank in his collections bid and previously worked for Avenatti’s firm— are also listed as defendants.

Sims said in a statement that the lawyers recently discovered that Avenatti took the money and promptly reported it to federal authorities. “We are appalled by Mr. Avenatti’s conduct and hope that Mr. Johnson obtains justice against Mr. Avenatti,” the statement said.

In the civil lawsuit filed in Superior Court in Orange County, Johnson said he has lost more than the settlement funds in the process, including a deal to buy a house and his Social Security benefits.

When asked by reporters what he would like to say to Avenatti, he answered, “I wish you’d just given me my money.”