Why Rachel Chavkin is a rarity on Broadway these days

NEW YORK (AP) — As another season on Broadway draws to a big finish, the opening of “Hadestown” marks a milestone of sorts — it’s the only new musical directed by a woman, Tony Award-nominee Rachel Chavkin.

While the lack of women at the helm of projects remains a systemic problem in film and television, it also remains on Broadway, despite the theater community embracing inclusion on stage with gender identity and non-traditional casting. But when it comes to directors, there’s still a gender imbalance.

“It’s pretty shocking,” Chavkin recently told The Associated Press at the “Hadestown” press day. “One of the oldest truths is that a woman or artist of color has to prove themselves, not just once, but multiple times, in a way that a special white man or mediocre white man may not have to.”

Of the 36 shows currently on Broadway, only three musicals are directed by women. Other than Chavkin’s show, there’s also Diane Paulus’ ”Waitress ” and Julie Taymor’s ”The Lion King .”

Some say the disparity begins right at the origin of a show, when the director is chosen for the off-Broadway or regional production, and they ride it into Broadway. That was the case for Chavkin as it led to her Broadway debut a few years ago, and her return this season. 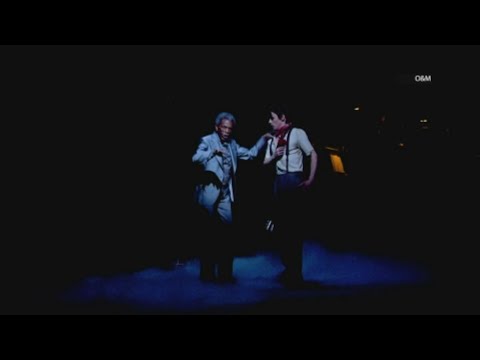 “I had the great fortune of coming to Broadway in 2016 with a show, ‘Natasha, Pierre, and the Great Comet of 1812,’ and that was a show I originally directed in an itty, bitty space,” Chavkin.

Then there’s the financial component: Broadway shows have a much higher capitalization, so more is at stake. Producers tend to play it safe by going with people they have already worked with, and an overwhelming majority of those established directors are male.

“We are talking about more money, but as long and as soon as producers realize if someone is doing good work off-Broadway or regionally, they are ready for this next step, I think we will see the Broadway community radically expand with both women and artists of color,” Chavkin said

Making inclusion part of the conversation can bring attention to the problem. In her frustration for leveling the playing field, Chavkin pointed out that those producers and leaders that praise the outspoken voices at awards shows could focus more on attainable solutions, such as gender disparity.

“I think that goes to producers putting their money where their mouth is. If they applaud artists who speak out at awards ceremonies against our current administration and its policies, we should see those same producers investing in women and artists of color,” Chavkin said.

Besides Chavkin, the music and book for “Hadestown,” was written by a woman, Anais Mitchell , and the show’s lead producer is also a woman, Mara Isaacs.

Isaacs doesn’t see the lack of women directing on Broadway as intentional, rather as a by-product of a male-dominated industry. “Even people with the best intentions tend to hire people that look like them,” she said.

Isaacs strives for a place where talent is the only factor to decide who gets the job. That’s what appealed to her about “Hadestown.”

“I don’t think in terms of gender. This group just happens to be the right team,” Isaacs said. “I’m never going to hire a woman just because she’s a woman.”

Victoria Myers, the editor-in-chief of The Interval , an online magazine exploring the role of women in theater, argues there are competent women working off-Broadway who are ready to step up when called upon.

“I would say there are female directors that would do anything on Broadway, and they’re ready. You can call them today, and they would be ready,” Myers said.

Patrick Page, who stars as King Hades in ”Hadestown ,” has been worked as a stage actor for more than 35 years. He laments he’s only worked with three female directors during that time.

“What’s astonishing they’re three of the best directors I ever worked with, which could be completely an accident. But it doesn’t seem like one,” Page said.

Based on the concept album of the same name by Anais Mitchell, the folk opera “Hadestown” tells the intertwining love stories of King Hades and his wife, Persephone, as well as young lovers Orpheus and Eurydice.

Mitchell sees some hope in the future. Recently she took her 5-year-old daughter to her latest Broadway show at the Walter Kerr Theatre.

“I brought her to see our marquee at the theater, and she looked up and saw my name and Rachel’s name, and I felt very proud to show her a Broadway marquee with two women’s names on it, and she doesn’t know that’s a rare thing. And hopefully, in her day, it won’t be rare,” Mitchell said.