CEOs of big banks face off with House Democrats

NEW YORK (AP) — The heads of seven of the largest banks in the U.S. fielded sometimes contentious questions from a House committee on Wednesday, some dealing with current risks to the financial system and other focused on more politically-charged topics.

The appearance by the chief executives of JPMorgan Chase, Goldman Sachs and five other banks represented the largest gathering of leaders of the banking industry before Congress since the financial crisis.

The CEOs told members of the House Financial Services Committee they’ve taken steps to improve the stability of their institutions since the financial system nearly seized up in 2008. The banks have raised capital, are more diverse, have closed businesses and are more resilient than they were before the financial crisis, the CEOs said.

“There is no doubt that the strength, stability and resiliency of the financial system has been fundamentally improved over the course of the last ten years,” said Jamie Dimon of JPMorgan. “Post-crisis reforms have made banks much safer and sounder in three important areas: capital, liquidity and resolution and recovery.”

The backdrop of this hearing is the 10-year anniversary of the 2008-2009 financial crisis. The banking system required extraordinary efforts by regulators — and a bailout by U.S. taxpayers — in order to survive. All seven banks appearing in front of Congress received funds under the $700 billion Troubled Asset Relief Program, and all paid billions of dollars in penalties and fines for their behavior heading into the housing bubble. 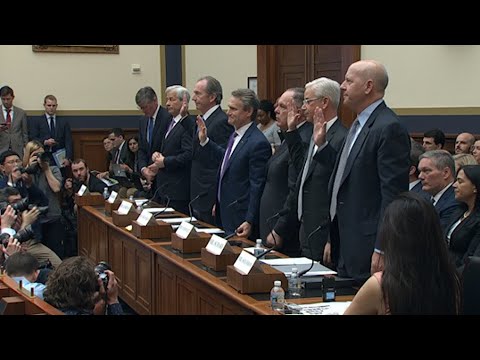 “I am concerned that several of these institutions are simply too big to manage their own operations, too big to serve our communities and too big to care about the harm they have caused,” said Rep. Maxine Waters, D-California, who is the chair of the Financial Services Committee.

The hearing had some policy questions, but many members of Congress took their time to ask politically-charged questions of the CEOs, on topics ranging from gun regulations to executive compensation to climate change. Democrats took their time to laud Bank of America and Citigroup’s decision not to finance gun manufacturing companies, while Republicans took their turns to lambast them. Democrats also focused a significant part of their time on whether banks delegated too much capital toward stock buybacks instead of reinvesting in their individual businesses.

Rep. Jim Himes, D-Connecticut, asked all CEOs what they considered to be the products or businesses most at risk in the banking system. No CEOs mentioned home mortgages — the product that caused the 2008 financial crisis — but instead the two dominant answers were cybersecurity risks and growth of leveraged corporate lending, or lending to companies with already large debt loads. Another threat mentioned was “shadow banks,” which is a term used to describe non-bank companies getting into financial products, particularly financial technology companies.

A Republican congressman, Steve Stivers of Ohio, asked the CEOs what they considered the biggest non-business risks to the banking system. The CEOs talked about how economic growth is slowing across the globe, and again mentioned cybersecurity as a big risk to the banking industry.

Along with Dimon, among those appearing were David Solomon of Goldman and Brian Moynihan of Bank of America. The CEOs of Citigroup, Bank of New York Mellon, State Street and Morgan Stanley also testified. One executive not at the hearing was Tim Sloan, who resigned from his position at Wells Fargo last week, days after a separate appearance before the same committee.

Of the group, only one is still running the same firm as he was 10 years ago: Dimon. All other CEOs at the other firms were replaced either shortly after the financial crisis, or their predecessors decided to retire in the last year.

The hearing comes after the banking industry had a record year for profits in 2018, thanks partly to the tax cuts passed by Republicans in late 2017. Meanwhile, the banking industry’s lobbyists have been pushing Congress to further unwind the rules and regulations put into place after the 2008 financial crisis.

Democrats, who control one part of Congress, are not likely to go along with any major overhaul to regulations. Instead the banks have been focusing their attention on getting changes at their regulators, like the Federal Reserve and the Office of the Comptroller of the Currency.

“Dodd-Frank has not done anything bad to your bottom line” Waters said, referring to the Dodd-Frank Act, the law passed after the financial crisis to reorganize the banking system. Waters warned the CEOs not to push too heavily for changes at their regulators.

And in a note to how long the hearing lasted — nearly seven hours — Waters said she would bring the CEOs back to testify next year, in smaller groups.

Ken Sweet covers the banking industry and consumer financial issues for The Associated Press. Follow him on Twitter at @kensweet.