No bond for suspect in officer’s death; mental illness cited

HOUSTON (AP) — Attorneys for a man accused of fatally shooting a Houston officer said Monday that their client has a history of mental illness, as a judge ordered him to remain jailed without bond.

Anthony Osso, one of Solis’ court-appointed attorneys, told reporters afterward that Solis cried during the hearing. Osso described Solis as quiet and said he didn’t appear to be an assertive individual.

Osso said Solis had been diagnosed as mentally ill when he was in the juvenile system, but he was still learning some of the specific details about his history with mental illness.

“We always ask that the public wait to hear all the facts in the case,” Osso said. “We’ve lost an officer, and that’s difficult for everybody. We as a society don’t like to see this kind of violence occur. I think facts will come out about Mr. Solis in the future and we’ll just see how it plays out.”

Solis’ father, Roberto Solis, told the Houston Chronicle his son showed signs of mental illness as a teenager and had armed himself recently after someone broke into his home. 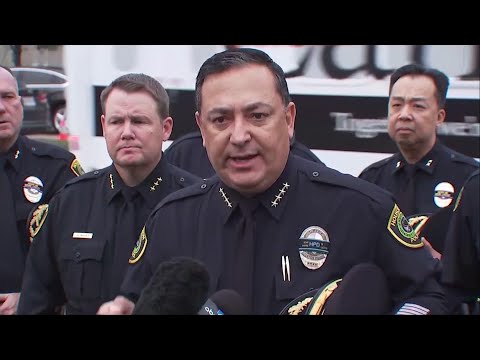 John Brewer, one of the prosecutors handling the case for the Harris County District Attorney’s Office, said he was not aware of any mental illnesses in Solis’ history. Solis has several prior misdemeanor arrests.

Brewer said the 32-year-old officer’s fatal shooting has been “devastating.”

“All we can try to do is say a prayer for the family, keep them in our hearts and our minds and see that justice is done,” Brewer said.

Police officials said that Brewster was shot just before 6 p.m. Saturday as he was responding to a domestic violence report.

Police received a call from a female victim who said her boyfriend was assaulting her and that he was armed with two firearms. Police didn’t find the couple at the provided address, but Brewster spotted them three streets away on Houston’s east side.

According to a probable cause affidavit read in court Monday, Brewster got out of his vehicle and saw the woman pointing in the direction of Solis.

Solis fled on foot but was captured a short time later at a nearby elementary school. Police recovered both handguns that Solis had.

Solis apparently made several statements after his arrest inquiring about Brewster, saying “something along the lines of, ‘Is he OK?’” according to the affidavit.

Solis also told police that if people had come outside when he was fleeing, “he may have chosen to shoot them as well,” according to the affidavit.

Solis’ next court hearing is set for Feb. 12.

The city is honoring the slain officer with blue lights shining on City Hall, the Montrose Boulevard bridges over U.S. 59 and the Lyric Opera garage through Wednesday night. Brewster’s visitation is scheduled for 5 p.m. to 8 p.m. Wednesday at Sagemont Church in southeastern Houston. Funeral is scheduled for 10 a.m. Thursday at nearby Grace Church Houston.

In 2015, Solis pleaded guilty to a misdemeanor domestic violence charge for hitting his then-girlfriend. As a result, he should not have been able to own a gun for five years under Texas law, said David Kwok, an associate law professor at the University of Houston Law Center.

Osso said he will also be investigating how Solis got his guns.

Efforts to pass the bill, which helps victims of domestic and sexual violence, have stalled in the Senate. That’s in part due to a provision that closes the so-called “boyfriend loophole” and makes it easier to take away guns from violent offenders, even if they are not a spouse or domestic partner. The National Rifle Association has fought against the provision.

“And who killed our sergeant? A boyfriend abusing his girlfriend. So you’re either here for women and children and our daughters and our sisters and our aunts or you’re here for the NRA,” Acevedo said.

The fatal shooting of the Houston officer was one of three killings of police officers nationwide in a two-day period.