SANTA BARBARA, Calif. (AP) — The Latest on the scuba diving boat fire off the coast of California that is presumed to have killed 34 people: (all times local):

Federal investigators have interviewed the captain and other crew members of a scuba diving boat that caught fire and sank off of Southern California, killing 34 people.

Jennifer Homendy of the National Transportation Safety Board says Tuesday that the captain, the boat’s owner and others underwent hours of detailed questioning. She won’t disclose details.

The captain and four crew members are the only survivors of a pre-dawn Labor Day fire aboard the Conception off the Channel Islands.

Authorities say they were on deck, while those sleeping below were trapped by the quick-moving blaze.

All but one body has been recovered.

Homendy says crew members were given alcohol and drug tests. She says the alcohol tests were negative, and the drug results are pending.

The boat’s fire protection systems will also be checked. The Coast Guard says the vessel wasn’t required to have sprinklers.

A visual effects designer who was known for his work on films such as “Spider-Man” and “Green Lantern” was on the scuba diving trip off the Southern California coast that ended with a boat fire that killed 34 people sleeping below deck on Labor Day. 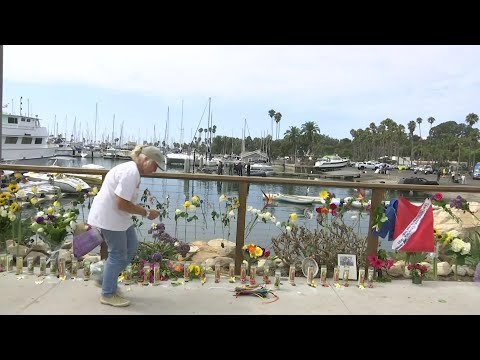 The wife of Charles McIlvain confirmed he was aboard to The Associated Press on Wednesday. Filmmaker Jasmine Lord said she was not ready to talk yet.

McIlvain worked as a visual effects designer for Walt Disney Imagineering and a pipeline engineer and technical animation supervisor at Sony Pictures Imageworks.

He says he had a “unique combination of creativity, intelligence and wonderful presence.”

The only crew member who died when a dive boat caught fire off the Southern California coast was a 26-year-old woman who always dreamed of working on the water.

Doris Lapporte said Wednesday by telephone that her granddaughter, Allie Kurtz, recently left a job working in movie promotions to follow her love of the ocean.

Lapporte says that as a girl Kurtz used to kid she wanted to be a pirate someday and dreamed of owning her own boat.

Kurtz, of Santa Barbara, was a deckhand on the Conception, which was carrying 33 scuba diving enthusiasts and six crew when it caught fire early Monday and sank near Santa Cruz Island, one of the Channel Islands west of Los Angeles.

Kurtz’s sister, Olivia Kurtz, said going to work on the Conception was her sister’s dream job.

Apple says an engineer, his wife, daughter and another Apple employee were on board the scuba diving boat consumed by fire off the coast of Southern California on Labor Day.

O’Brien told the Mercury News that they were celebrating Tia’s 17th birthday.

San Francisco’s ABC affiliate, KGO, reports that 52-year-old hairdresser and photographer Lisa Fiedler from Mill Valley was a passenger on the boat, according to her mother Nancy Fiedler. She says her daughter loved nature.

Authorities say they have recovered the bodies of 33 people who died in the scuba diving boat fire that happened off the coast of Southern California.

Coast Guard Lt. Zach Farrell said Wednesday that 13 bodies were recovered Tuesday and that one person is still missing.

The boat caught fire before dawn on Monday. Authorities previously said 34 people aboard who were below decks sleeping were presumed dead and that five crew members including the captain escaped.

Authorities say divers were expected at daybreak to resume searching for remains of the victims who died in the scuba diving boat fire off the Southern California coast.

Huddle on Tuesday would not say how many bodies were discovered during that day’s search for remains. Authorities previously said the remains of 20 people have been recovered and that four to six more have been located on the ocean floor but not retrieved.

Thirty three passengers and one crew member are presumed dead.

A family of five along with high schoolers, an adventurous marine biologist and a science teacher are among those believed lost in the fiery sinking of a scuba boat off the Southern California coast.

Authorities believe all 34 people who were sleeping below deck perished when flames raced through the boat before Monday as it anchored off Santa Cruz Island northwest of Los Angeles.

The search for other survivors ended Tuesday. At least 20 bodies have been recovered and officials continued efforts to bring in others spotted on the ocean bed. Some may be inside the sunken boat.

The National Transportation Safety Board arrived Tuesday to begin investigating the cause of the blaze, which left only five known survivors — the captain and four crewmembers who were on deck.