MADISON, Wis. (AP) — Milwaukee plans to install more than a dozen secure drop boxes to make it easier for voters to drop off their absentee ballots before Election Day to combat a “full-scale attack on voting by mail,” Mayor Tom Barrett told Wisconsin Democrats on Tuesday.

Barrett spoke to around 90 Democratic activists, office holders and others in conjunction with the second day of the Democratic National Convention. He described drop boxes as one way to fight back in battleground Wisconsin against President Donald Trump’s opposition to mail-in voting.

“As hard as the president is working to make it less appealing for people to use absentee balloting, we are doing everything we can to be make it convenient for people because of the health reasons, because of COVID-19, because it’s the right thing to do,” Barrett said.

Trump has acknowledged that he doesn’t want to provide the U.S. Postal Service with extra money, a move that would undercut its ability to process what is expected to be a record number of mail-in ballots this fall. At the same time, his reelection campaign has legally challenged various aspects of mail-in voting in Wisconsin and other states that could help decide the election. 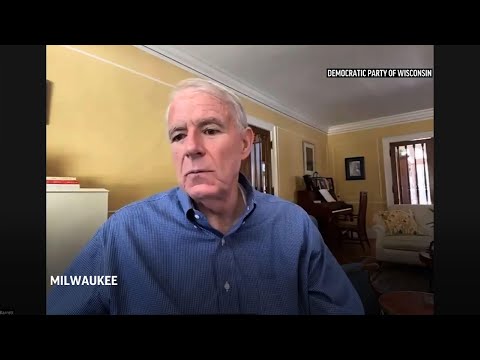 Trump won Wisconsin by fewer than 23,000 votes in 2016, and both sides are anticipating a close election again this November. Three of the past five presidential elections in swing state Wisconsin have been decided by less than a percentage point.

Postmaster General Louis DeJoy, a major Trump donor, announced Tuesday that he would suspend a number of initiatives that have drawn criticism from Democrats, including removing the distinctive blue mail boxes, until after the election. He’s set to testify before the Senate’s homeland security committee on Friday and the House Oversight Committee next week.

U.S. Sen Ron Johnson, an Oshkosh Republican who chairs the homeland security panel, told reporters during a conference call Tuesday that the postal system has “been a mess for years” and changes were underway before DeJoy took over. He said he wants to talk to DeJoy before he goes through a “show trial” in the Democratic-controlled House.

“This is being blown way out of proportion,” he said. “I hope to point that out on Friday and really debunk all this.”

Absentee voting, long an option for Wisconsin voters, is getting more scrutiny nationwide now given its skyrocketing popularity during the coronavirus pandemic. In Wisconsin’s 2016 and 2018 elections, about 6% of voters cast ballots absentee. In the April presidential primary, 62% of the votes cast were absentee by mail. More than 615,000 absentee ballots were cast in last week’s statewide primary election, but an overall percentage of the votes cast was not yet known. About 3 million votes are expected in the presidential race in November, meaning about 2 million, or even more, could be cast absentee.

In Wisconsin, absentee ballots will be mailed in mid-September and must be received by local election officials either by mail or in person by 8 p.m. on Election Day. Democrats and their allies filed a federal lawsuit that would extend the deadline for clerks to receive absentee ballots to within 10 days of the election. That case, opposed by Republicans, is pending.

In addition to being returned by mail, voters can also drop off their absentee ballots at most polling places on Election Day. However, there are 35 municipalities across Wisconsin, including Milwaukee, where ballots can’t be dropped off at the polls and instead must go to one or more central counting locations. That has raised concerns among election officials about confusion among voters who try to drop off their ballot at the polls on Nov. 3.

Installing drop boxes as Milwaukee is doing is one way to address that concern, said Wisconsin Elections Commission spokesman Reid Magney. It’s also a way to alleviate growing fears that a mailed ballot may not be received in time, he said. The Elections Commission does not have a count on how many of the state’s 1,850 municipalities are offering drop boxes, Magney said.

Wausau recently added one, and Madison has been using drop boxes. Milwaukee is paying for 14 to 15 drop boxes by tapping part of a $2.1 million grant it received from the nonprofit Center for Tech and Civic Life. Another $4.2 million went to Wisconsin’s next four largest cities -- Madison, Green Bay, Racine and Kenosha -- to help administer the fall election safely, including purchasing personal protective equipment and making other changes.

Barrett, noting the challenges posed by voting absentee, said one outcome of the Democratic National Convention should be the development of tutorials that activists can use to help train others in how to correctly complete an absentee ballot and return it.

“I love the speeches, I love the pageantry, but I know there’s a lot of work to be done and that’s what we’re doing in Milwaukee and the other cities in the state of Wisconsin,” Barrett said.