DEERPARK, N.Y. (AP) — Falun Gong practitioners found a peaceful refuge in the forested hills of upstate New York after their group was banned in China. Over the years, they built up a compound with a traditional Chinese temple, schools, and rehearsal space for their high-flying, globe-trotting dance troupe, Shen Yun.

But the steady growth of Falun Gong’s Dragon Springs complex has caused a rift with their neighbors, who worry about its effect on the area’s environment and rural character. A new proposal that could add more people, more buildings and more visitors has only added to the tension.

“We enjoy peace and quiet — until Dragon Springs moved in,” neighbor Dusanka Marusic said at a packed public hearing on the proposal this month. “We are either unwilling or unable to control what goes on there, and it jeopardizes everyone.”

Practitioners of Falun Gong, also called Falun Dafa, say they just want to coexist peacefully. But members in the past have said they were discriminated against by town officials based on their race and beliefs, which include traditional Chinese calisthenics and philosophy drawn from Buddhism, Taoism and the often-unorthodox teachings of founder Li Hongzhi. 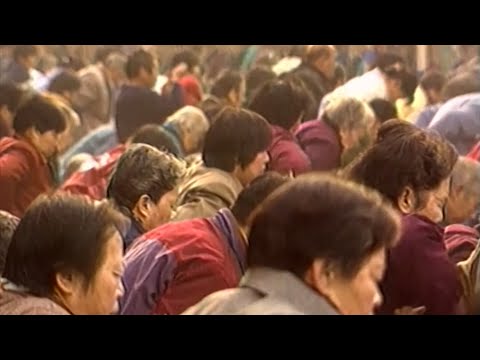 Dragon Springs sits on 400 acres about an hour’s drive northwest of New York City. The tax-exempt religious site was acquired in 2000, just a year after the Chinese government officially banned Falun Gong. China says it is an evil cult.

Practitioners have long said that the cult label is propaganda and that they have been politically persecuted in China.

After years of additions, the lakeside site features Tang Dynasty-style buildings along with modern, boxy buildings that would fit into a contemporary office park. Dragon Springs said 100 people, mostly students, live there. Few others get to set foot on the property, which sits deep in the woods behind guarded gates.

Now they’re asking for an expansion that would include a 920-seat music hall that, along with other public areas on the site, could generate up to 2,000 visitors a day, according to environmental impact filings. They’re also seeking a new parking garage, a wastewater treatment plant, and conversion of a meditation hall to a residence hall. Under the proposal, the entire site would be able to accommodate 500 residents.

But critics say the problem is that Dragon Springs has flouted environmental and land-use regulations for years, sometimes building first and asking permission later. And they say it has grown far beyond what was initially described as a modest refuge.

“It’s like a small city — little by little, through segmentation with one plan and then another plan,” said Grace Woodard, a Dragon Springs neighbor.

Dragon Springs president Jonathon Lee emphasized his group is considerate to its neighbors, noting that the setting for the group’s compound, nestled amid mountains and lakes, holds great cultural significance, especially for Buddhist reflection.

Lee answered questions emailed to his lawyer by The Associated Press. Lawyers did not answer a question about Dragon Springs’ revenues.

Shen Yun, which has five troupes of dancers, rehearses at Dragon Springs when it isn’t playing heavily promoted performances in some of the top venues in London, New York, Los Angeles, Washington and San Francisco, to name a few.

Their shows feature elaborate dance numbers against colorful backdrops of traditional China, with dozens of performers doing acrobatic leaps in flowing traditional garb. Some attendees have reported the shows include pro-Falun Gong and anti-communist messages. The Chinese embassy’s website calls the performances “a tool of the cult and anti-China propaganda.”

The compound site hosts an arts college that acts as a feeder for Shen Yun and a secondary school. Beyond Dragon Springs, more Falun Gong practitioners live in homes in Deerpark and surrounding towns. On warm days, practitioners can occasionally be seen doing their slow, fluid exercises together outdoors.

“Individually they are very nice, always been friendly,” said neighbor Bob Majcher. “What they do behind their walls is another story.”

The Delaware Riverkeeper Network wrote that the proposed development, including the wastewater plant and elimination of wetlands, could be “devastating” to the local stream, the Basher Kill and the trout-rich Neversink River.

The town’s planning board will accept written comments from the public on the expansion plans until May 8. Town officials could reach a decision in the coming months.

Dragon Springs has had its own complaints over the years.

The group claimed in a 2013 federal lawsuit that town officials were handling its planning approvals in a way that violated its religious rights. Members of the group claimed they were patronized by officials as “these people” and “Moonies,” according to court filings. The lawsuit was settled. A separate suit, filed in 2015 by 10 Chinese-American Dragon Springs residents who claimed the town supervisor was improperly challenging their right to vote, was later withdrawn.

“People just don’t truly understand Falun Dafa, Dragon Springs,” said Gail Rachlin, an area resident and spokeswoman for Falun Gong. “And if they did, if they had a better awareness, I think they would welcome and embrace us.”