TITUSVILLE, Fla. (AP) — For many spectators who filled parks, beaches and roads along Florida’s Space Coast, the launch of two astronauts into orbit Saturday was a welcome accomplishment and a reprieve from the coronavirus pandemic, economic worries and now unrest in the streets.

“With everything that’s going on in this country right now, it’s important that we do things extraordinary in life,” said Neil Wight, a machinist from Buffalo who drove from upstate New York to watch the launch. “We’ve been bombarded with doom and gloom for the last six, eight weeks, whatever it is, and this is awesome.”

Dressed in a white astronaut costume, helmet included, Tampa lawyer Tim Engelbrecht marveled at the sight of the rocket lifting off 15 miles away, from a park in Titusville where he watched with his wife and children.

“It’s nice to come out here and have everybody of every stripe, every interest and every opinion come together for something we can all believe in and get behind,” Engelbrecht said. “To see mankind and humankind take the next step is really kind of encouraging, especially in these tough times.”

Doug Marshburn of Deltona, Florida, shouted out, “USA. USA. We’re back in the race,” as the SpaceX rocket lifted through clouds above Kennedy Space Center. 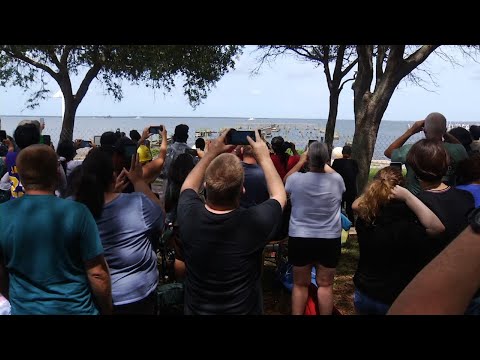 Around him, spectators screamed, whistled and clapped after shouting out the countdown from the 10-second mark. They lifted cameras and cellphones in the air to record the moment.

“I’m very proud of the United States. We are back in the game. It’s very satisfying,” Marshburn said.

Saturday’s launch was the first of NASA astronauts from Florida since 2011, when the space shuttle program ended, and the first by a private company. Since then, Americans have flown on Russian rockets, the only way to and from the International Space Station.

Many spectators had been there just days earlier on Wednesday for the first launch attempt, which was scrubbed due to the weather.

Because of the pandemic, NASA had tried to discourage people from coming for the launch of astronauts Doug Hurley and Bob Behnken and had drastically limited employees and visitors inside Kennedy Space Center.

At Space View Park in Titusville, few spectators wore masks and there wasn’t much social distancing. Instead, there was tailgating, lines for the Italian ice truck and a pizza worker who sold dozens of pizzas from an SUV.

After Wednesday’s scrub, Sarah Bryant, along with her sister, Jen Bryant, and four children between them, decided to rent a RV so they could drive from outside Houston to Florida for the launch. They were on the road for 20 hours, and dealt with a blown tire and a checkpoint at the Florida state line meant to ward off people with coronavirus, before arriving early Saturday.

Sarah Bryant’s 14-year-old son, Brooks, is obsessed with space, and had written out a checklist of all the steps in the launch process.

“We just decided to come and within 24 hours we were on the road,” said Jen Bryant.

Omar Francis, who works at NASA’s Johnson Space Center on the space station program, had driven from Houston with his wife, Charlene, and preschool-aged boys, Miles and Carter, to be at Wednesday″s attempt. They came back Saturday and were rewarded by watching the rocket stream through the air.

“For so long, yes, we hear the astronauts are going to space, but you don’t see them leave or come from here,” Francis said. “Now look at all the people who are here seeing astronauts leave from U.S. soil.”