LOS ANGELES (AP) — A wildfire swept through the star-studded hills of Los Angeles on Monday, destroying several large homes and forcing LeBron James and thousands of others to flee. Meanwhile, a blaze in Northern California wine country exploded in size.

The flames that roared up a steep hillside near the J. Paul Getty Museum in Los Angeles’ Brentwood section illustrated the danger the state faces as high winds batter both ends of California and threaten to turn any spark into a devastating inferno.

At least eight homes were destroyed and six damaged in the LA-area blaze, fire officials said.

No deaths from either blaze were reported, but a firefighter was seriously injured in the blaze in Sonoma County wine country. Authorities later said he was in stable condition.

Some 2.2 million people lacked electricity after California’s biggest utility, Pacific Gas & Electric, shut it off over the weekend in the northern part of the state to prevent its equipment from sparking blazes during windy weather. More deliberate blackouts are possible in the coming days because another round of strong winds is expected.

The company, which was driven into bankruptcy after its equipment ignited several deadly wildfires in recent years, admitted Monday that despite the outages, its power lines may have started two smaller fires over the weekend in the San Francisco Bay Area. 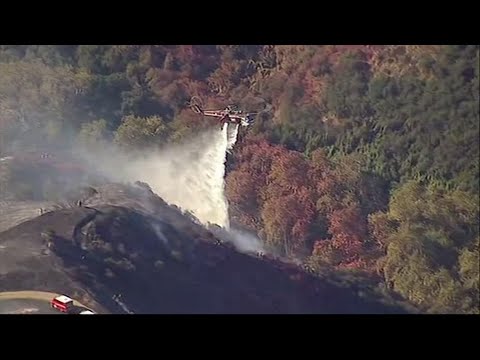 PG&E also has said its transmission lines may have been responsible for the Sonoma County fire.

That blaze, which broke out last week amid the vineyards and wineries north of San Francisco, grew to at least 116 square miles (300 square kilometers), destroying 123 buildings including 57 homes, damaging another dozen homes and threatening 90,000 more structures, authorities said.

The flames didn’t discriminate. In wine country, farmworkers who toil in the vineyards were among those displaced. In Los Angeles, James and former Gov. Arnold Schwarzenegger were driven from their homes.

“Man these LA (fires) are no joke,” the Los Angeles Lakers star tweeted, using an emoji for the word “fires.” ″Crazy night.”

Others who own homes in the evacuation zone include Sen. Kamala Harris, a Democrat running for president, who was not home at the time; Walt Disney Co. CEO Bob Iger; and rapper and producer Dr. Dre.

Anxious residents made their way down steep hillsides in the middle of the night in Range Rovers, Teslas and Maseratis. They left behind homes decorated for Halloween — skeletons hanging from homes, goblins sitting on front steps, cobwebs draped over bushes — as a plume of smoke glowed like a giant pumpkin.

David Boyle, 78, awoke at 3 a.m. to his doorbell ringing and police officers pounding on the front door. They warned him the wildfire was advancing toward his house near the Getty complex.

He grabbed dog food and his wife’s jewelry and hustled his dogs out the door. They went to a recreation center.

“It’s a fact of life when you live in this area,” he said. “Every place has some problem with disasters. People talk about earthquakes here, but I don’t think it’s as bad as hurricane season.”

Tens of thousands of people were ordered to clear out as the fire spread to more than 600 acres and burned at least five homes, authorities said.

The evacuation area extended west into Pacific Palisades, encompassing some of the most exclusive real estate in California, where celebrities and wealthy professionals live in estates nestled in canyons or on ridgetop retreats that cost tens of millions of dollars but are surrounded by tinder-dry vegetation.

Hours after homes had burned, some of the 1,000-plus firefighters battling the flames were hosing down smoldering ruins. Others attacked flare-ups in the brush-covered wilderness around neighborhoods.

Helicopters beat the air, and the buzz of chain saws echoed from the canyons. Hills were charred black, and in some places, white ash was all that remained.

The fire shut down southbound lanes of Interstate 405, a major commuting corridor and the route to Los Angeles International Airport from the San Fernando Valley.

The Getty, with its collection of priceless art, was not threatened, fire officials said. The museum gave assurances that its artworks are protected by state-of-the-art technology.

But Mount St. Mary’s University evacuated 450 students from its nearby campus. And the University of California, Los Angeles, canceled classes — not because of any direct threat from the flames but because of disruptions caused by the fire.

Similarly in Northern California, some 40 school districts in Sonoma County canceled classes, as did the University of California, Berkeley, which had no power because of the outages.

With no rain and more wind in the forecast, the coming days could be grim.

“This is when we have the most potential for large and damaging fires,” said Thom Porter, chief of the California Department of Forestry and Fire Protection. “All of California is in play right now.”

Gov. Gavin Newsom declared a state of emergency over the weekend.

The biggest evacuation was in Sonoma County, where some people who packed up and fled had done so two years ago, when devastating wildfires swept through the region, killing 44 people.

At an evacuation center at Napa Valley College, 15-year-old Francisco Alvarado said he, two younger brothers and his parents decided to leave their Calistoga home ahead of evacuation orders. Two years ago, the family had to flee in the middle of the night.

“I’m pretty mad that we have to keep evacuating,” he said. “I just want to be home. I’m trying to leave here tomorrow. I want to sleep in my bed.”