WASHINGTON (AP) — John Paul Stevens moved left as the Supreme Court shifted to the right during his nearly 35 years as a justice.

That’s how the bow-tie wearing Republican from the Midwest emerged as the leader of the high court’s liberal wing and a strong proponent of abortion rights, consumer protection and limits on the death penalty.

Stevens, who died Tuesday at age 99 in Fort Lauderdale, Florida, served longer than all but two justices and was the second-oldest after Oliver Wendell Holmes in the court’s nearly 230 years.

He stepped down from the bench at age 90, but remained active in public life. He wrote books, spoke frequently in public and contributed lengthy pieces to The New York Review of Books.

Stevens liked to argue that his views remained more or less the same, while the court became more conservative during his tenure. “I don’t think of myself as a liberal at all,” Stevens told The New York Times in 2007. “I think as part of my general politics, I’m pretty darn conservative.”

But the justice began his Supreme Court years as a critic of affirmative action and a supporter of the death penalty. His views on both shifted substantially to the point that Stevens declared in 2008 that he believes the death penalty is unconstitutional. 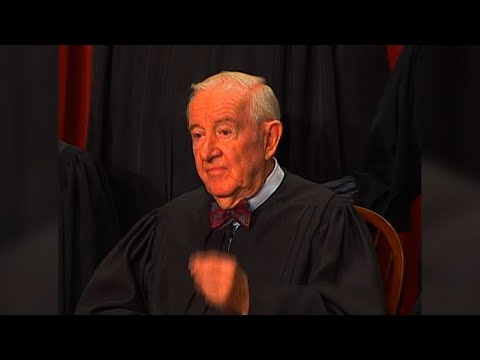 His legal reasoning was often described as unpredictable or idiosyncratic, especially in his early years on the court. He was a prolific writer of separate opinions laying out his own thinking, whether he agreed or disagreed with the majority’s ruling. Yet Stevens didn’t consider his methods novel.

He tended toward a case-by-case approach, avoided sweeping judicial philosophies, and stayed mindful of precedent.

“I was trying to apply the law in a sensible way,” he told USA Today after his retirement. “I pretty much always thought I had the right answer.”

He never shied from issuing a lone dissent, as he did a 2007 case about a high-speed police chase.

That case was notable for the justices’ ability to watch the chase on video from cameras mounted in police cruisers. What they saw scared them, and led to an 8-1 ruling that held officers blameless for the grievous injuries suffered by the driver of the car that was being pursued.

It didn’t scare Stevens, who said he learned to drive when most high-speed driving took place on two-lane roads, “when split-second judgments about the risk of passing a slow-poke in the face of oncoming traffic were routine.” Had his younger colleagues learned the same way, he said, “they might well have reacted to the videotape more dispassionately.”

The white-haired Stevens, eyes often twinkling behind owlish glasses, was the picture of old-fashioned geniality on the court and off. He took an unusually courteous tone with lawyers arguing their cases, but he was no pushover. After his fellow justices fired off questions, Stevens would politely weigh in. “May I ask a question?” he’d ask gently, then quickly slice to the weakest point of a lawyer’s argument.

Stevens was especially concerned with the plight of ordinary citizens up against the government or other powerful interests — a type of struggle he witnessed as a boy.

When he was 14, his father, owner of a grand but failing Chicago hotel, was wrongly convicted of embezzlement. Ernest Stevens was vindicated on appeal, but decades later his son would say the family’s ordeal taught him that justice can misfire.

More often, however, Stevens credited his sensitivity to abuses of power by police and prosecutors to what he learned while representing criminal defendants in pro bono cases as a young Chicago lawyer.

He voiced only one regret about his Supreme Court career: that he had supported reinstating the death penalty in 1976. More than three decades later, Stevens publicly declared his opposition to capital punishment, saying that years of bad court decisions had overlooked racial bias, favored prosecutors, and otherwise undermined his expectation that death sentences could be handed down fairly.

He wasn’t always a champion of the individual. A case allowing New London, Connecticut, to seize people’s homes for a redevelopment project was one of the most famous — and unpopular — majority opinions written by Stevens.

“Friends and acquaintances frequently told me that they could not understand how I could have authored such an opinion,” he said, while maintaining that the city’s actions were constitutional, even if unwise.

One of his harshest dissents came when the court lifted restrictions on spending by corporations and unions to sway elections. He called the 2010 ruling “a rejection of the common sense of the American people” and a threat to democracy.

As he read parts of that opinion aloud, Stevens’ voice wavered uncharacteristically and he repeatedly stumbled over words. For the 90-year-old who’d worried he wouldn’t know when to bow out, it was a signal. “That was the day I decided to resign,” Stevens said later. Justice Elena Kagan took his place.

The retirement of Stevens, known as a defender of strict separation of church and state, notably left the high court without a single Protestant member for the first time. “I guess I’m the last WASP,” he joked, saying the issue was irrelevant to the justices’ work.

A great-grandfather, he eased into an active retirement of writing and speaking, still fit for swimming and tennis in Fort Lauderdale, where he and his second wife, Maryan, kept another home away from Washington.

He is survived by two daughters, Elizabeth and Susan, who were with him when he died. Other survivors include nine grandchildren and 13 great-grandchildren. Stevens’ first wife, Elizabeth, second wife, Maryan, and two children died before him. Funeral arrangements are pending, the Supreme Court said in a statement announcing his death. But he is expected to be buried in Arlington National Cemetery, next to Maryan.

Born in Chicago on April 20, 1920, Stevens was a privileged child of a bygone era: He met Amelia Earhart and Charles Lindbergh at the family hotel and was at the ballpark when Babe Ruth hit his famous “called shot” home run in the 1932 World Series.

He joined the Navy the day before Pearl Harbor, and was awarded the Bronze Star for his service with a Japanese code-breaking team. The code breakers’ work enabled the U.S. to shoot down a plane carrying the commander of the Japanese Navy, and that targeted wartime killing later contributed to his misgivings about the death penalty.

After World War II, Stevens graduated first in his class at Northwestern University’s law school and clerked for Supreme Court Justice Wiley Rutledge. As a lawyer he became an antitrust expert, experience he brought to Supreme Court rulings such as one ending the NCAA’s control over televised college football games.

President Richard Nixon appointed Stevens, a lifelong Republican, to the federal appeals court in Chicago. Judge Stevens was considered a moderate conservative when Ford — whose nominee would need the approval of a Democratic-controlled Senate — chose him for the Supreme Court.

Stevens won unanimous confirmation after uneventful hearings nothing like today’s partisan shows. He once remarked that the contentious issue of abortion never came up during the hearings. At one point, as a witness began a statement critical of Stevens, the Judiciary Committee’s chairman, Mississippi Democrat James Eastland, invited the nominee into his office where they “shared a little bourbon” while the witness droned on in the hearing room, Stevens recalled.

Stevens’ liberal bent once on the high court was “different than I envisioned,” Ford acknowledged decades later, but he still supported and praised him as “a very good legal scholar.”

Stevens’ influence reached its height after other liberals retired in the early 1990s, leaving him the senior associate justice and the court’s leader on the left. For a dozen years after, he proved adept at drawing swing votes from Republican appointees Sandra Day O’Connor and Anthony Kennedy, often frustrating conservative Chief Justice William Rehnquist.

To sway O’Connor and Kennedy toward his views on issues such as abortion rights, he listened closely to their concerns and crafted narrow rulings to reflect their thinking. Other times, when he had built a tenuous majority, he used his status as the senior liberal to assign the writing of the opinion to the justice whose support seemed to be wavering, in hopes of solidifying his colleague’s reasoning.

Stevens’ clout diminished after Chief Justice John Roberts arrived in 2005 and O’Connor was replaced by the more conservative Samuel Alito.

But he didn’t lose spirit.

Throughout his career, Stevens unleashed some of his most memorable language in defeat.

He wrote a scathing dissent in Bush v. Gore, the 2000 case that ended Florida’s presidential recount and anointed George W. Bush: “Although we may never know with complete certainty the identity of the winner of this year’s presidential election, the identity of the loser is perfectly clear. It is the nation’s confidence in the judge as an impartial guardian of the rule of law.”

Relishing the wisdom of his years, Stevens liked to sprinkle his 21st century opinions with references to Prohibition or Tokyo Rose. He evoked stirring images of the D-Day assault on Omaha Beach in opposing the court’s ruling that flag-burning is a protected act of free speech.

Often sympathetic toward protesters, Stevens couldn’t countenance their abuse of the Stars and Stripes — perhaps because, to him, it stood for values he treasured most. The flag deserved protection, Stevens wrote, as “a symbol of freedom, of equal opportunity, of religious tolerance.”