EAST LANSING, Mich. (AP) — Dr. Samuel Stanley Jr., a medical researcher who has led Stony Brook University in New York for nearly a decade, was named Tuesday as the next president of Michigan State University in the wake of the most extensive sexual abuse scandal in sports history.

Stanley was chosen in an 8-0 vote by the school’s board of trustees, effective Aug. 1. He will take charge of a 50,000-student university that has been led by a string of acting or interim presidents since the January 2018 resignation of Lou Anna Simon, who quit amid fallout over former campus doctor Larry Nassar’s molestation of hundreds of female gymnasts and other athletes under the guise of treatment.

“Dr. Stanley is an empowering, compassionate and thoughtful leader, who will work tirelessly alongside our students, faculty, staff, alumni, trustees and broader Spartan community to meet the challenges we face together and build our future,” said board president Dianne Byrum, who co-chaired the presidential search committee.

Since 2009, the 65-year-old Stanley has been president of the 26,000-student Stony Brook on Long Island, a part of the State University of New York. He previously was vice chancellor for research at Washington University in St. Louis, where he first did a fellowship in infectious diseases and became a professor. He earned his medical degree from Harvard and completed a residency in Boston. 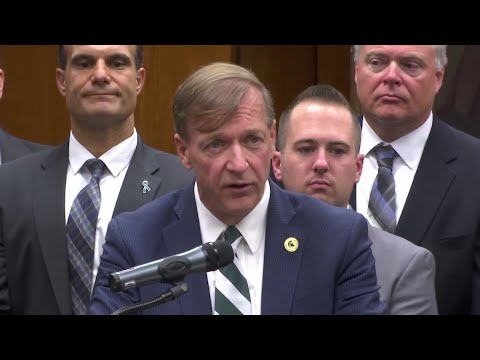 Stanley pledged to meet with Nassar’s victims and their families and, noting his background as a physician, said the “terrible tragedy” was a “gross and incomprehensible betrayal of trust.”

“What happened at MSU will not be forgotten,” he said. “Instead it will drive us every day to work together to build a campus culture of transparency, awareness, sensitivity, respect and prevention. A safe campus is going to be key to all of our initiatives.”

Stanley will be the fourth man to lead the school since Simon stepped down. She now faces charges of lying to police about what she knew during an investigation into a sex assault allegation against Nassar, who also worked at USA Gymnastics and treated Olympians. The university’s former gymnastics coach and dean of the osteopathic medicine school also have been charged criminally.

Following Simon’s departure, board vice president and secretary Bill Beekman briefly served as acting president before the February 2018 hiring of former Michigan Gov. John Engler as interim president. He helped to broker a $500 million settlement with victims but was ousted in January , however, amid backlash over his comments about some of Nassar’s victims. Since then, the school has been led by acting president Satish Udpa, a university administrator.

Trustee Melanie Foster, who co-chaired the 18-person search committee, said Stanley is a “proven leader with the energy, integrity and compassion needed to lead our university.”

The school noted that Stanley is one of two U.S. university presidents to be designated as an “impact champion” by the United Nations’ “HeForShe” campaign, for making gender equality an institutional priority. He will be the first president of Michigan State without ties to the school since John DiBiaggio, who served from 1985-1992, and the first without ties to the state since M. Cecil Mackey, who led the school from 1979-1985.

Stanley, who said he had accomplished many of the goals he set when arriving at Stony Brook, will make $800,000 a year over a five-year contract — a bump from Simon’s $750,000 salary. He will be eligible for an annual performance bonus of up to 20%, or $160,000. The school will contribute an additional $100,000 a year to deferred compensation.

Michigan State has drawn scrutiny for mishandling past complaints against Nassar — dating as far back as 1997 — that allowed his abuse to continue until 2016 and also for mismanaging the fallout, including by hiring Engler. Nassar pleaded guilty in 2017 to sexually assaulting nine victims and possessing child pornography, and his sentences equate life in prison.

“I’m so excited about the opportunity now to come to Michigan State University, this extraordinary university which has the scope and scale and impact to really change the world,” Stanley said. “I know there are challenges ahead. I’m very aware of those. But I’m very confident that we’re going to face it together.”

The search committee solicited feedback through 22 campus-wide input sessions and an online submission form, but candidates’ names — including Stanley’s — were kept non-public throughout the process. The approach drew criticism from the activist group #ReclaimMSU, which advocated for an open search.

“We’re still really disappointed with the process. If you were going to have a candidate who really was going to change the culture at MSU, it would have been the right thing for them to do say, ‘I want to meet with members of the community,’” said Anna Pegler-Gordon, a social relations and policy professor.