WASHINGTON (AP) — The Latest on President Donald Trump’s declaration of an emergency at the U.S.-Mexico border (all times local):

President Donald Trump has issued the first veto of his presidency, rejecting an effort by Congress to block the emergency declaration he had used to try to shake loose funds for his long-promised wall along the U.S.-Mexico border.

The monthslong confrontation now moves to the courts, but not before marking a new era of divided government and Republicans’ increasing independence from the White House.

Trump said Friday, “Congress has the freedom to pass this resolution, and I have the duty to veto it.”

A dozen defecting Republicans joined Senate Democrats in approving the joint resolution Thursday. It is unlikely that Congress will have the two-thirds majority required to override Trump’s veto.

Republican senators are exhibiting more willingness to stray from President Donald Trump. But those facing re-election next year are showing far more deference than the rest of their colleagues — and that suggests a worry that crossing him could be career-threatening.

When the Senate voted Thursday to block Trump’s declared southwest border emergency, 12 of the 53 GOP senators joined Democrats in voting against him. That’s a lot of defections for a president who normally has the backing of GOP lawmakers, a tribute to his overwhelming support among Republican voters. 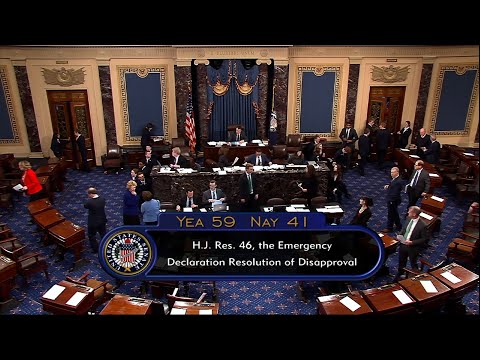 A closer look shows that of the 20 Republican senators facing re-election in 2020, just one voted against Trump’s emergency declaration: Maine Sen. Susan Collins.

House Speaker Nancy Pelosi says President Donald Trump’s veto of legislation blocking the national emergency he’s declared at the Mexican border shows he’s defying “the Constitution, the Congress and the will of the American people.”

The California Democrat says the House will vote March 26 on overriding Trump’s veto. The chamber seems certain to fall short of the two-thirds majority needed to succeed. That means his emergency declaration would survive, but it still faces several legal challenges.

Pelosi says GOP lawmakers must “choose between their partisan hypocrisy and their sacred oath to support and defend the Constitution.”

Anthony Romero, the ACLU’s executive director, says the courts will be the ultimate arbiter of the declaration’s legality.

The ACLU filed a lawsuit last month challenging the declaration on behalf of the Sierra Club and Southern Border Communities Coalition.

Public Citizen is another group that has taken legal action. Robert Weissman, the group’s president, says “the autocratic Donald Trump shows his true colors yet again.”

But Weissman says bipartisan rejection of the president’s declaration will make it harder for him to declare “future fake emergencies for nefarious ends.”

Trump wants to use the emergency order to divert billions of federal dollars earmarked for defense spending toward the southern border wall.

President Donald Trump has issued the first veto of his presidency, overruling Congress to protect his emergency declaration for border wall funding.

Flanked by law enforcement officials as well as the parents of children killed by people in the country illegally, Trump says “our immigration system is stretched beyond the breaking point” and calls the congressional action “dangerous” and “reckless.”

A dozen Republicans joined with Senate Democrats on Thursday to back the joint resolution disapproving of Trump’s emergency declaration. The House had passed the same resolution last month largely along party lines.

It is unlikely that Congress will have the two-thirds majority required to override Trump’s veto.

Trump wants to use the emergency order to redirect billions in federal dollars earmarked for defense spending toward the southern border wall. It still faces several legal challenges in federal court.

President Donald Trump says the United States is facing an invasion and that our immigration system is stretched beyond the breaking point as he prepares to veto a resolution that blocked his declaration of a national emergency on the southern border.

Trump says the nation’s immigration laws are dangerous for the country and have to change.

Trump is likely to prevail on his national emergency declaration. Overturning a veto requires a two-thirds majority vote in the House and Senate. But there doesn’t appear to be enough votes to override it.

President Donald Trump will sign the first veto of his presidency Friday, a day after Congress vote to terminate the national emergency Trump declared at the southern border. His declaration was an effort to circumvent Congress to secure more money for his proposed border wall.

White House spokesman Hogan Gidley says in an appearance on Fox News that the president will be signing the veto at 3:30 p.m. in the Oval Office. He says Trump will be joined with law enforcement as well as the parents of children killed by people in the country illegally.

Hogan is calling this “a sad moment and a very important moment” and says the vote against the president is also a vote “against the America people and their safety and security.”

Republicans joined Senate Democrats in blocking the order but there do not appear to be enough votes for an override.

President Donald Trump is poised to issue the first veto of his presidency after a dozen defecting Republicans joined Senate Democrats to block the national emergency he’d declared at the border. That declaration was an effort to circumvent Congress to secure more money for his southern border wall.

The bill was hand-delivered to the White House around 5:30 p.m. Thursday. And Trump made clear how he plans to respond, tweeting the word “VETO!” in all-caps moments after Thursday’s vote.

White House spokeswoman Mercedes Schlapp would not say when the veto would happen, but told reporters Friday Trump is “doing what he believes is his constitutional duty, which is to protect the American people.”

She also says the president “is incredibly disappointed” with Republicans who voted against him.

A dozen defecting Republicans joined Senate Democrats to block the national emergency that President Donald Trump declared so he could build his border wall with Mexico. The rejection capped a week of confrontation with the White House as both parties in Congress strained to exert their power in new ways.

The 59-41 tally Thursday, following the Senate’s vote a day earlier to end U.S. involvement in the war in Yemen, promised to force Trump into the first vetoes of his presidency. Trump had warned against both actions. Moments after Thursday’s vote, the president tweeted a single word of warning: “VETO!”

Two years into the Trump era, a defecting dozen Republicans, pushed along by Democrats, showed a willingness to take that political risk.