AUSTIN, Texas (AP) — Ken Starr, who zealously pursued charges against a sitting U.S. president in a White House sex scandal, was stripped of his job as president of Baylor University on Thursday after a scathing review found that under his leadership, the school did little to respond to accusations of sexual assault involving members of its vaunted football program.

The board of regents at the nation’s largest Baptist university said Starr will vacate the presidency on May 31 and stay on as chancellor and law school professor, jobs that will not include any “operational” duties for the school.

Baylor also fired football coach Art Briles and placed athletic director Ian McCaw on probation after an external investigation found the actions of football staff and athletics leadership “in some instances, posed a risk to campus safety and the integrity of the university.”

The report didn’t identify specific cases, but two football players have been convicted of sexual assault since 2014. In the past year, there have been multiple reports of other alleged assaults and women who said the school did nothing to help.

Starr gets to keep a title and a job, but his demotion at the school in Waco, Texas, is a stunning fall for the prosecutor whose dogged investigation of President Bill Clinton’s relationship with White House intern Monica Lewinsky eventually led to Clinton’s 1998 impeachment. 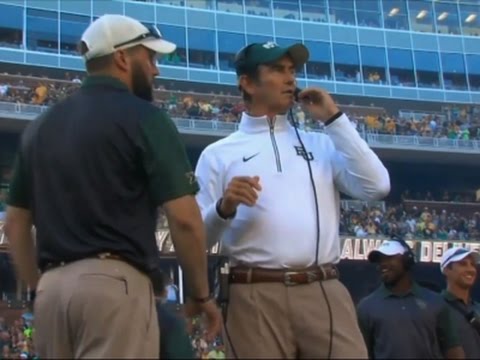 The review by Philadelphia-based law firm Pepper Hamilton found that under Starr, school administrators discouraged students from reporting or participating in student conduct reviews of sexual assault complaints and even contributed to or accommodated a “hostile” environment against the alleged victims.

In one case, the actions of administrators “constituted retaliation against a complainant for reporting sexual assault,” the report said.

University leadership was also slow to enact federally-required student conduct processes, and administrators failed to identify and eliminate the hostile environment toward victims, the report found.

In a statement to the Waco Tribune-Herald, Starr apologized to “those victims who were not treated with the care, concern, and support they deserve.”

He insisted he didn’t learn about the problems until fall 2015 and launched investigations as soon as he did.

“Despite these dark days, I remain resolved to join hands with the Baylor family to continue to build the University as we carry out its distinct mission in Christian higher education. May God grant us grace, mercy, and peace,” Starr said.

Once a losing program, Baylor football enjoyed unprecedented success under Briles, including two Big 12 championships in the last three years. Starr, who arrived at the school in 2010, went along for the ride and often ran onto the field with students during pregame ceremonies.

Football victories brought a financial windfall. In 2014, Baylor opened a new, $250-million on-campus football stadium and Starr became one of the leading voices among the presidents in the Big 12.

The 13-page “findings of fact” released by Baylor didn’t name Starr, Briles or McCaw individually, but the investigation covered from 2011-2015. Briles has been Baylor’s football coach since 2008 and McCaw became athletic director in 2003.

None of those three immediately responded to requests for comment.

Jasmin Hernandez, a former Baylor student who testified in football player Tevin Elliott’s 2014 rape trial, has filed a federal lawsuit against the school. She said Thursday the Pepper Hamilton report appears “honest and forthright” and shows the systemic way students who complained of sexual assault were denied their rights.

While The Associated Press generally doesn’t identify sexual assault victims, Hernandez has spoken publicly to draw attention to the case.

Hernandez agreed with Starr’s demotion but said “what concerns me more was the propagation of rape culture within Baylor University.”

University officials time and again had knowledge of assaults committed by football players and others but took no action, Hernandez said, adding she won’t drop her lawsuit.

It was Starr who initiated the Pepper Hamilton review that would lead to his downfall, ordering it last year after former football player Sam Ukwuachu was convicted of sexually assaulting a female soccer player.

Pepper Hamilton lawyer Gina Smith said the firm reviewed more than a million pages of documents, reports and interviews before presenting its findings to Baylor’s regents earlier this month.

While critical of top administrators for ignoring problems or being slow to act, the most critical elements were aimed at Briles’ football program.

The report found that football coaches and athletics administrators had run their own improper investigations into rape claims, and that in some cases, they chose not to report such allegations to an administrator outside of athletics.

By running their own “untrained” investigations and meeting directly with a complainant, football staff “improperly discredited” complainants’ claims and “denied them a right to a fair, impartial and informed investigation.”

The football program acted in ways that “reinforced an overall perception that football was above the rules,” the report said.