WASHINGTON (AP) — Republicans have decided it was OK.

With their expected vote this coming week to acquit President Donald Trump of abusing power and obstructing Congress, GOP senators are giving their express approval to the conduct that landed Trump at the center of the fourth impeachment case in American history. It’s the same message that House Republicans sent late last year with their unanimous votes against sending the case to trial.

It’s a fitting conclusion for a president who has spent three years testing the boundaries of his office and daring his own party to restrain him as his power and popularity within the GOP grew. It was already clear heading into the impeachment inquiry just how reluctant Republicans were to challenge Trump’s impulses. Coming out of the trial it’s uncertain whether there is anything he can do in office that would draw more than a passing, rhetorical rebuke from his party.

To Democrats, who initiated the impeachment process in hopes of pulling at least a handful of moderate or retiring GOP lawmakers to their side, Republicans are sending the message that, when it comes to Trump, nothing matters. His grip on the party is complete.

“No,” Rep. Hakeem Jeffries, one of the House Democratic impeachment managers, said in a retort to Republicans. “Lawlessness matters, abuse of power matters, corruption matters. The Constitution matters.” 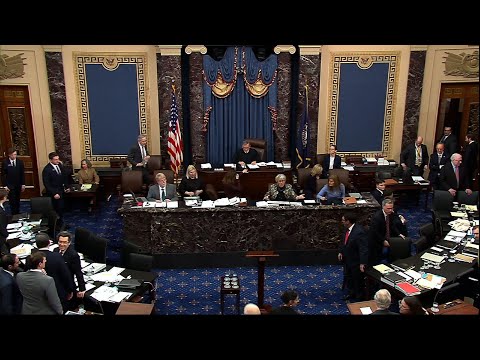 The reasons are clear for Republican lawmakers’ fealty to Trump. When he was a candidate in the 2016 primary, nearly all of them opposed him, often in terms as harsh as Democrats now use. Today, he inspires a loyalty borne of fear and retribution but also of the belief that Republicans’ own political fortunes are directly tied to his.

Though that brings with it risk in the November election, most vulnerable Republicans cannot succeed without him.

On the brink of the acquittal vote, some Republican senators insist that doesn’t mean they are simply giving Trump a pass. They argue there is more to consider in this moment than a yes or no question on whether Trump violated his oath of office by pushing Ukraine to investigate his Democratic opponents and blocking Congress’ ability to investigate the matter.

GOP Sen. Lamar Alexander of Tennessee, who is not seeking reelection, called Trump’s overtures to Ukraine “inappropriate” and thoroughly proved by House Democrats, but that Trump’s actions did not rise to the level of high crimes and misdemeanors. Sen. Marco Rubio, R-Fla., went so far as to suggest Trump’s actions may have indeed been impeachable, but Rubio argued that removing Trump from office was not the right remedy.

“Just because actions meet a standard of impeachment does not mean it is in the best interest of the country to remove a president from office,” Rubio said.

But behind the flickers of disapproval and the sober, carefully parsed statements, the all but certain acquittal vote Wednesday means Republicans are also accepting Trump’s behavior and establishing a precedent for the ways in which an American president can wield the power of the office for personal political gain.

Trump has long made clear that he sees few limits to his power. He saw vindication, not flashing warning lights, after special counsel Robert Mueller’s investigation into his possible obstruction of justice ended without any consequences. Shortly after that inquiry ended, Trump stated that the Constitution gives him “the right to do whatever I want as president.” Indeed, his phone call with Ukraine’s leader came just a day after Mueller testified before Congress.

At times during the impeachment case, Trump’s lawyers echoed those same arguments, most notably when retired Harvard law professor Alan Dershowitz said that if a president believes his personal interests are in the national interests, then his actions are not impeachable.

Though Dershowitz later tried to back away from the most expansive interpretations of his remarks, the crux of his argument remained: Trump wasn’t out of bounds in seeking a foreign government’s assistance for personal political gain, nor would he or a future president be if it happened again.

Democrats entered the impeachment process optimistic that this might be a moment that would weaken Trump’s hold on his party. They believed this investigation was different from those that preceded it, including Mueller’s, because it was rooted in Trump’s own words to Ukraine’s president and confirmed in a rough transcript made public by the president, who insisted the phone call was “perfect.”

As the impeachment case began, some Republican lawmakers expressed public concern over the president’s dealings with Ukraine; even more did so privately.

There were also moments that tested Republicans’ loyalty to Trump.

The release of text messages from administration officials as they struggled with Trump’s decision to involve his personal lawyer, Rudy Giuliani, in efforts to investigate former Vice President Joe Biden and the Democratic National Committee. The televised testimony of career public servants who raised grave concerns about Trump’s actions in real time. Then, last week’s revelation that former national security John Bolton will reveal in an upcoming book that the president told him directly that crucial military aid to Ukraine was being held up until Ukraine agreed to the investigations into Democrats.

But those moments of GOP anxiety proved to be fleeting. Time after time, Republicans found reasons to stand by the president.

Their reasons were many. The aid to Ukraine was ultimately released. There were real questions about a potential conflict of interest with Biden given his son’s work with a Ukrainian energy company. And in the ultimate chicken-or-egg argument, GOP senators said they couldn’t support conviction — or even a hearing for new witnesses — because the process had not been bipartisan.

“It seems like the die has been cast here,” Biden said Friday after a campaign event in Iowa. The only remedy that remains, he said, comes in November.

“I just have to beat him in the general election,” he said of Trump.

Trump will now campaign with the stain of impeachment on his record, but it’s unclear whether the case that has tied up Washington for four months will still be fresh in voters’ minds in November.

One thing that is certain is that Trump’s acquittal will be followed by new revelations related to the impeachment case. Among them: legal cases pending that relate to Giuliani’s work in Ukraine and documents that have yet to be made public.

Then there is the unpublished book from Bolton, who said he was willing to testify under oath if the Senate was willing to hear from new witnesses. Republicans rejected that chance on Friday.

EDITOR’S NOTE — Washington Bureau Chief Julie Pace has covered the White House and politics for The Associated Press since 2007. Follow her at http://twitter.com/jpaceDC