The Latest: Pelosi says ‘all roads seem to lead to Putin’

WASHINGTON (AP) — The Latest on President Donald Trump and the House impeachment inquiry (all times local):

House Speaker Nancy Pelosi says “all roads seem to lead to Putin” when it comes to President Donald Trump.

The California Democrat told reporters Tuesday that nevertheless, she’s not going to call for a formal House vote on impeachment.

Trump has said that without a vote, the ongoing impeachment inquiry is “illegitimate.” But Pelosi says “we’re not here to call bluffs” and “this is not a game to us.”

She adds that when it comes to Trump, “all roads seem to lead to” Russian President Vladimir Putin.

The House’s lead investigator, Intelligence Committee Chairman Adam Schiff, says the White House has ordered the Defense Department to not comply with a subpoena for documents. He says such moves mean “the case for obstruction of Congress continues to build.”

That’s according to people familiar with Speaker Nancy Pelosi’s message behind closed doors to her colleagues Tuesday.

Pelosi had gathered lawmakers for a closed session after House leaders surveyed rank-and-file members about it. 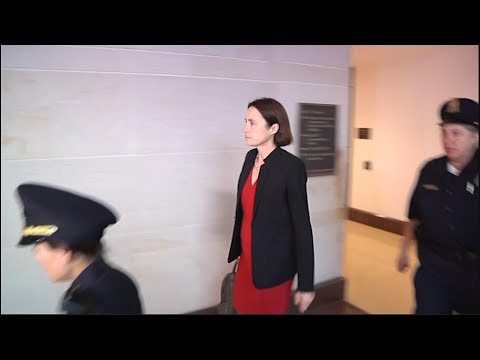 Trump calls the impeachment inquiry “illegitimate” and says the House needs to go on the record with a vote. Republicans want to put politically vulnerable Democrats in a tight position in areas where the president remains popular.

Pelosi counters that Congress is well within its authority to investigate as part of its oversight role. The Constitution gives the House impeachment powers but provides little guidance on the process.

Trump is being investigated over his effort to have Ukraine investigate political rival Joe Biden.

Vice President Mike Pence is refusing to comply with House Democrats’ request for a long list of documents as part of its impeachment inquiry.

The vice president’s counsel, Matthew E. Morgan, shared the news in a letter to the chairs of the investigating committees Tuesday evening. He’s echoing President Donald Trump’s lawyers’ complaints that the House has not held a formal vote on the investigation.

Morgan is slamming what he’s calling a “purported ‘impeachment inquiry,‘” claiming it “has been designed and implemented in a manner that calls into question” the members’ “commitment to fundamental fairness and due process rights.”

House Democrats are currently gauging support for a vote to formally authorize the impeachment inquiry in the face of White House stonewalling.

President Donald Trump’s personal lawyer Rudy Giuliani has notified lawmakers that he will not comply with a subpoena issued in the impeachment inquiry.

A letter sent by attorney Jon Sale says the subpoena is “overbroad, unduly burdensome, and seeks documents beyond the scope of legitimate inquiry.” Sale also echoes a letter from the White House counsel’s office in describing the impeachment inquiry itself as “unconstitutional” and “baseless.”

Democrats set a Wednesday deadline for Giuliani to provide documents.

Text messages and witness testimony have revealed Giuliani’s role in a backchannel effort to get Ukraine to investigate a gas company linked to the family of Democratic rival Joe Biden.

It was not immediately clear how House Democrats conducting the impeachment inquiry would respond to Giuliani’s refusal to comply.

The Kentucky Republican spoke as Congress returned from a two-week recess, during which House Democrats probed Trump’s pressure on Ukraine’s president to investigate Joe Biden’s family.

Opening the Senate, McConnell says House Speaker Nancy Pelosi had long planned to topple Trump even if it means breaking with tradition.

McConnell says Democrats “have no intention of letting norms precedents or basic due process stand in the way as they seek to cancel out a presidency.”

His remarks track with Republican complaints about the process Democrats are using to investigating Trump, which has included a series of closed-door depositions with current and former Trump administration officials.

House Democratic leaders are gauging support for holding a vote to formally authorize the impeachment inquiry against President Donald Trump.

That’s according to a knowledgeable Democrat who spoke to The Associated Press on condition of anonymity. The Democrat said leaders are doing a whip count and asking members how they would vote.

The House is already investigating Trump’s pressure on Ukraine’s president to investigate Joe Biden’s family. But the White House and Republicans have dismissed the probe as “illegitimate” because there has been no formal House vote to open impeachment proceedings. Trump’s allies are challenging Democrats who may be politically reluctant to put their names formally behind impeachment.

Many first-term Democrats from swing districts have recently come out in favor of Trump’s impeachment over the Ukraine call.

President Donald Trump’s personal lawyer Rudy Giuliani is acknowledging he earned $500,000 for work for a company run by a business associate who has been charged with federal campaign finance violations.

Giuliani says he received two payments totaling $500,000 related to the work for Lev Parnas’ company, Fraud Guarantee, which is based in Boca Raton, Florida.

Giuliani says he was hired to consult on Fraud Guarantee’s technologies and provide legal advice on regulatory issues, and that he is confident the money came from a “domestic source.”

Giuliani also is playing down the $500,000 total, saying he’s had larger contracts with other clients.

Parnas and an associate were arrested last week trying to board an international flight. The charges against them relate to a $325,000 donation to a group supporting Trump’s reelection.

The men had key roles in Giuliani’s efforts to launch a Ukrainian corruption investigation against Democratic presidential contender Joe Biden and his son Hunter.

The payments were first reported by Reuters.

A former White House adviser on Russia has told House impeachment investigators that she had strongly and repeatedly objected to the ouster of the U.S. ambassador to Ukraine, Marie Yovanovitch.

A person familiar with Monday’s behind-closed-doors testimony of Fiona Hill described her testimony to The Associated Press.

Yovanovitch herself testified last week that President Donald Trump pressured the State Department to fire her.

Hill testified for more than 10 hours Monday in the Democratic inquiry. At issue are Trump’s pleas to Ukrainian officials for investigations into political rival Joe Biden’s family and into the country’s involvement in the 2016 presidential election.

Five more private interviews are scheduled this week, mostly with State Department officials, though it’s unclear if all will appear after Trump declared he wouldn’t cooperate with the probe.