Boys school shuts down amid fallout over Washington videos

COVINGTON, Ky. (AP) — A Kentucky boys’ school shut down its campus Tuesday as a precaution and a small protest was held outside their diocese as fallout continued over an encounter involving white teenagers, Native American marchers and a black religious sect outside the Lincoln Memorial last week.

President Donald Trump tweeted early Tuesday that the students at Covington Catholic High School “have become symbols of Fake News and how evil it can be” but he hopes the teens will use the attention for good, and “maybe even to bring people together.”

The recorded images that initially generated outrage on social media were tightly focused on the students wearing “Make America Great Again” hats, who seemed to laugh derisively as they surrounded an elderly Native American beating a drum.

“We’ve reached out and voiced our support,” Sanders said. She added that no one understands better than Trump when the media jumps to conclusions and “attacks you for something you may or may not have done.” And if the president does invite the students from Covington Catholic High School to the White House, Sanders said, it will be sometime after the shutdown has concluded. 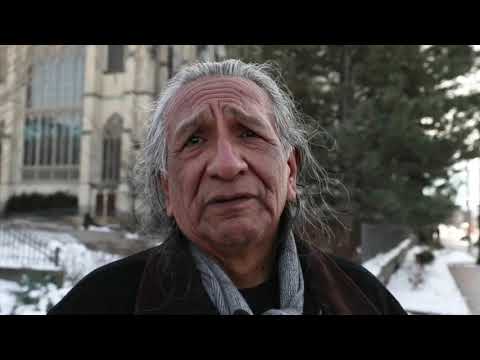 Longer videos from wider perspectives emerged later over the Martin Luther King holiday weekend. They revealed the drummer — Omaha Nation elder Nathan Phillips — had intervened between the boys and the religious sect. That came after the teens seemed to grow rowdier and the black street preacher who had been shouting racist statements against both groups escalated his rhetoric.

Soon, all sides were pointing fingers , giving their own accounts about feeling victimized and misunderstood.

“We just don’t know what the volatility of the situation is with these people that react and they don’t know the full story. And it’s very scary,” Jill Hamlin of Cincinnati, a chaperone for the boys as they attended an anti-abortion rally, told FOX News on Tuesday morning.

The Roman Catholic Diocese of Covington said in a statement late Tuesday that local police alerted them a protest was planned. It said officials were advised to close school “due to threats of violence and the possibility of large crowds” adding they would reopen school when police “say it is safe to do so.”

The diocese, which previously criticized the students’ behavior, promised to begin its investigation of events this week.

“This is a very serious matter that has already permanently altered the lives of many people. It is important for us to gather the facts that will allow us to determine what corrective actions, if any, are appropriate.”

The school and the diocese websites were taken offline.

The American Indian Movement Chapter of Indiana and Kentucky held a small protest outside the diocese office, with activists outnumbered by the media.

Albert Running Wolf, a Native American from Fort Thomas, Kentucky, referred to Nathan Phillips during the event as “an honorable man” who was trying to be a peacemaker, but ended up being verbally attacked. He said Phillips deserves an apology.

“It doesn’t matter what color they were, what political factions they were. It was disrespect— straightforward.”

Protesters ended the rally on a street corner near the diocese by singing a song from the American Indian Movement while two Native Americans beat drums.

Kathleen Seither of Cold Spring, Kentucky, said she attended the rally in support of Native Americans, appalled by the students’ behavior.

“They have embarrassed their school, their city, their parents, their state, their country.” Seither said their actions are an example of “white male privilege, a product of everything in today’s world including the president.”

A smaller group supporting the teens converged closer to the diocese building.

Among them was Cincinnati resident Maureen Green, a former Catholic and mother of three whose sign read: “I stand with the boys. Facts not fiction.” She said she thought the boys had been mispresented and “railroaded” by some media accounts.

“I think these boys are learning a lot about how the world really works. It’s a life lesson,” she said.

Phillips, for his part, offered to visit the boys’ campus for a dialogue on cultural appropriation, racism and the importance of listening to and respecting diverse cultures.

“Let’s create space for the teaching of tolerance to happen,” his statement said, according to The Cincinnati Enquirer. “I have faith that human beings can use a moment like this to find a way to gain understanding from one another.”

Twitter, meanwhile, has suspended an account that helped the video go viral. Twitter prohibits the creation of “fake and misleading accounts,” and the encounter once again demonstrated the power of social media to not just amplify but manipulate narratives, aided by bots and malicious actors out to shape public discourse.