San Francisco statue that some call racist is removed

SAN FRANCISCO (AP) — A 19th century statue near San Francisco’s City Hall that some said is racist and demeaning to indigenous people was removed early Friday.

A group of Native Americans chanted, beat drums and burned sage as the workers used a crane to take down the “Early Days” statue depicting a Native American at the feet of a Spanish cowboy and a Catholic missionary. It was part of group of bronze statues near City Hall that depict the founding of California.

Native American activists tried to have the statue removed for decades. They renewed efforts last year after clashes broke out across the U.S. over Confederate monuments.

Cities nationwide have tried to remove Confederate monuments following the racially motivated massacre of nine people at a black church in South Carolina and a violent white supremacist rally in Charlottesville, Virginia.

The San Francisco Board of Appeals voted unanimously Wednesday for the removal of the statue, which was part of the Pioneer Monument first erected in 1894.

While American Indians have pushed for the statue’s removal for decades, it has not attracted the same furor as Confederate monuments elsewhere. In a 1996 compromise, a plaque was installed underneath the sculpture explaining that the monument “represents a conventional attitude of the 19th century.” 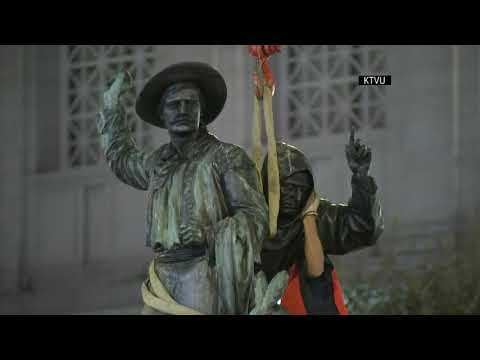 “I think we’re witnessing a moment in history where, commendably, San Francisco officials are doing the right thing to help rectify the mistreatment of indigenous people,” Janeen Antoine, who is of Lakota heritage, told the San Francisco Chronicle. “We’re very happy this is finally happening after decades of work and struggle from the native community.”

The statue will be restored and put in storage until officials decide what to do with it, said San Francisco’s Arts Commission spokeswoman Kate Patterson.

The cost of removing the sculpture, which required a sculpture conservation specialist and a crane, fully restoring it and paying for storage will be $120,000, Patterson said.

Several entities including a California museum have expressed interest in displaying it, but Patterson said she couldn’t discuss who they are because the commission is not yet considering the sculpture’s next home.

“Our priority is to restore it,” Patterson said. “We’re not entertaining the offers at this moment so, I won’t discuss that right now.”