4 dead, several injured across South in outbreak of twisters

ALEXANDRIA, La. (AP) — A swarm of tornadoes and other storms that left a trail of destruction across the Southeast killed four people, injured at least a dozen more and left victims to bundle up against the cold as they picked through pieces of their homes on Tuesday.

The death toll rose to four after heavy overnight rains caused flooding in Greenup County, Kentucky. Water rescue crews were called in about 8 a.m. Tuesday to aid two people, and at least one of them died, Kentucky State Police Trooper Bobby King said. He said crews were still trying to rescue another person.

National Weather Service teams confirmed at least 18 tornado paths: nine in Mississippi, six in Alabama and three in Louisiana. The number could rise since teams were still surveying damage.

Col. Bryan Olier, chief of staff at the Mississippi Emergency Management Agency, told a news conference that at least 25 counties were affected, 150 homes reported damaged or destroyed and about a dozen people injured. 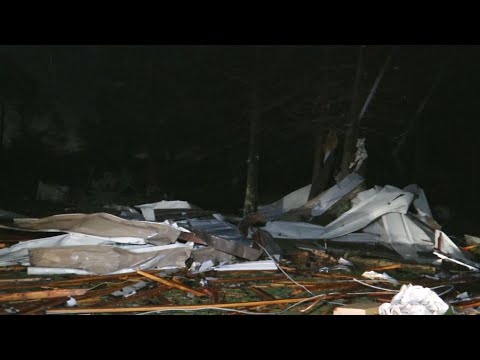 “The cat flew,” said Tonia Tyler of Pineville, Louisiana. “It picked the cat up, and the cat flew — my cat — it flew across the yard. And I knew right there, I said ‘Oh God, we’re not going to make it.’”

The toll could have been worse.

Workers at Hope Baptist Christian Academy in Alexandria got children under pews in the church sanctuary before a twister ripped the roof off the building, said Gov. John Bel Edwards. A worker clung to a beam in a maintenance barn to avoid being hurled into the storm.

“I’m just thankful that we’re looking at buildings and cars and travel trailers and mobile homes that have been destroyed here and not lives,” Edwards said during a news conference in Alexandria. He said about 100 homes were damaged, about half of them either very severely damaged or “practically destroyed.”

Overnight lows Tuesday were predicted to dip below freezing, putting pressure on utility crews to restore power to more than 15,000 homes and businesses left in the dark in the region.

Some houses were destroyed and others severely damaged, he said, with damage spread across the county on the southeast Louisiana state line.

In Guntown, Mississippi, near Tupelo and about 260 miles (420 kilometers) north-northeast of Amite County, a tornado destroyed a church and damaged dozens of homes.

Brad Poyner and his son rode out that twister in a bedroom closet. “You heard like a cannon going off in your ears and then we walked out and it was calm,” Poynor told the Daily Journal.

However, the tornado — assessed by the National Weather Service as an EF2 twister with 115-mph (185-kph) winds — had ripped off the roof over Poyner’s living room. Soggy pink insulation and drywall covered the floor Tuesday.

It was among at least 60 to 75 homes damaged in Lee County, with assessments still going on, officials said.