NEW YORK (AP) — The next time you find yourself in a courtroom, look around. There’s a chance you might spot Lucy Lawless there, too.

The actress is fascinated by trials and on days when she’s not working will often go to court as a member of the public. There you’ll find the onetime “Xena: Warrior Princess” trying to look inconspicuous, soaking it all in.

“It just teaches you so much about life and your own society and justice and about yourself,” says Lawless. “It’s really important that we participate in the democracy. That’s a really good way to hold the justice system to the standards of the people.”

Lawless, 51, has attended a murder trial in her native New Zealand, jury selection for a grisly case in Louisiana and was even at Jeffrey Epstein’s bail hearing in New York last month when the financier faced sex trafficking charges.

On that rainy day, she showed up bedraggled in flip-flops and watched Epstein “shamble in,” acting shaky. The whole thing was over quickly. “Sedate is not the right word. It was somber. And methodical. And meticulous. And all over in 20 minutes,” she says.

Lawless’ fascination with crime — she even will go so far as calling herself a “court ghoul” — has filtered into her latest project, the new crime TV series “My Life is Murder,” which premieres on Acorn TV starting Aug. 5. “This much more closely mirrors my own personal interests,” she says. 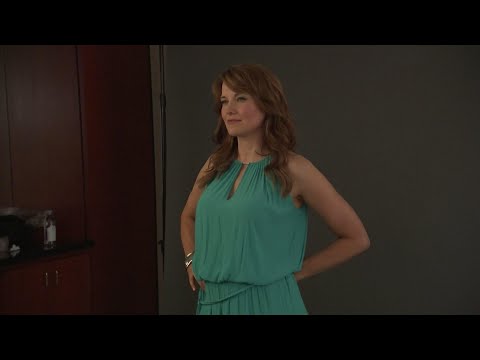 In a typical scene, a villain holding a knife orders Alexa to stand up. “Get up slow,” he snarls. She responds calmly: “I think you’ll find ‘slowly’ is the adverb.”

There are differences between Alexa and Lawless, of course. One is the character’s love of bread, which on the show is a symbol of new life and nurturing. In real life, Lawless is gluten intolerant.

“It’s kind of a joke that I’m always up to my elbows in flour. But I sure earned my intolerance. For 40 years, I ate bread like a mad thing and I know what it tastes like alright.”

“I just want to give people a little psychic holiday from all the grim stuff so they can recharge the batteries and go back out there and fight the good fight,” Lawless said.

Creator Claire Tonkin wrote Alexa with Lawless in mind. “There’s a lot of me in the character and that’s the advantage of having writers build something around you. I’m a very lucky woman,” says Lawless.

“We love Lucy Lawless. We love what she brings to the screen — her strength, her vivaciousness, her intelligence and her sense of humor. We think that ‘My Life is Murder’ is the perfect vehicle to showcase all of that,” he says.

Lawless’ strength and humor were present when she burst into the public’s consciousness as Xena in a show that mixed dark mythology, action, campy humor and sly sexuality. It aired from 1995 to 2001.

Xena was a she-hunky leather queen in a breastplate who battled bad guys with sword, shiv, crossbow, frying pan or the ultimate weapon, a murderous missile called the chakram. She and her sidekick, Gabrielle, were part of one of television’s more intriguing gal-pal duos, with many viewers celebrating what they saw as lesbian affection.

“It was fun. It was about universal themes, of the triumph of the human spirit: love, courage and, of course, hate and fear underneath that,” Lawless says. “The legacy is that it inspired, by some kind of alchemy, positive change in the lives of individuals.”

Lawless constantly hears from fans about how the show empowered them, especially from people who feel marginalized — minorities, invalids, and gay men and women. She once asked an African-American woman why it resonated with black women. That woman’s response: “African-American women feel that they need to be warrior woman every day of their lives.”

Lawless is something of a warrior off-screen, too. Activism is something she takes seriously and calls the environment “my No. 1 commitment.” She was arrested in 2012 for protesting Arctic oil drilling with Greenpeace and says the movement needs to keep going despite political setbacks.

“You get compassion fatigue. You go, ‘I’ve only got so much bandwidth, and this is making my heart hurt’ and the world’s really heart-hurty right now,” she said.

“So in order to keep us buoyant, we’ve got to start hearing about the great innovations and people who are doing good work and there’s tons of it out there.”

Mark Kennedy is at http://twitter.com/KennedyTwits