NEW YORK (AP) — For the first time, an audio recording is available of nearly everything heard onstage at Woodstock 50 years ago — from transcendent music to announcements about lost people and bad acid. It’s the entire Woodstock experience, minus the mud.

History aside, who would buy an exhaustive 38-disc package with 432 songs? Who would even take the time to listen?

More people than you might think. All 1,969 copies (get it?) of “Woodstock — Back to the Garden — The Definitive Anniversary Archive” were snapped up weeks ago. Abbreviated 10-, five- and three-disc packages remain on the market.

“I was always 100 percent certain that it was going to sell out,” said Andy Zax, the set’s producer. “I lobbied for them to produce some more copies ... I knew there was an audience for this.”

He said he’s already spotted copies available for resale online at nearly $2,000 and expects that price will keep rising.

The logistics of running a festival that drew 400,000 people and defined a generation may have overwhelmed Woodstock organizers, but they did keep tape recorders running. It still took detective, technical and persuasive skills to recreate a start-to-finish document, in a way that couldn’t be done when Zax quarterbacked a six-disc retrospective for the 40th anniversary. Copies of performances were scattered, not everybody wanted all the music released and technology wasn’t up to the level of today.

Of the 432 tracks on the Rhino Records package, 267 had never been made public before.

The image of Woodstock that lives in many people’s minds was set by director Michael Wadleigh’s documentary and two soundtrack recordings released shortly after the festival. To Zax, presenting the entire concert busts and enhances some myths.

For one thing, he was able show Country Joe McDonald that he wasn’t the festival’s second act, as the singer had long been telling people. Instead, he performed on the second day.

Jimi Hendrix’s rendition of “The Star Spangled Banner” was an epic moment in the film. In reality, all but a few thousand people had gone home by the time Hendrix appeared.

Despite bigger names involved, the recording reveals that Sly & the Family Stone and the now-forgotten Canned Heat drew the biggest responses from the audience. Zax was blown away by Bert Sommer, but since his performance wasn’t included in Wadleigh’s film or earlier soundtracks, both that show and Sommer are historical asterisks.

“If even a fragment of it had made the film, he would be as famous as Richie Havens,” he said.

Creedence Clearwater Revival, one of the most popular acts at the time, had never before authorized release of their performance. The band was unhappy with it and angry that a meandering Grateful Dead left them with a non-responsive audience and a start time past midnight. The Dead “put half a million people to sleep,” singer John Fogerty told The Associated Press.

Fifty years later, the set is now available both on the Rhino box and a separate disc okayed by Fogerty. While the performance was “a blazing document of the band at its peak and should’ve helped cement the band’s legacy,” music critic Greg Kot of the Chicago Tribune recently wrote that it was a reminder of how Creedence undercut its career.

“Creedence was smoking, was on fire everywhere else,” Fogerty recalled. “Everything we were doing was really turning out well, and we were shooting up into the sky like a rocket. And I just thought, ‘why should we show the world this thing where we’re having difficulty, and not looking so good?’ I declined and never really looked back.”

Ravi Shankar was another artist unhappy with his rain-soaked performance and, like some others, later recreated it in a studio and passed it off as the “real” Woodstock show. Only a mono copy of the original survived. However, James Clarke of Abbey Road studios used a new mixing process to create a stereo recording.

Zax grimaces at how other producers have tried to “fix” recordings of Woodstock performances.

“When you try to clean it up, you make it worse. This is never going to sound like a Steely Dan record,” he said, referencing a band known for its fastidious recordings. “So why try?” 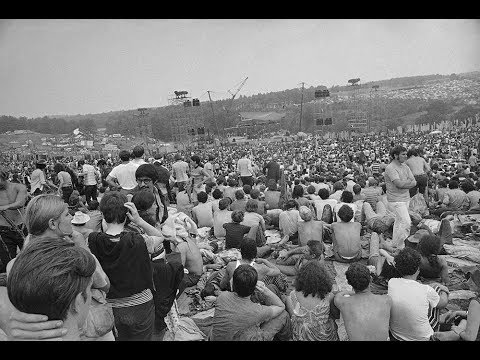 Fifty years ago, they were at Woodstock. In the past few weeks, they were at AP talking about what it all meant. This mini-doc features David Crosby, John Fogerty and Santana remembering the music festival that has defined music festivals ever since.

Still, he was not beneath using some studio wizardry to improve things, like when engineers fixed some wildly out-of-tune horns during the set of Blood, Sweat & Tears. That’s different, to him, than projects where instruments or voices were added or re-recorded.

Producers fell just short of recreating the entire festival, and don’t think that doesn’t drive Zax crazy. There was a tape gap during Sha Na Na’s performance — it came near the end of Woodstock and technicians got a little sloppy — and although he knows the act sang a cover of “Teenager in Love,” he’s never been able to locate a copy.

The Rhino box includes several other curios, including posters, a replica of the original program and a book written by Michael Lang, one of the original festival creators. The audio is being streamed this weekend on SiriusXM and a handful of radio stations, including Radio Woodstock in Woodstock, N.Y.

Most people who consider Woodstock now think of its cultural significance, or the blocked traffic and acres of people.

Zax hopes the box makes people remember the music. He’s spent countless hours listening to it and, if you’re wondering, he wasn’t there. He was 4 at the time and living in California.

“I would have loved to have been there,” he said. “Even if I was damp and mildewy and starving.”