CARACAS, Venezuela (AP) — All eyes were on Juan Guaido’s next step after the popular Venezuelan opposition leader declared he was temporarily assuming presidential powers in a high-stakes bid to unseat Nicolas Maduro, whose powerful loyalists went on the offensive Thursday in support of the embattled leader.

Guaido has disappeared from view since swearing before tens of thousands of cheering supporters to uphold the constitution and rid Venezuela of Maduro’s dictatorship, and his whereabouts remained shrouded in mystery.

In his first public comments since declaring himself interim president, and speaking from an undisclosed location, Guaido told Univision he would consider granting amnesty to Maduro and his allies if they helped return Venezuela to democracy.

A defiant Maduro called home all Venezuelan diplomats from the United States and closed its embassy, a day after ordering all U.S. diplomats out of the country by the weekend. Washington has refused to comply, but ordered its non-essential staff to leave the tumultuous country, citing security concerns. 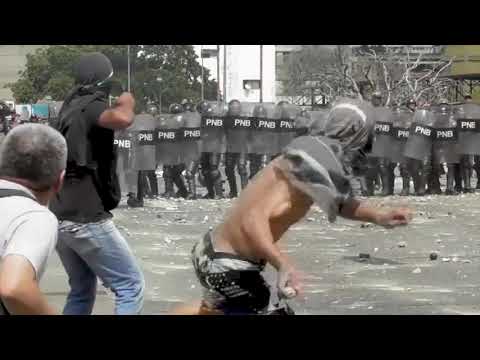 The Trump administration says Maduro’s order isn’t legal because the U.S. no longer recognizes him as Venezuela’s legitimate leader.

“They believe they have a colonial hold in Venezuela, where they decide what they want to do,” Maduro said in an address broadcast live on state TV. “You must fulfill my order from the government of Venezuela.”

Tensions have soared between the two nations after Trump recognized opposition leader Juan Guaido, who claimed Wednesday to hold the presidency and vowed to remove Maduro, calling him a “dictator.”

Attention has been on the military, a traditional arbiter of political disputes in Venezuela, as a critical indicator of whether the opposition will succeed in establishing a new government.

A half-dozen generals belonging largely to district commands and with direct control over thousands of troops joined Maduro in accusing the United States of meddling in Venezuela’s affairs and said they would uphold the socialist leader’s rule.

“It’s not a war between Venezuelans that will solve our problems,” he said. “It’s dialogue.”

Life in the capital appeared to be returning to normal Thursday after mass anti-government demonstrations a day earlier that left at least a dozen dead in the escalating conflict with Maduro, who has been increasingly accused of undemocratic behavior by the United States and many other nations in the region.

Guaido, 35, turned up the heat by declaring himself interim president on Wednesday before a mass of demonstrators in Caracas. He said it was the only way to end the Maduro “dictatorship” in Venezuela, which has seen millions flee in recent years to escape sky-high inflation and food shortages.

“We know that this will have consequences,” Guaido shouted to the cheering crowd before slipping away to an unknown location amid speculation that he would soon be arrested. His whereabouts remained cloaked in secrecy on Thursday.

Guaido has said he needs the backing of three critical groups: The people, the international community and the military. While yesterday’s protest drew tens of thousands to the streets and over a dozen nations in the region are pledging support, the military’s backing is far from certain.

Though many rank-and-file troops suffer the same hardships as countless other Venezuelans when it comes to meeting basic needs like feeding their families, Maduro has worked to cement their support with bonuses and other special benefits.

In a video addressing the military earlier this week, Guiado said the constitution requires them to disavow Maduro after his May 2018 re-election, which was widely condemned by the international community because his main opponents were banned from running.

But there were no signs that security forces were widely heeding Guaido’s call to go easy on demonstrators.

Gunfire during the protests and looting left 21 dead between Wednesday and early Thursday in the capital of Caracas and throughout the country, reported Marco Ponce, coordinator of the non-profit Venezuelan Observatory of Social Conflict.

Much of the international community is rallying behind Guaido, with the U.S., Canada and numerous Latin American and European countries announcing that they recognized his claim to the presidency. President Donald Trump promised to use the “full weight” of U.S. economic and diplomatic power to push for the restoration of Venezuela’s democracy.

China’s Foreign Ministry called on the United States to stay out of the crisis, while Russia’s deputy foreign minister warned the U.S. against any military intervention in Venezuela. Alexei Pushkov, chairman of the information committee at the Russian Federation Council, called Guaido’s declaration “an attempted coup” backed by the U.S.

Russia has been propping up Maduro with arms deliveries and loans. Maduro visited Moscow in December, seeking Russia’s political and financial support. Over the last decade, China has given Venezuela $65 billion in loans, cash and investment. Venezuela owes more than $20 billion.

Diplomats at the Organization of American States held an emergency meeting Thursday on the Venezuelan crisis, during which 16 nations recognized Guaido as interim president.

Meanwhile, many Venezuelans were looking for Guaido to re-emerge and provide guidance on the opposition’s next steps.

Guaido, a virtually unknown lawmaker at the start of the year, has reignited the hopes of Venezuela’s often beleaguered opposition by taking a rebellious tack amid Venezuela’s crushing economic crisis.

He escalated his campaign Wednesday by declaring that the constitution gives him, as president of the congress, the authority to take over as interim president and form a transitional government until he calls new elections.

Raising his right hand in unison with tens of thousands of supporters, he took a symbolic oath to assume executive powers.

On Monday, a few dozen national guardsmen seized a stockpile of assault rifles in a pre-dawn uprising that was quickly quelled, although residents in a nearby slum showed support for the mutineers by burning cars and stoning security forces. Disturbances flared up that night in other working-class neighborhoods where the government has traditionally enjoyed strong support, and continued into the late hours Tuesday.