DALLAS (AP) — The Latest on the trial of a former Dallas police officer convicted of murder in the shooting death of her neighbor inside his apartment (all times local):

A white former Dallas police officer has been jailed pending sentencing for the shooting death of her black unarmed neighbor.

Amber Guyger was booked into the Dallas County jail Tuesday afternoon after the first day of testimony was completed in the sentencing phase of her trial in Dallas. Jurors convicted Guyger of murder Tuesday in the September 2018 death of Botham Jean (BOH’-thuhm JAHN).

Testimony is to resume Wednesday morning. Guyger’s sentence could range from five years to life in prison under Texas law.

Jean, who lived upstairs from Guyger, was inside his own apartment when he was shot. Guyger has said she mistook his apartment for her own and thought Jean was an intruder. She was later fired from the police force.

Testimony has concluded for the day in the sentencing of a white former Dallas police officer convicted of murder in the fatal shooting of a black neighbor. 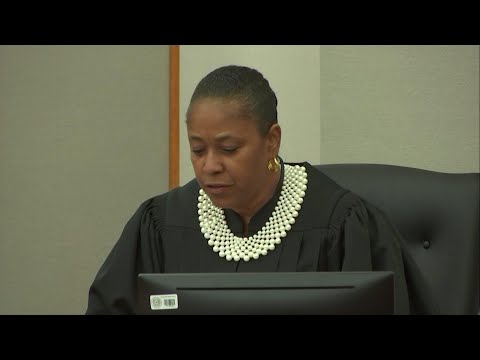 Attorneys for Jean’s family credited the makeup of the jury as contributing to the conviction, for which Guyger could be sentenced to from 5 to 99 years in prison. Attorney Ben Crump said the family expects the jury to deliver a weighty sentence.

Crump praised the diversity of the jury and said, “They will see past all the technical, intellectual justifications for an unjustifiable killing. And I believe they will do the right thing.”

The text messages, accepted as evidence over defense objections, include an exchange from Jan. 15, 2018, when she was working security during the Dallas Martin Luther King Jr. Day parade.

She groused that the parade could take up to three hours and suggested that parade participants could be pushed or pepper sprayed.

On Sept. 4, 2018, just days before Guyger shot Jean, she received a message suggesting that she would like a German shepherd that the messenger claimed was racist. She texted back that she hates “everything and everyone but y’all.”

The sister of a man killed in his apartment by a Dallas police officer says the lives of her family have not been the same since the shooting.

Allisa Findley testified Tuesday afternoon at the sentencing portion of Amber Guyger’s trial for the killing of Botham Jean. A jury found Guyger guilty of murder earlier in the day.

Findley told the jury that she and her mother cry a lot, and that her father is “not the same.” She says it’s as if the light behind his eyes has been turned off.

Findley says she worries about how her youngest brother has reacted to Jean’s September 2018 shooting.

Guyger cried during her own testimony earlier in the trial. The since-fired officer said she mistook Jean’s apartment for her own, one floor below, and thought he was an intruder.

The mother of a man who was shot to death in his own apartment by a since-fired Texas police officer is testifying at the sentencing phase of the officer’s murder trial.

Allison Jean is the mother of Botham Jean, who was fatally shot September 2018 by Amber Guyger. Allison Jean, who is from the Caribbean nation of St. Lucia, testified Tuesday as jurors considered how much time Guyger should spend in prison following her murder conviction earlier Tuesday.

Allison Jean, who is the chief executive officer of St. Lucia’s National Utilities Regulatory Commission, noted that her son would have turned 28 a few days ago.

She described her son as an excellent student who led several clubs at school. She says he created a choir at school because he loved to sing.

Attorneys representing the family of a black man killed in his own apartment by a white Dallas police officer called a guilty verdict in the case “a huge victory.”

Attorney Lee Merritt, who represents the family of Botham Jean, says Tuesday’s verdict against Amber Guyger is “a signal that the tide is going to change here.”

A jury in Dallas convicted Guyger on Tuesday of murder for the September 2018 death of Jean.

Guyger testified that she entered Jean’s apartment by mistake and killed him, thinking he was an intruder in her home.

Another Jean family attorney, Ben Crump, called the victim “a near perfect person of color” but said that shouldn’t be a requirement for people of color to get justice in the United States.

A gag order for prosecutors and defense attorneys and witnesses remains in effect until after Guyger’s sentencing, which is expected to begin later Tuesday.

Cheers could be heard in the Dallas County courthouse after a judge announced a guilty verdict in the trial of a former Dallas police officer in the shooting death of her neighbor.

Family members of Botham Jean and others embraced shortly after Judge Tammy Kemp announced that Amber Guyger was convicted of murder. She fatally shot Jean, an accountant from the Caribbean nation of St. Lucia, in September 2018.

Someone yelled, “Thank you, Jesus” following the verdict.

Guyger, who was fired following the fatal shooting, sat alone at the defense table and wept after the verdict announced.

The jury is expected to return Tuesday afternoon for the punishment phase of the trial. Guyger faces five to 99 years in prison.

A white former Dallas police officer has been found guilty of murder in the fatal shooting of her unarmed, black neighbor in his apartment.

A jury convicted Amber Guyger Tuesday in the killing of Botham Jean in September 2018.

Guyger was off-duty but still in uniform after a long shift when she shot the 26-year-old accountant from the Caribbean nation of St. Lucia.

At trial, Guyger apologized for killing Jean and said she feared for her life upon finding the door unlocked of what she thought was her apartment.

Guyger’s lawyers called the shooting a “tragic, but innocent” mistake.

Prosecutors questioned how Guyger missed numerous signs that she was at the wrong apartment.

Jean was unarmed and had been eating ice cream before Guyger entered his apartment.

Attorneys for the family of a man who was fatally shot in his apartment by a Dallas police officer say the jury at the officer’s murder trial asked about the castle doctrine defense presented in the case.

The doctrine enshrined in Texas law gives a resident the right to use deadly force to defend themselves or their home if they reasonably believe that it’s immediately necessary.

Amber Guyger testified that she thought she was in her own apartment when she killed Botham Jean in his home in September 2018.

The jurors also had questions about the definition of manslaughter.

Daryl Washington, an attorney for Jean’s family, said Tuesday that the judge told the jurors to rely on the guidance they were given Monday after closing arguments.

A jury has resumed deliberations in the murder trial of a former Dallas police officer who fatally shot her neighbor in his apartment.

Amber Guyger is charged in the September 2018 killing of Botham Jean.

The jury can convict Guyger of murder, manslaughter or can choose to acquit. Jurors deliberated for a couple of hours Monday afternoon and resumed deliberations Tuesday morning.

Guyger testified that she mistook Jean’s apartment for her own after a long shift and that she believed he was an intruder. The 31-year-old Guyger has said she feared for her life.

Prosecutors say it’s absurd Guyger didn’t pick up on clues that she was at the wrong apartment.

Guyger was charged with murder then fired from the force.