WASHINGTON (AP) — Robert Mueller refused to play the part. Not for Republicans and not for Democrats.

In back-to-back hearings before the House Judiciary Committee and the House Intelligence Committee, the former special counsel in the investigation of Russian interference into the 2016 presidential elections largely honored his pledge to stick to his 448-page report . He often answered questions in a single word.

Republicans tried to get Mueller to spell out the findings that there wasn’t enough evidence to prove any criminal conspiracy between the Trump campaign and Russia. Democrats pressed him to expand on the conclusion in his report that he could not exonerate President Donald Trump on possible charges of obstruction of justice.

But Mueller left both sides wanting.

Some key takeaways from his testimony:

MUELLER WOULDN’T BE A MOUTHPIECE

Mueller wouldn’t even read from his own report. That made it challenging for Democrats who called him in hopes that the sheer force of hearing him say the words on television would be more powerful to many Americans than the written form.

But Mueller demurred, and Democrats had to read his words for him. 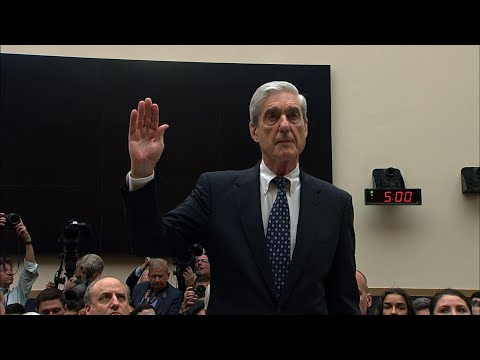 Similarly, Mueller wouldn’t answer specifically when Republicans repeatedly tried to question him about the origins of the Russia investigation, the use of secret surveillance warrants.

Mueller would only speak generally about Peter Strozk, a former FBI agent on his team who helped lead the investigation and exchanged anti-Trump text messages during the 2016 election with ex-FBI lawyer Lisa Page.

Mueller left it to the partisans to do the parsing.

Mueller was, for him anyway, far more expansive when he was asked about Russia’s interference in U.S. elections. He also condemned Trump’s praise of WikiLeaks, the anti-secrecy group that released material stolen from Democratic groups, including Hillary Clinton’s campaign.

“Problematic is an understatement,” he said.

U.S. intelligence agencies and Mueller’s investigation determined Russian government entities were responsible for the hack and furnished the embarrassing correspondence to WikiLeaks in order to support Trump’s bid for the presidency. Authorities also found Russia engaged in an organized social media effort to sow discord among American voters.

Mueller warned that what Russia did in 2016 was not a “single attempt.”

“They’re doing it as we sit here,” he told lawmakers.

INDICTING THE PRESIDENT WAS NEVER AN OPTION

During his testimony, Mueller made clear that his team never considered charging the president with a crime because of Justice Department guidelines.

Mueller, in his testimony Wednesday morning to the House Judiciary Committee, seemed to agree that he would have charged Trump with obstruction of justice had it not been for department guidance that a president cannot be indicted. Democrats seized on that answer, but Mueller then said, “That is not the correct way to say it.”

Mueller later said his team “did not reach a determination as to whether the president committed a crime.”

“IT IS NOT A WITCH HUNT”

Mueller swung back at the characterization made hundreds of times by Trump that the Russia investigation that shadowed his presidency was a “rigged witch hunt.”

“It is not a witch hunt,” Mueller testified.

Asked what he wanted the American public to take from his report, Mueller said: “We spent substantial time ensuring the integrity of the report.”

One of the only other times Mueller pushed back on lawmakers during hours of questioning was to offer a spirited defense of the investigation.

“I don’t think you all reviewed a report that is as thorough, as fair, as consistent as the report that we have in front of us,” Mueller said.

Mueller said his nearly two-year investigation was conducted in a “fair and independent manner.” He also repeatedly praised the prosecutors, FBI agents and analysts who worked on his team, saying they were “of the highest integrity” and were “absolutely exemplary.”

Mueller’s testimony likely did little to change many minds in Congress on impeachment. House Speaker Nancy Pelosi, D-Calif., has made clear she will not pursue impeachment, for now.

Mueller wouldn’t take the bait as Democrats asked whether he meant for his report to serve as a referral to Congress to consider impeaching the president. He even seemed to make strides to not even say the word.

Mueller refused to answer when asked specifically whether one of those was impeachment.

For more of AP’s coverage of the Trump investigation: https://apnews.com/TrumpInvestigations