Former White House Communications Director Hope Hicks has agreed to a closed-door interview with the House Judiciary Committee, according to two people familiar with the deal.

The panel subpoenaed Hicks last month as part of its investigation into obstruction of justice and special counsel Robert Mueller’s report.

The interview will be held June 19 and a transcript will be released, according to one of the people. It is a significant breakthrough for the committee, as President Donald Trump has broadly fought attempts at congressional oversight.

Hicks, a longtime aide to Trump, is mentioned throughout Mueller’s report.

The people familiar with the deal requested anonymity because they were not authorized to publicly discuss it.

House Intelligence Committee Chairman Adam Schiff says his panel is “determined to find out” more about Russian interference in the 2016 election and whether the U.S. is still vulnerable.

The California Democrat has opened a hearing on contacts between the Trump 2016 presidential campaign and Russia in an effort to keep public focus on special counsel Robert Mueller’s (MUHL’-urz) report. 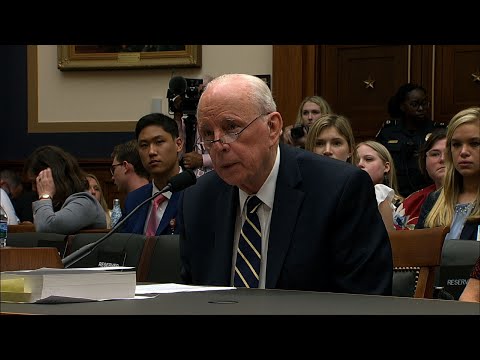 Mueller did not find a criminal conspiracy but did detail a series of interactions and outreach between the campaign and Russia.

The top Republican on the panel, California Rep. Devin Nunes (NOO’-nehs), says Wednesday’s hearing is part of “endless hysteria” by Democrats and the media and calls Mueller’s report “a shoddy political hit piece.”

The House Intelligence Committee has invited two former leaders of the FBI’s national security branch to testify about the counterintelligence implications of Mueller’s investigation.

Both ex-FBI officials, Robert Anderson and Stephanie Douglas, retired from the bureau before it launched its investigation into the Trump campaign in summer 2016. By inviting them instead of agents involved in the investigation, Democrats are giving center stage to career officials more likely to be seen as neutral.

It is unclear whether Republicans will seek to undermine the credibility of the witnesses, or merely try to minimize their testimony by noting that they weren’t part of the investigation.