Michael Kors’ upbeat mood is reflected in his collection

NEW YORK (AP) — Michael Kors’ response to these turbulent times is to provide a dose of effervescence to lift the mood — and that was certainly the case with his New York Fashion Week show.

The event, which drew celebrities including Nicole Kidman, Catherine Zeta-Jones, Tiffany Haddish, Iman and Hailee Steinfeld in the front row, featured a collection that had romance, color and a dose of the flirty.

“It’s the melange of things you find around the world but it’s all about optimism. I think there’s too much sadness. I think a lot of people think for fashion to be chic, it has to be sad. I don’t believe that,” Kors added backstage before Wednesday’s show.

Kors travels the globe, and it was those adventures that inspired his tropical florals, ruffle skirts and looks in silk mesh and cashmere.

“These are clothes that are built for a fast life and it’s really the sprinkle of influences from around the world, so there’s a little bit of Rio, there’s a little south of France, there’s a little Australia. A little L.A. All of it together and when you’re stuck in a gray city, you know we dream of turquoise water and blue skies and a sunny day.” 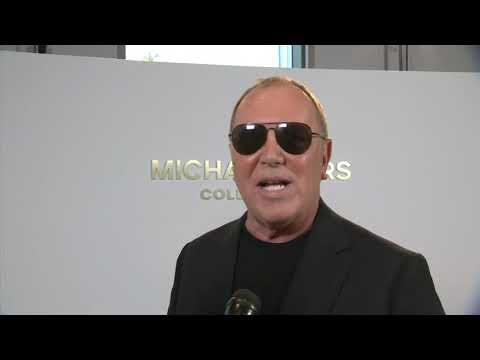 Kors is known around the world. He said he’s conscious of having a global consumer. In fact, it keeps things more interesting.

“I find it a lot more exciting to actually think about just this wonderful mosaic of different women of different ages of different nationalities, and also with their own sense of style. I think if I do my job well you could be 17 or you could be 85,” he said. “You could be any size or live anywhere in the world and have a lot of style and look great.”