FLAGSTAFF, Ariz. (AP) — The names pop up quickly on Whitney Rencountre’s computer screen, and he greets them as he would in person.

What’s up, y’all? Shout out to you. How’s it going? Ya’at’eeh. Good to see you, relatives.

He spots someone from the Menominee Nation, a Wisconsin tribe that hosts competitive dancers, singers and drummers in traditional regalia in late summer.

“Beautiful powwow there,” he says.

The emcee from the Crow Creek Sioux Tribe in South Dakota typically is on the powwow circuit in the spring, joining thousands of others in colorful displays of culture and tradition that are at their essence meant to uplift people during difficult times. Amid the coronavirus pandemic, the gatherings are taking on a new form online.

“Sometimes we have this illusion that we’re in total control, but it takes times like this of uncertainty and the challenges of the possibility of death to help us step back and reevaluate,” said Rencountre, a co-organizer of the Facebook group Social Distance Powwow, which sprung up about a month ago as more states and tribes advised people to stay home.

Normally this time of year, a string of powwows hosted by Native American tribes and universities would be underway across the U.S., with tribal members honoring and showcasing their cultures — and socializing, like family reunions. The powwows represent an evolution of songs and dances from when tribal traditions were forced underground during European settlement, Rencountre said. 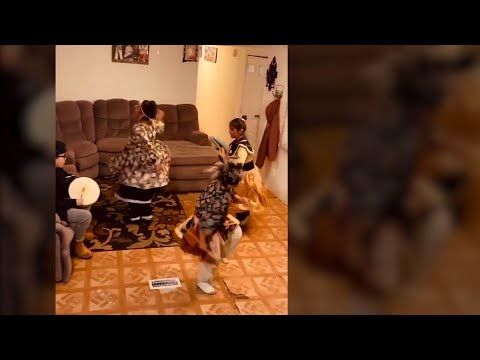 The pandemic has canceled or postponed virtually all of them, including two of the largest in the U.S. — the Denver March Powwow and the Gathering of Nations in Albuquerque, New Mexico, held in April.

Members from different tribal nations post photos and videos of themselves and loved ones dancing, often in their regalia. The page has become a daily dose of prayer, songs, dances, well wishes, humor and happy birthdays.

In one video, Jordan Kor sits in his vehicle after a shift at a San Jose, California, hospital emergency department. An old Dakota war song he learned as a child that can be a rallying cry was bouncing around his head. He pulls off his mask and cap and sings, slapping a beat on the steering wheel.

“The biggest ones, social distance, keep working in whatever it is that brings you joy and helps you keep connected,” said Kor, who is Tarahumara and Wapetonwon Lakota. “And wash your hands!”

The page also hosts a weekly, live powwow with the organizers — Rencountre, Stephanie Hebert and Dan Simonds — assembling a lineup of volunteer drum groups, singers and dancers for the hours-long event. This past weekend, Rencountre patched people in from across the country on the live feed.

A marketplace on the site lets vendors showcase their paintings, beadwork, jewelry, basketry and clothing.

An online powwow may lack some of the grandeur of being in person and seeing hundreds of performers fill an arena for the grand entry. But it offers a way to keep people connected.

“When we dance, we are dancing for prayer and protection,” said member Mable Moses of the Lumbee Tribe in North Carolina. “No matter what we do, may the Lord always protect us whether we’re living or dying.”

Moses learned to dance later in life and now competes in the “golden age” category at powwows. In a video of her Southern Traditional dance, she moves around a dogwood tree in her yard slowly but with high energy.

Moses said the dance meant to calm people helps her cope with the fear surrounding the coronavirus, and the difficulty of staying away from others.

For those viewing for the first time, Rencountre encourages an open mind.

“We ask them to break down the wall, to feel the dances, to feel the songs, as you’re watching,” he said. “Don’t think about it from a technical point of view. Understand the creation of these songs and dances comes from a place of uplifting.”

Leiha Peters grew up doing jingle dress dance meant for healing. The dress is characterized by cone-shaped jingles typically made from the lids of tobacco cans. Now, she does beadwork for her children’s outfits and is a Seneca language teacher.

Full Coverage: Life During a Pandemic

She recently posted a video of two of her children and their cousins doing smoke dance in the living room of her home on the Tonawanda Indian Reservation northeast of Buffalo, New York. Its origins are mixed as a dance for men to bless themselves before they went to battle and a way to clear smoke from traditional homes called longhouses, she said.

Her children grow up knowing the respect and the protocol that accompany the dance and its songs. They also have fun with it, sometimes competing in the family’s backyard to win cups of Kool-Aid or bags of candy, Peters said.

“For them, dancing is medicine on its own. It’s everything to us,” she said. “It’s energy, it’s athleticism, it’s staying healthy and living a better life with food choices. It’s not easy doing what they do.”