HONG KONG (AP) — In a fearsome escalation of violence, Hong Kong police shot a protester in the chest at close range Tuesday, leaving the teenager bleeding and howling on the ground. Tens of thousands joined anti-government demonstrations that spread across the semi-autonomous Chinese territory in a challenge to Beijing’s dominance as the Communist Party celebrated 70 years in power.

The officer fired the single pistol shot as protesters swarmed toward him, Police Commissioner Stephen Lo said, hitting the 18-year-old on the left side of his chest. Lo defended the action as “reasonable and lawful,” saying the officer feared for his life and had no other choice.

Hong Kong’s hospital authority said the teen was one of two people in critical condition, with a total of 66 injured as fierce clashes between protesters and police wracked China’s freest and most international city.

While officers have fired warning shots in the air on multiple occasions during months of unrest, this was the first time a protester has been struck by gunfire. The shooting marked a dramatic surge in violence that spread chaos to multiple areas.

Lo said there was no order for police to shoot if they are under threat but they can use appropriate force. He described protesters as “rioters,” saying they have committed widespread criminal acts — from attacking police officers, including 25 who were injured, to destroying public property and vandalizing shops and banks linked to China. 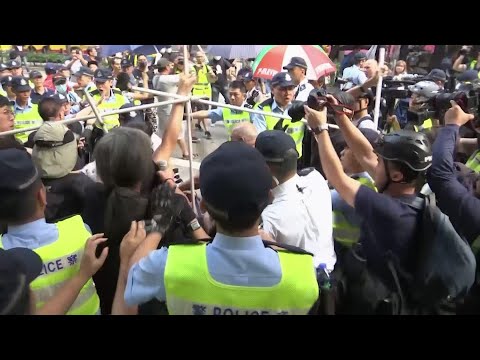 VIDEO: The first clashes in what became a day of rage.

“The officer was under attack, his life was threatened. ... He made a very quick decision and shot the assailant. I believe it was his best judgment at the time,” Lo said.

He added that although the officer also had a rifle for rubber bullets, the event unfolded very quickly. He didn’t answer questions on why the officer fired at the teen’s chest and not his limbs.

Apart from the incident in Tsuen Wan, where the teen was shot, he said officers also fired five warning shots in four other areas, although no one was injured. Police arrested more than 180 protesters, he added.

Video that spread quickly on social media appeared to show the officer opening fire as the masked teenager came at him with a metal rod, striking the officer’s shooting arm. Taken by the City University Student Union, it showed a dozen black-clad protesters throwing objects at a group of police and closing in on the lone officer who pointed his gun and opened fire. The protester toppled backward onto the street, bleeding from below his left shoulder.

As another protester rushed in to try to drag away the wounded youth and was tackled by an officer, a gasoline bomb landed in the middle of the group of officers in an explosion of flames.

“Whilst there is no excuse for violence, the use of live ammunition is disproportionate, and only risks inflaming the situation,” U.K. Foreign Secretary Dominic Raab said of the protests in the former British colony that returned to Chinese rule in 1997.

Chanting anti-China slogans and “Freedom for Hong Kong,” the dense crowd dressed in mournful black snaked for over a mile (1.6 kilometers) along a broad thoroughfare downtown in defiance of a police ban. Some carried Chinese flags defaced with a black cross. Organizers said at least 100,000 people marched in the biggest rally Tuesday. Police didn’t give an estimate.

“They are squeezing our necks so we don’t breathe the air of freedom,” said King Chan, a 57-year-old homemaker who marched with her husband.

Demonstrators tossed wads of fake bank notes usually used at funerals into the air. “The leaders who won’t listen to our voice, this is for them,” said marcher Ray Luk.

Thousand others confronted police across the city, the largest number of simultaneous protests since the unrest began in early June over a now-shelved extradition bill that activists say was an example of how Hong Kong’s freedoms and citizen rights are being eroded. The movement has since grown into an anti-Chinese campaign with demands for direct elections for the city’s leaders and police accountability. 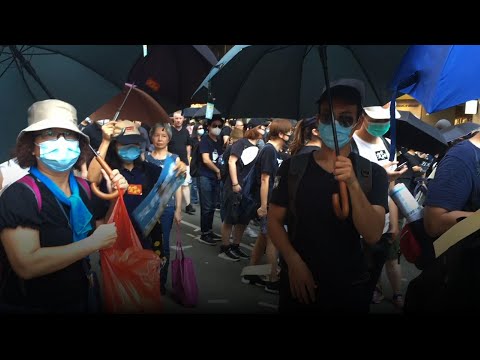 “Today we are out to tell the Communist Party that Hong Kong people have nothing to celebrate,” said activist Lee Cheuk-yan as he led the downtown march. “We are mourning that in 70 years of Communist Party rule, the democratic rights of people in Hong Kong and China are being denied. ”

As protesters hoped, the chaos in Hong Kong contrasted with anniversary festivities in Beijing, which included a muscular parade of military might. Among those attending was Hong Kong Chief Executive Carrie Lam, whose leadership during the crisis has made her a hate-figure for many protesters.

As the city’s government marked the anniversary with a solemn morning ceremony, police used pepper spray to break up a brief scuffle between Beijing supporters and a small group of pro-democracy protesters.

Hong Kong Chief Secretary Matthew Cheung told hundreds of guests at a reception that the city has become “unrecognizable” due to the violence. Cheung said Beijing fully supports the “one country, two systems” framework that gives Hong Kong freedoms and rights not enjoyed on the mainland.