NEW YORK (AP) — Frumie Cisner remembers the first time she witnessed a Holocaust survivor picking through trash — how the woman scavenged a box of baked goods from a dumpster in front of a Brooklyn synagogue.

“It was heartbreaking,” Cisner said. “You’re not talking about luxuries. It’s food. You would never dream that they go through this kind of poverty.”

And yet, it’s not uncommon. Decades after they suffered unspeakable horrors at concentration camps, many Holocaust survivors in the United States live in poverty and rely on donations because they struggle to pay their rent and even food.

Cisner’s shock at seeing survivors rummaging through the trash prompted her organization, the Nachas Health and Family Network, to offer daily meals to dozens of survivors who visit the Brooklyn center.

Nachas (Yiddish for “joy”) is part of a network of community centers that offer all sorts of services to the diminishing ranks of Adolf Hitler’s victims. About 40 survivors come here to socialize, receive legal assistance, study Torah, exercise, get counseling — and to eat.

“Jewish victims of Nazi persecution living in the U.S. are more likely than other Jewish elderly and other American elderly to be living in poverty,” according to the New York-based Conference on Jewish Material Claims Against Germany. “Survey research shows that 25% of all Nazi victims live at or below the official U.S. poverty threshold.” 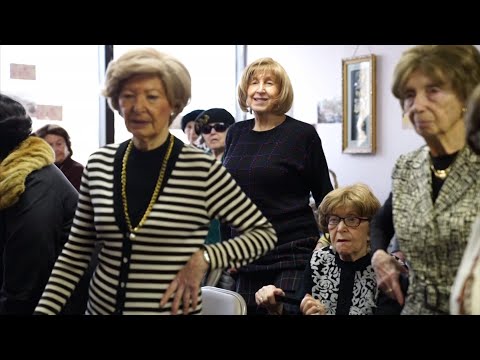 The number is even higher in the New York City metropolitan area, where it is estimated that more than 38,000 Holocaust survivors live, according to Selfhelp Community Services, a non-profit organization that focuses on research on Holocaust survivors and provides them with services.

“This last generation of survivors will have complex needs. Fully 35% of survivors will be coping with serious or chronic illnesses, and 41% will need help with daily tasks,” the group said in a report. “Fifty-two percent will be `poor’ under Federal guidelines” in 2020, the report said.

“It’s a tough statistic to wrap your head around. After what the survivors went through earlier in their lives, it’s certainly a struggle that they have to deal with this as well,” said Sandy Myers, vice president for external relations and communications at Selfhelp.

“Many people don’t know about this because speaking about poverty is not easy for any of us and they’re incredibly strong and proud and resilient,” she said. “They sometimes say: ‘We survived Hitler, so we can get through anything.’ This is a population that’s very proud, and it makes it difficult to talk about their struggles.”

Many of them were tattooed with ID numbers, shorn of hair and used as slave labor. Some nearly starved and witnessed family members killed. Sometimes, they’ll share these experiences, but mostly they prefer to focus on the activities that keep them alive.

On a recent day, in a room decorated with paintings of Israel’s Hebron Valley and of people praying at the Western Wall, a group of survivors placed their hands on their waists, lifted their arms and legs and swayed side to side. Some held chairs for balance.

“No cheating!” announced fitness instructor Mindy Landau, eliciting giggles from three dozen women, all in their 80s and 90s.

Afterwards, Rizy Horowitz, who handles the Holocaust project at Nachas, handed out containers of kosher food to the group. They also took home a second meal. “Each time they come here, they go home with a packed meal,” Horowitz said. Some days the center schedules a pizza night, combining dinner and socializing.

“This is wonderful for us,” said Shirley Fernbach, 92. “What would I do at home? This way we get out and we meet people.”

“And we share stories!” said Berta Einhorn, 89. They shared a table with Lilly Klein, 94. The three friends were born in Hungary, survived Auschwitz as well as a death march to the Bergen-Belsen concentration camp. But they only met decades later at Nachas.

“We’re getting together like like-minded people,” said Klein, who lost seven siblings and 34 nieces and nephews in the Holocaust. “We all went through the same.”

Blocks away, Club Nissim offers survivors a wide range of activities ranging from swimming, cooking and choir lessons to movies, arts and crafts and trips to museums and parks. The program that began in 2001 is located at Borough Parks’ Young Men’s and Young Women’s Hebrew Association. Its name Nissim comes from the Hebrew word for miracle, chosen by survivors because they felt it was a miracle to be alive.

Director Simonne Hirschhorn said Nissim also tries to offer activities that they may have missed because their childhoods were often spent fighting for simple survival. Recently, it sponsored a slumber party for the women, complete with pajamas and a breakfast with pancakes.

“It shouldn’t sound like it’s kindergarten for the elderly. It’s about giving joy to people who have had very hard lives,” she said.

Holocaust outreach at Nachas began in the mid-1990s as an effort to obtain reparations. It came after the Swiss government decided to create a fund for survivors, Horowitz said. The decision followed criticism by Jewish groups who said that Swiss bank officials blocked survivors and their heirs after WWII by claiming they could not find accounts.

Since then, Nachas has helped recover thousands of dollars in reparations for hundreds of survivors, some who also count on reparations money that they get from Germany as part of a program that began in 1952. Horowitz said the money is not enough, so survivors often reach out asking for help to pay for rent and other expenses.

Nachas has received funding from groups, including the Elie Wiesel Foundation, and the Conference on Jewish Material Claims Against Germany, the organization that negotiates compensation with the German government. Some of the money continues to pay for the group’s exercise classes and therapy.

“It’s group therapy. They didn’t have friends because when they came back from Holocaust, they didn’t have time for this luxury to have friends,” said Yafa Fetman, a social worker who has led the counseling and Torah lessons at Nachas for more than a decade.

“They have two options: they can go to the doctor’s office or to come here three times a week.”

A recent day ended with the group sharing chocolate cake. The entertainment: 9-year-old Avrumy Cisner, who stood on a chair and serenaded them in Hebrew.

“This is a good place, Nachas,” Einhorn said. “We have exercise, we have lectures and we have movies. And it just keeps us going a little.”

Emily Leshner in New York contributed to this report.