CHICAGO (AP) — Illinois Gov. J.B. Pritzker on Thursday mandated that events of 1,000 or more people be canceled or postponed for 30 days, and asked the owners of all the state’s major sports teams to cancel games or play without fans until May 1 as efforts continue to combat the spread of the coronavirus.

Pritzker said during a news conference he is requesting that events of 250 people be canceled or postponed as well. Pritzker said he is not ordering schools to close “but we are monitoring the situation on a day to day basis.”

“At this time, CPS will remain open,” said Chicago Mayor Lori Lightfoot. “We would never put our children in danger.”

Pritzker asked that every private business that is able to have employees work remotely consider doing so immediately. He said businesses that do not need to consider plans to promote “social distancing” to combat the spread of COVID-19.

“I wish I could tell you that going about your everyday lives without adjustments was the best course of action right now,” Pritzker said. ``It is not. And I owe you honesty.”

Pritzker says he knows some people will ask whether these measures are necessary in places that don’t have documented cases of the new virus, but says “we have seen what works and what doesn’t work in countries around the world.” 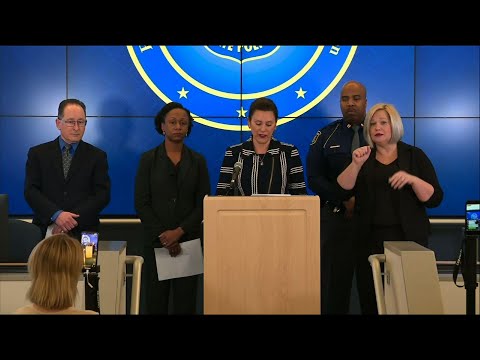 “Don’t be fooled into thinking that your community is immune,” he said. “It is not.”

For most people, the new coronavirus causes only mild or moderate symptoms, such as fever and cough. For some, especially older adults and people with existing health problems, it can cause more severe illness, including pneumonia. The vast majority of people recover from the new virus.

The number of coronavirus cases in Illinois now totals 32, according to the Illinois Department of Public Health.

“The virus is here in Illinois. While it may not be in your community now, we anticipate it will be eventually. We all need to take action now by postponing large events and restricting visits to nursing homes to limit the spread,” said IDPH Director Dr. Ngozi Ezike.

Pritzker said Tuesday’s primary election will go forward, and he encouraged all election authorities to extend their early voting hours.

Some of Chicago’s leading cultural institutions responded almost immediately to the governor’s mandate to cancel or postpone events attracting 1,000 or more people. The Chicago Symphony Orchestra Association announced that all concerts of the orchestra scheduled through the next 30 days were canceled, starting with Thursday night’s concert featuring the music of Gershwin and Ravel. The Steppenwolf Theatre Company canceled two productions and the Goodman Theatre announced all its performances are suspended until further notice.

A spokesman for the Lyric Opera says a decision on whether its production of Wagner’s complete ``Ring” will go forward has yet to be made.

Prior to Pritzker’s mandate, the Chicago Cubs and Chicago White Sox had already announced delays of their home openers to the second week of April at the earliest, and the NBA and NHL had suspended their seasons.

The spread of the coronavirus has made the University of Chicago to move to remote learning for undergraduate and graduate classes for the entire spring quarter beginning March 30.

The announcement came a day after Illinois, Southern Illinois, DePaul, Northwestern and Illinois State universities announced the suspension of in-person classes due to coronavirus concerns.. Loyola University in Chicago also announced the cancellation of in-person classes. Western Illinois University said it is cancelling classes from March 14 until March 20, and that when classes resume they will take place online, until at least April 3.

The schools joined colleges and universities nationwide that have announced a halt to face-to-face instruction for several weeks to stem the spread of the coronavirus, now declared a pandemic by the World Health Organization. None of the Illinois universities have reported cases of COVID-19 on their campuses.

Games affected by the cancellations include the 2020 IHSA Class 1A/2A Boys Basketball State Finals on Friday and Saturday, as well as the remaining contests at the Class 3A and Class 4A sectionals, super-sectionals and state finals. The IHSA State Series’ in Debate, Drama & Group Interpretation and Scholastic Bowl.