In Santa Barbara, forklifts chug through the warehouse of Direct Relief, hustling pallets of much-needed medical supplies into waiting FedEx trucks. Normally those gloves, masks and medicines would go to desperately poor clinics in Haiti or Sudan, but now they’re racing off to Stanford Hospital in Palo Alto, California and the Robert Wood Johnson Hospitals in New Jersey.

Direct Relief is just one of several U.S. charities that traditionally operate in countries stricken by war and natural disaster that are now sending humanitarian aid to some of the wealthiest communities in America to help manage the coronavirus pandemic.

He is organizing flights of supplies directly from the group’s own manufacturers in China to the Santa Barbara warehouse, and also coordinating shipments from other producers around the world. After spending two decades providing relief to disaster zones, Tighe exudes a calm in the midst of this emergency.

The medical charity Doctors Without Borders spent months fighting coronavirus around the world and is now trying to save lives just down the street from their New York offices. The group is supporting soup kitchens, setting up hand-washing stations, and training local officials how to prevent the spread of infection. Samaritan’s Purse International erected a 14-tent field hospital with an ICU in Central Park.

That international aid groups are supporting the U.S. healthcare system shows how dire the need is domestically, and how inadequate the federal response has been.

“We now see nonprofits that traditionally help weak governments coming in to substitute for our national government,” said Evelyn Brodkin, political scientist and professor emerita at the University of Chicago. “We’re lucky they’re here. But it tells you something about the abdication of the federal role in this crisis.”

U.S. blunders related to testing have hindered efforts to contain the virus’ spread, and the government was late to respond to critical shortages as imports of medical supplies plummeted.

“Clearly, we have been caught flat-footed,” said Dr. Ashish Jha, director of Harvard University’s Global Health Institute. “The fact that resources from these organizations are coming to the U.S. is, on one hand, helpful to Americans, but pathetic in terms of what it says about American responsiveness.”

President Donald Trump, by contrast, has said the administration has done a “really good job” responding to the outbreak.

EDITOR’S NOTE — This story is part of an ongoing investigation by The Associated Press, the PBS series FRONTLINE, and the Global Reporting Centre that examines the deadly consequences of the fragmented worldwide medical supply chain.

“CARE has never delivered in the U.S. before now, but this pandemic has meant a scale up in our response internationally and here at home as well,” said CEO Michelle Nunn.

Feed the Children, meantime, is distributing aid to all five of its hubs across the country.

For the first time, MedShare, an Atlanta-based nonprofit that repacks surplus medical supplies and sends them to clinics around the world, is delivering protective gear to major U.S. hospitals including Cedars-Sinai Medical Center in Los Angeles and Grady Memorial Hospital in Atlanta.

Still, hospitals across the country are running short of supplies, and have to ration gear such as masks and gowns, a common practice in medical facilities in less stable countries. 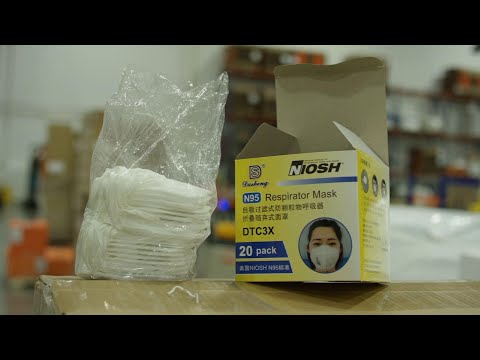 Dr. Rasha Khoury, who’s been on surgical missions in Sierra Leone, Lebanon, Cote d’Ivoire, Iraq and spent more than a year in Afghanistan as a member of Doctors Without Borders, is back at her regular job in a Bronx, New York, hospital. But she’s using lessons learned in her overseas experiences every day.

“This is the first time I’ve ever felt a parallel between my work in precarious situations and my work here in the U.S.,” she said.

Abroad, for example, she gets one N95 respirator mask every two weeks, so she’s accustomed to rationing protective gear. In humanitarian medicine, she says, she quickly trains specialists to practice areas of medicine they’re not used to. High patient volumes, blood shortages and teams in crisis are all familiar challenges.

And she worries that if New York, one of the most heavily resourced health care systems in the world, is struggling to get what it needs to care for COVID-19 patients, then infection control, triage and providing basic care are all going to be that much more of a crisis in impoverished countries.

Dr. Jean Fritz Jacques, a general surgeon in Haiti who runs Healing Arts Mission Clinic, is bracing for the worst.

His country is utterly unprepared for the pandemic, and he’s watching the group’s U.S.-based donors supply American institutions. In Haiti, private hospitals are closing for lack of supplies and equipment, and public hospitals aren’t ready, he said.

“We are just praying that the chaos will not happen,” Jacques said.

Kate McCormick of the Global Reporting Centre contributed to this report.