WASHINGTON (AP) — With historic impeachment hearings underway, Democrats and Republicans are hardening their arguments over the actions of President Donald Trump as they set out to win over a deeply polarized American public.

Democrats say Wednesday’s extraordinary public session in the House revealed a striking account of Trump abusing his office by pressing the newly elected president of Ukraine for political investigations of rival Democrats, all while holding up needed military aid. “Bribery,” they said, and “extortion.”

Republicans counter that the hearing showed none of that. They say the two seasoned diplomats at the witness table had, at best, secondhand accounts of Trump’s July 25 call that’s central to the impeachment inquiry. There was no pressure on the young Ukraine leader, they argue, and eventually the aid flowed, though only after Congress intervened.

Day One of the rare public hearings in the House — part of only the fourth formal impeachment effort in U.S. history — set the contours for a once-in-a-generation political struggle. Images and audio from the hearing popped up on television, in earbuds and on the partisan silos of social media, providing the first close-up look at the investigation. 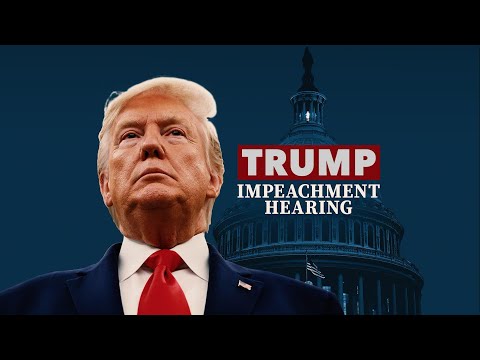 “The president sought to advance his political and personal interests at the expense of U.S. national security,” said Rep. Adam Schiff of California, the Democratic chairman of the House Intelligence Committee leading the probe.

“Is this now going to be the new normal?” Schiff asked.

Hosting the president of Turkey at the White House, Trump insisted he was too busy to watch the hearings being broadcast live across the country and the world. He denied a fresh detail from one of the witnesses about a phone call in which he was overheard asking about “the investigations.”

“First I’ve heard of it,” Trump told reporters during a news conference.

A different conversation sparked the impeachment investigation, Trump’s July 25 phone call with Ukraine President Volodymyr Zelenskiy, heard by several government officials and detailed in a partial transcript released to the public weeks ago. The core moment came when Trump asked the newly elected leader for “a favor.”

House Minority Leader Kevin McCarthy, R-Calif., said Wednesday that the Democrats’ first witness “wasn’t on the phone call, never met with the president, never talked to the chief of staff. And he’s their star witness?”

Trump wanted Ukraine’s government to investigate Democrats’ activities in the 2016 election and his potential 2020 rival Joe Biden — all while the administration was withholding military aid for the Eastern European ally as it confronted an aggressive neighbor, Russia.

All day, the two diplomats delivered a dramatic, though complicated, account. They testified about how an ambassador was fired, the new Ukraine government was confused and they discovered an “irregular channel” — a shadow U.S. foreign policy orchestrated by the president’s personal lawyer, Rudy Giuliani, that raised alarms in diplomatic and national security circles.

Trump restated his aggressive defense with rapid-fire tweets, a video from the Rose Garden and a dismissive retort from the Oval Office: “It’s a witch hunt. It’s a hoax.”

Career diplomat William Taylor, the charge d’affaires in Kyiv, offered new testimony that a staff member recently told him of overhearing Trump when they were meeting with another diplomat, U.S. Ambassador Gordon Sondland, at a restaurant the day after Trump’s July 25 phone call.

In the face of Trump’s denial, Schiff expects the person to appear before investigators for a closed-door deposition. He is David Holmes, the political counselor at the embassy in Kyiv, according to an official unauthorized to discuss the matter and granted anonymity.

Across the country, millions of Americans were tuning in — or, in some cases, deliberately tuning out.

Viewers on the right and left thought the day underscored their feelings. Anthony Harris, cutting hair in Savannah, Georgia, had the hearing on in his shop, but he said, “It’s gotten to the point now where people are even tired of listening.”

The hours of partisan back-and-forth did not appear to leave a singular moment etched in the public consciousness the way the Watergate proceedings or Bill Clinton’s impeachment did generations ago.

Still, the session unspooled at least partly the way Democrats wanted with the somber tones of career foreign service officers telling what they knew. They sounded credible.

The witnesses, the graying Taylor and Deputy Assistant Secretary of State George Kent in his bow tie, defied White House instructions not to appear. Both had received subpoenas.

They are among a dozen current and former officials who already testified behind closed doors. Days of public hearings will stretch into next week.

Both Kent and Taylor, who was asked by Secretary of State Mike Pompeo to return to Ukraine as Trump was firing Ambassador Marie Yovanovitch, defended their ousted colleague. She is set to testify Friday.

A Trump ally on the panel, Republican Rep. Jim Jordan of Ohio, mockingly called Taylor the Democrats’ “star witness” and said he’d “seen church prayer chains that are easier to understand than this.”

Taylor, a West Point graduate and an Army infantry officer in Vietnam, responded: “I don’t consider myself a star witness for anything.”

The top Republican on the panel, Rep. Devin Nunes of California, said Trump had a “perfectly good reason” for wanting to investigate the role of Democrats in 2016 election interference, giving airtime to a theory that runs counter to mainstream U.S. intelligence which found that Russia intervened and favored Trump.

Nunes accused the Democratic majority of conducting a “scorched earth” effort to take down the president after the special counsel’s Russia investigation into the 2016 election failed to spark impeachment proceedings.

The veteran foreign service officers delivered heartfelt history lessons about Ukraine, a young and hopeful democracy, situated next to Russia but reaching out to the West.

Republicans sought to hear from the anonymous whistleblower whose official complaint alerted officials to the July 25 call by subpoenaing him for a closed session. The panel voted down the request and Schiff repeatedly denied the GOP claim that he knows the person.

“We will do everything necessary to protect the whistleblower’s identity,” Schiff declared.

The Constitution sets a dramatic but vague bar for impeachment. There’s no consensus yet that Trump’s actions at the heart of the inquiry meet the threshold of “high crimes and misdemeanors.”

House Speaker Nancy Pelosi was initially reluctant to launch a formal impeachment inquiry. But she pressed ahead after the whistleblower’s complaint. She said Wednesday it was sad that the country has to undergo the inquiry with Trump but “he will be held accountable.”