BUFFALO, N.Y. (AP) — Buffalo kindergarten teacher Maria Spurlock was still struggling after trying for more than a week to get a reading app working on all of her classroom iPads. When she learned her building had a new team of technical experts, she put in a request for help.

In walked 11-year-old Arefa Zaman, a sixth-grader with silver sneakers and a yellow “tech squad” T-shirt, who quickly went to work.

Buffalo Public Schools officials say it only makes sense for the youngsters who have grown up with technology to be part of the upkeep of the district’s thousands of iPads and laptops used every day. Students, in turn, hone practical skills.

It’s a strategy playing out around the country as schools increasingly supply devices to every student.

Student techs learn hardware and software fixes for the inevitable cracked screens, stuck keys, freeze-ups and dead batteries from school staff, each other, and online tutorials. Buffalo students even make field trips to an Apple store to learn technical support.

“They can do anything. Anything that we can do here, they can do,” said technology specialist Jerilyn Stellato, talking about her “Tech Team Junior” members at Oliver W. Winch Middle School in South Glens Falls, New York.

Modeled after Apple’s “genius bars,” the group works out of the library during and after school to service student Chromebooks. 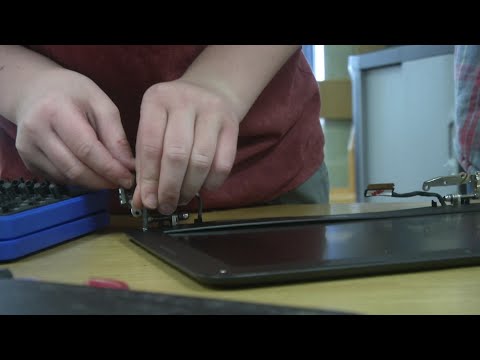 In 2018, 59% of high schools and 63% of middle schools reported that each of their students had access to their own device, an annual survey by the Consortium for School Networking found, up from 53% and 56%, respectively, in 2017. Elementary schools with 1:1 programs, which supply each student with a device, increased from 25% to 29%.

Despite concerns from some about excessive screen time, fees sometimes passed along to students, and the challenge for teachers to incorporate the technology into meaningful lessons, the consortium predicted 38% of students would have not one, but two devices within three years and that 18 percent would have three devices in that time.

“For districts who don’t have the manpower, it’s a big undertaking. Little help desks like this where the kids take initiative and take care of the problems really does help out,” said Corey Moore, district technology technician in Kentucky’s Fairview Independent Schools.

His suburban district gives every student from third grade up a Chromebook on which they do most of their schoolwork, about 600 devices in all.

About 10-15 students take turns staffing a shop set up in the atrium during the day.

“They are trained in full and complete tear down and repair of these devices, from screens to logic boards to as simple as ‘my headphone broke off in my Chromebook, can you get it out?’” Moore said.

But it’s not all about repair.

In Buffalo, technology leaders realized early on that the task of collecting and getting the devices ready between school years would overwhelm its existing technology staff.

Last school year, more than 10,000 devices were distributed. This year, with the 1:1 rollout complete, the number has more than doubled.

“We had to go to different schools and get the computers of the students and reimage them, which is to basically reprogram the whole laptop, delete everything they used and install newer versions,” said Galib Ovik, a junior who interned last year. He is now part of a fledgling “geek squad” at Bennett High school, one of several the district hopes to establish.

“These are all skills that they will be able to take with them once they leave us,” said technology coach Brianna Pride, who oversees the student technicians.

For Spurlock, the Buffalo kindergarten teacher, the age of the technician who responded to her request didn’t matter.

“I did all I was supposed to do to try to get on that app and I could not,” she said, calling herself “a little tech challenged.”

Upon arriving at Spurlock’s classroom, 11-year-old Arefa deleted an older version of the problem app and re-installed it before delving deeper into the issue.

“Once I tried it, I knew what the problem was,” Arefa said. “Since they’re only kindergarteners, they can’t remember their username and password.”

She set it up so students could log in to the reading app through another program, using a scan code they could hold up to the device instead of having to enter a password.

“I was just amazed that she was able to fix it,” Spurlock said. “It was like calling an adult.”

“I did not grow up with technology the way that the kids these days have,” Buffalo teacher Amy Burdette said. “The 11-year-olds know far more than I do, so they’re often teaching us as much as we’re teaching them other skills.”