The Florida Education Association lawsuit argues that reopening this fall would put students and school employees at risk -- as well as accelerate the spread of the coronavirus. The lawsuit, filed in state Circuit Court in Miami, names as defendants Gov. Ron DeSantis, Education Commissioner Richard Corcoran, the Florida Department of Education and Miami-Dade County Mayor Carlos Gimenez.

“Governor DeSantis needs a reality check, and we are attempting to provide one,” said FEA President Fedrick Ingram. “The governor needs to accept the reality of the situation here in Florida, where the virus is surging out of control.”

“Everyone wants schools to reopen, but we don’t want to begin in-person teaching, face an explosion of cases and sickness, then be forced to return to distance learning,” Ingram added.

Florida reported another 10,000 new coronavirus cases on Monday, the 12th day since the Fourth of July the number has topped that threshold. The state Department of Health reported 10,347 new cases and 90 deaths. That brings the state’s totals for the entire pandemic to more than 360,000 cases and over 5,100 deaths. 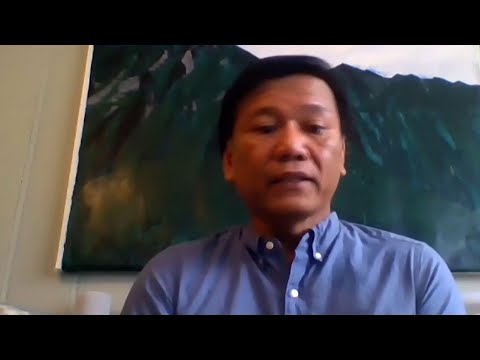 The new reported deaths brings Florida’s seven-day average to about 114 per day. Its overall deaths rank 25th in the nation per capita, or about 7 times less than highest-ranked New Jersey.

Hospitalizations for the disease continued to increase, standing at 9,452 statewide in the late morning Monday — up about 160 from the day before. Though the increase has slowed when compared to about a week ago, those additional patients have been straining intensive care units of some hospitals in the South Florida, Tampa, Orlando and Jacksonville areas.

Statewide, 18% of ICU beds were available.

The skyrocketing caseload is making for a strange summer in the Sunshine State, where many popular beaches are shuttered, residents and tourists can be fined for not wearing masks, and bars across the state aren’t allowed to pour liquor.

The upcoming plan to have the Republican National Convention in Jacksonville to renominate President Donald Trump continues to be on shaky ground. Even after the GOP announced plans to scale back the convention and hold more events outside, the local sheriff said people’s safety cannot be guaranteed.

Williams added: “There’s got to be some major reworking of what’s happening.”

Critics have complained that DeSantis has not mandated a statewide mask ordinance as cases rise. The governor has repeatedly said policies in hard-hit South Florida might not make sense in the Panhandle, where the infection rate is lower, even as his fellow Republicans increasingly acknowledge the need for a unified, nonpartisan message.

Speaking at blood center in Orlando, where he was interrupted by chanting protesters Monday, DeSantis said parents should be given a choice as to what is the best option for their children, whether virtual learning, in-class schooling or a combination of the two. Schools also need to make health accommodations for employees too if they are high risk, the governor said.

“Parents need to choose the best environment for their students, their kids,” the Republican governor said. “If a teacher doesn’t feel comfortable there ... I think they should be given as many options as possible.”

When asked about a Department of Education order requiring brick-and-mortar schools to reopen, DeSantis distanced himself from it.

“I didn’t give any executive order. That was the Department of Education,” DeSantis said. “Obviously, if you look at the epidemic, it’s more severe in some parts than others, and I think you should recognize that.”

The order, he said in a statement, “did not order any new directives regarding the requirements of schools to be open,” adding that “it simply created new innovative options for families to have the choice to decide what works best for the health and safety of their student and family.”

DeSantis was at OneBlood to encourage people who had been infected with the virus and recovered to donate blood plasma that can be used in the treatment of hospitalized patients with COVID-19. During the news conference, a group of protesters interrupted DeSantis with chants of, “You’re lying to the public.”

“We will not be defunding the police. Don’t worry about that,” DeSantis said as deputies escorted some of the protesters outside the building. Once outside, the protesters banged on windows and shouted for several minutes, requiring the speakers to talk loudly over them.