Biden: Trump ‘deserves’ to be investigated over Ukraine call

WASHINGTON (AP) — President Donald Trump urged the new leader of Ukraine this summer to investigate the son of former Vice President Joe Biden, a person familiar with the matter said. Democrats condemned what they saw as a clear effort to damage a political rival, now at the center of an explosive whistleblower complaint against Trump.

It was the latest revelation in an escalating controversy that has created a showdown between congressional Democrats and the Trump administration, which has refused to turn over the formal complaint by a national security official or even describe its contents.

Trump is defending himself against the intelligence official’s complaint, asserting that it comes from a “partisan whistleblower,” though the president also says he doesn’t know who had made it. The complaint was based on a series of events, one of which was a July 25 call between Trump and Ukrainian President Volodymyr Zelenskiy, according to a two people familiar with the matter. The people were not authorized to discuss the issue by name and were granted anonymity.

In a tweet Saturday, Trump referred to “a perfectly fine and routine conversation I had” with Ukraine’s leader. “Nothing was said that was in any way wrong.” 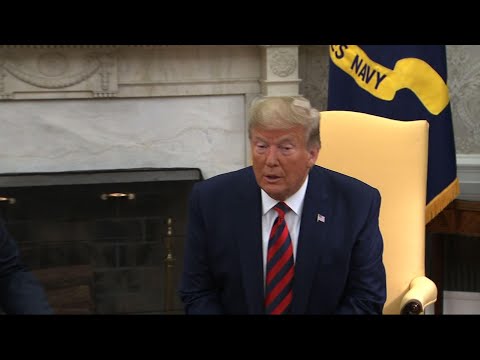 According to one of the people, who was briefed on the call, Trump urged Zelenskiy to probe the activities of potential Democratic rival Biden’s son Hunter, who worked for a Ukrainian gas company. Trump did not raise the issue of U.S. aid to Ukraine, indicating there was not an explicit quid pro quo, according to the person.

Biden told reporters in Iowa on Saturday that “Trump deserves to be investigated. He is violating every basic norm of a president. You should be asking him the question, why is he on the phone with a foreign leader trying to intimidate a foreign leader, if that’s what happened.”

He accused Trump of “doing this because he knows I’ll beat him like a drum and he’s using the abuse of power and every element of the presidency to try to do something to smear me.”

The U.S. government’s intelligence inspector general has described the whistleblower’s Aug. 12 complaint as “serious” and “urgent.” Trump insisted “it’s nothing” and “just another political hack job.”

There has yet to be any evidence of any wrongdoing by Biden or his son regarding Ukraine.

Trump and Zelenskiy plan to meet on the sidelines of the U.N. General Assembly this coming week. The Wall Street Journal first reported that Trump pressed Zelenskiy about Biden.

The standoff with Congress raises more questions about the extent to which Trump’s appointees are protecting the Republican president from oversight and, specifically, whether his new acting director of national intelligence, Joseph Maguire, is working with the Justice Department to shield the president.

Democrats say the administration is legally required to give Congress access to the whistleblower’s complaint. The chairman of the House Intelligence Committee, Rep. Adam Schiff, D-Calif., has said he will go to court in an effort to get it if necessary.

The intelligence inspector general said the matter involves the “most significant” responsibilities of intelligence leadership.

In the whistleblower case, lawmakers are looking into whether Trump lawyer Rudy Giuliani traveled to Ukraine to pressure the government to aid Trump’s reelection effort by investigating the activities of Biden’s son.

Democrats have contended that Trump, in the aftermath of special counsel Robert Mueller’s Russia investigation, may have asked for foreign assistance in his upcoming reelection bid.

During an CNN interview Thursday, Giuliani was asked whether he had asked Ukraine to look into Biden. He initially said, “No, actually I didn’t,” but seconds later he said, “Of course I did.”

Maguire has refused to discuss details of the whistleblower complaint, but he has been subpoenaed by Schiff’s committee and is expected to testify publicly next Thursday. Maguire and the inspector general, Michael Atkinson, also are expected next week at the Senate Intelligence Committee.