100s of accused priests living under radar with no oversight

Almost 1,700 priests and other clergy members that the Roman Catholic Church considers credibly accused of child sexual abuse are living under the radar with little to no oversight from religious authorities or law enforcement, decades after the first wave of the church abuse scandal roiled U.S. dioceses, an Associated Press investigation has found.

These priests, deacons, monks and lay people now teach middle-school math. They counsel survivors of sexual assault. They work as nurses and volunteer at nonprofits aimed at helping at-risk kids. They live next to playgrounds and day care centers. They foster and care for children.

And in their time since leaving the church, dozens have committed crimes, including sexual assault and possessing child pornography, the AP’s analysis found.

A recent push by Roman Catholic dioceses across the U.S. to publish the names of clergy members it considers to be credibly accused has opened a window into the daunting problem of how to monitor and track priests who often were never criminally charged and, in many cases, were removed from or left the church to live as private citizens.

Each diocese determines its own standard to deem a priest credibly accused, with the allegations ranging from inappropriate conversations or unwanted hugging to forced sodomy or rape. 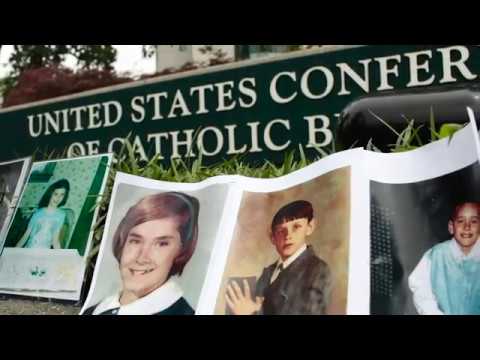 >The Associated Press found of the 2,000 living priests and other church employees who’ve been named as credibly accused abusers, nearly 1,700 were living without much supervision. many were still active in churches, and dozens committed crimes. (Oct. 4)

Dioceses and religious orders so far have shared the names of more than 5,100 credibly accused clergy members, more than three-quarters of them in the last year. The AP researched the nearly 2,000 who remain alive to determine where they have lived and worked _ the largest-scale review to date of what happened to priests named as possible sexual abusers.

The review found more than 160 continued working or volunteering in churches, including dozens in Catholic dioceses overseas. Roughly 190 obtained professional licenses to work in education, medicine, social work and counseling _ including 76 who, as of August, still had valid credentials in those fields.

The research also turned up cases where the priests were once again able to prey on victims.

After Roger Sinclair was removed by the Diocese of Greensburg in Pennsylvania in 2002 for allegedly abusing a teenage boy decades earlier, he ended up in Oregon. In 2017, he was arrested for repeatedly molesting a young developmentally disabled man and is now imprisoned for a crime that the lead investigator in the Oregon case says should have never been allowed to happen.

Like Sinclair, the majority of people listed as credibly accused were never criminally prosecuted for the abuse alleged when they were part of the church. That lack of criminal history has revealed a gaping gray area that state licensing boards and background check services are not designed to handle as former priests seek new employment, apply to be foster parents and live in communities unaware of their presence and their pasts.

It also has left dioceses struggling with how _ or if _ former employees should be tracked and monitored. Victims’ advocates have pushed for more oversight, but church officials say what’s being requested extends beyond what they legally can do. And civil authorities like police departments or prosecutors say their purview is limited to people convicted of crimes.

That means the heavy lift of tracking former priests has fallen to citizen watchdogs and victims, whose complaints have fueled suspensions, removals and firings. But even then, loopholes in state laws allow many former clergy to keep their new jobs even when the history of allegations becomes public.

“Defrocked or not, we’ve long argued that bishops can’t recruit, hire, ordain, supervise, shield, transfer and protect predator priests, then suddenly oust them and claim to be powerless over their whereabouts and activities,” said David Clohessy, the former executive director of the Survivors Network of those Abused by Priests, who now heads the group’s St. Louis chapter.

Some of the crimes involved drunken driving, theft or drug offenses. But 42 of the men were accused of crimes that were sexual in nature or violent, including a dozen charged with sexually assaulting minors.

Hundreds of these priests chose careers that put them in new positions of trust and authority, including jobs in which they dealt with children and survivors of sexual abuse, the AP found.

At least two worked as juvenile detention officers, in Washington and Arizona, and several others migrated to government roles like victims’ advocate or public health planner. Others landed jobs at places like Disney World, community centers or family shelters for domestic abuse. And one former priest started a nonprofit that sends people to volunteer in orphanages and other places in developing nations.

In dozens of cases, the priests took on positions with the approval of state credentialing boards, which often were powerless to deny them or unaware of the allegations until the dioceses’ lists were released.

Among them is Thomas Meiring who, after asking to leave the priesthood in 1983, began working as a licensed clinical counselor in Ohio, specializing in therapy for teens and adults with sexual orientation and gender identity issues.

Meiring, who did not return multiple calls from the AP, maintained his state-issued license even after the Toledo diocese settled a lawsuit in 2008 filed by a man who said he was 15 when the former priest sexually abused him in a church rectory in the late 1960s.

It wasn’t until 2016 that the Toledo diocese’s petition to defrock Meiring was approved. State records show that Ohio’s Counselor, Social Worker and Marriage & Family Therapist Board has never taken disciplinary action against the 81-year-old, who is among several treatment providers listed by a municipal court in suburban Toledo.

“We made noise about him years ago and nobody did anything. It’s mind-blowing,” said Claudia Vercellotti, who heads Toledo’s chapter of SNAP.

But Brian Carnahan, the licensing board’s executive director, said the law grants the authority to act only when allegations have resulted in a criminal conviction.

When the first big wave of the clergy abuse scandal hit Roman Catholic dioceses in the early 2000s, the U.S. bishops had reacted by creating the Dallas Charter, a baseline for sexual abuse reporting, training and other procedures to prevent abuse. A handful of canon lawyers and experts at the time said every diocese should be transparent, name priests that had been accused of abuse and, in many cases, get rid of them.

Most dioceses decided against naming priests, however. And among the dioceses that have released lists since then, some merely provided names, without details of the allegations that led to their inclusion, the dates of the priests’ assignments or the parishes where they served.

“The Dallas Charter was supposed to fix everything. It was supposed to make the abuse scandal history. But that didn’t happen,” said the Rev. Thomas Doyle, a canon lawyer who had tried to warn the bishops that abuse was widespread.

After the charter was established in 2002, some critics say dioceses were more likely to simply defrock priests and return them to private citizenship.

“If these guys simply left and disappeared somewhere, it wouldn’t be a problem,” Doyle said. “But they don’t. They get jobs and create spaces where they can get access to and abuse children again.”

Deacon Bernie Nojadera, the executive director of the U.S. Conference of Catholic Bishops’ Secretariat of Child and Youth Protection, noted that solving the monitoring issue is not a simple equation, since decisions default to the individual bishops in each diocese and the conference issues no overarching guidance that must be followed.

“We have 197 different ways that the Dallas Charter is being implemented. It’s a road map, a bare minimum,” Nojadera said. “We do talk about situations where these men are being laicized and what happens to them. And our canon lawyers are quick to say there is no purview to monitor them.”