SAN FRANCISCO (AP) — When people hear the name Ed Hardy, they likely think of the flashy, tiger- and skull-emblazoned clothing that rocketed to popularity in the 2000s, appearing on the likes of Paris Hilton, Britney Spears and cast members from the reality TV show “Jersey Shore.”

Others recognize Hardy as a trailblazing tattooer whose unique designs were licensed for use on apparel and merchandise, and whose legacy transcends the brand’s current notoriety.

But few know him as a prolific fine artist.

“The clothing was one little blip on his whole career, which was staggering,” said Mary Joy Scott, a tattoo artist who apprenticed under Hardy and works at the San Francisco shop he founded, Tattoo City.

Five miles (8 kilometers) southwest of Tattoo City, a lively exhibition opening Friday at the de Young Museum sheds light on Hardy as wide-ranging artist and tattoo pioneer. Through 300 paintings, prints, drawings and objects, “Ed Hardy: Deeper than Skin” is the first retrospective of his work and shows how Hardy intertwined fine art with tattooing to push both forward.

“Ed Hardy’s mission (was) to elevate the tattoo form from its subculture status back in the 1960s at least to a level of a folk art. I think he surpassed that,” said curator Karin Breuer. “Here it is in museum culture.” 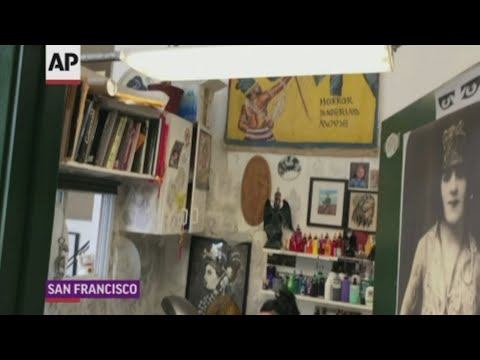 The exhibition, which follows Hardy’s donation of 152 prints to the museum, bursts with color as it tracks the 74-year-old artist’s evolution.

It features crayon drawings of sample tattoos Hardy made as a 10-year-old, when he set up a tattoo shop for friends in his Southern California neighborhood of Corona del Mar. Prints from his college days at the San Francisco Art Institute are displayed alongside lithographs and etchings by the likes of Rodolphe Bresdin and Gordon Cooke, who inspired Hardy.

“I’m part of a continuum,” Hardy said of his art idols. “There’s a lot more to my life than tattooing.”

One of the first pieces in “Deeper than Skin” is a 1967 print entitled “Future Plans,” in which a then-undergraduate Hardy, with only a few tattoos, portrays himself as fully inked. The exhibition comes full circle with its final image, a blown-up 2009 photo of a bare-chested, tattoo-covered Hardy, now a full-fledged artist retired from tattooing thanks to the financial windfall of the clothing brand.

Visitors can get a projected animation of a Hardy tattoo design “applied” to their skin. They can also walk along a snaking, 2,000-square-foot (186-square-meter) scroll suspended from the ceiling on which Hardy painted 2,000 dragons in the year 2000.

“Ed Hardy is the only tattooer in the Western world who could merit a show of this kind,” said Matt Lodder, a University of Essex professor who studies the history of tattoo as art. “Tattooers of a particular mode are all working, whether they know it or not, in a kind of pattern Ed Hardy was the first to lay down.”

When Hardy began tattooing in 1967 after abandoning plans to attend Yale art school, he was one of the few American tattoo artists with a fine arts background. Hardy was also the first Western tattoo artist to study traditional Japanese tattooing abroad. When he returned stateside, Hardy blended those techniques with the American sailor and military tattoo types to develop his signature style: colorful hearts, clouds, dragons, daggers, roses and ribbons with bold, black outlines.

In 1974, Hardy moved away from offering pre-designed “flash” tattoos toward made-to-order work, an approach that’s now the norm. Before Hardy, no other tattoo shop operated that way. The exhibition displays Hardy’s custom pencil sketches and watercolors beneath photographs of the works inked on human bodies.

The de Young offers discounts for tattooed visitors in an attempt to attract a wider demographic. The retrospective, which runs through Oct. 6, marks changing sensibilities in the art world as museums embrace tattoo as fine art.

“It’s a terrific affirmation, not only for myself, but for a lot of the old bandits and pirates that helped me in the business,” Hardy said. “They operated outside polite society, outside of the structure that controls what people think of as art.”