Off the Seychelles, a dive into a never-seen landscape

ST. JOSEPH ISLAND, Seychelles (AP) — The submersible dropped from the ocean’s surface faster than I had expected. With a loud “psssssss” the air escaped from the ballast tanks and the small craft suddenly tilted forward.

Within seconds, aquanaut Robert Carmichael and I were enveloped by a vibrant shade of blue, watching streaks of sunlight pierce the water’s surface. Soon a large manta ray appeared from the darkness below, gently gliding toward our small craft before vanishing into the distance.

The dive took place off a coral atoll called St. Joseph in the outer islands of Seychelles on a mission to explore the Indian Ocean. This body of water is poorly studied and few scientists have ever ventured deeper than the maximum scuba depth of 100 feet.

For more than a month researchers from Nekton, a British-led scientific research charity, have been using submersibles to dive deep below the waves to document the ocean’s health.

We arrived at St. Joseph Island in the early hours of the morning, and this was the first submersible dive at the new site. The sea bed suddenly appeared beneath our craft, a landscape no one had ever seen before.

I quickly scribbled down in the mission report the depth and time at which we sighted the bottom: “165 feet, 1144 UTC.” Carmichael, a veteran of the sea, relayed the information to the surface via an underwater telephone. Its loud static noise would be a constant of our dive.

We moved across a seabed of rock and sand and scattered soft coral until a great darkness opened ahead. Carmichael lowered us over the side of an underwater cliff. Our target depth was 400 feet. 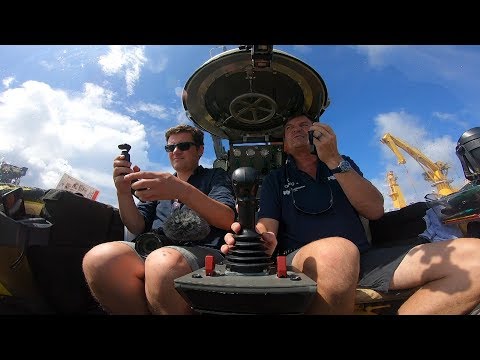 For over a month, the Associated Press has been covering an ambitious science expedition in the Indian Ocean.

Oceans cover over two-thirds of the Earth’s surface but remain, for the most part, unexplored.

Their role in regulating our climate and the threats they face are underestimated by many people, so scientific missions are crucial to take stock of the health of underwater ecosystems.

Able to operate down to 1,000 feet, these manned submersibles give scientists a unique understanding of changes in habitats as sunlight diminishes through the different layers of ocean. We glided with the current as six cameras mounted around the craft recorded its journey. In the months to come, researchers at Oxford will comb through the footage frame by frame, noting each species encountered.

Suddenly a drop of cold water landed on my arm, triggering alarm. Water is best kept on the outside of a submersible. Carmichael quickly put me at ease: The difference in temperature between the water around us and our submersible had created a layer of condensation on the hatch. We quickly soaked it up with towels.

It was curiosity that drew Carmichael to the ocean. “I just wanted to know what was down here,” he said. “It’s stunning in so many ways.”

This curiosity has attracted mankind for centuries. “The human mind is naturally drawn to grandiose notions of supernatural beings, and the sea is the ideal medium for them,” wrote Jules Verne, author of “20,000 Leagues Under the Sea,” possibly the greatest submarine novel of all time, which opens with fears over a mysterious sea monster sinking ships and harvesting the lives of sailors.

Thirty years after reading the novel as a child, I’m sitting in a tiny glass bubble observing the underwater world like Captain Nemo on board the novel’s submarine, Nautilus. We are foreigners to this realm, objects of fascination for the reef shark that approaches us, as curious of us as we are of it.

Even in the 19th century, Verne feared the extinction of numerous species of marine life. The fears have been proven true. A WWF report found that marine vertebrate populations have declined by almost half since the 1970s.

Fishing is no longer the sole cause. Man-made pollution, global warming and the acidification of the oceans are new challenges.

As the oceans slowly soak up heat from the atmosphere, marine species will be affected in different ways. Some will adapt. Some will migrate to cooler waters. Others will disappear, leaving a gap in ecosystems that have existed for millennia.

“I came into the Indian Ocean hoping I’d see a giant Napoleon wrasse,” Carmichael said of one of the world’s largest reef fish. “Here we are, 35 days into the mission and I still haven’t seen one.”

Maybe we’re just not diving in the right places. Maybe the reality is bleaker.

As the surveys ended and the currents became too strong to fight, the surface vessel ordered our submersible to return to the surface.

With the lights off, we floated a few minutes in the semi-darkness before the sound of ballast tanks emptying marked our slow ascent. The dark blue water around us lightened.

“The oceans are all connected and important to the quality of life for all humans,” Carmichael said. “It’s worth protecting because the air we breathe and the food we eat and the oceans we swim in really do have a meaningful impact on everyone’s life.”