Utah to require masks in schools, not statewide, amid surge

SALT LAKE CITY (AP) — Utah will require masks in schools as they reopen in the fall, but Republican Gov. Gary Herbert stopped short of a statewide mandate Thursday.

Herbert declined to issue a statewide mask requirement, instead encouraging voluntary compliance statewide and instructing counties and cities to request his permission if they think a face mask mandate is necessary. He has approved mask mandates in and around the state’s capital, Salt Lake City, as well as around popular tourist destinations such as Summit and Grand counties and the city of Springdale.

“I choose to say: ‘Let’s let the people, in fact, make those decisions,’” he said. Still “there is really no excuse for all of us not to wear face coverings such as a mask to help protect against spreading the coronavirus.”

He set an Aug. 1 deadline for the state to slow the spread of the disease, and indicated he may reconsider a mask requirement then.

More than 20 states have required some form of mask-wearing statewide to prevent the spread of the virus by catching respiratory droplets that can spread the virus when people exhale, cough, sneeze or talk. Several conservative-leaning states have implemented statewide measures, including Texas, Kansas and West Virginia. 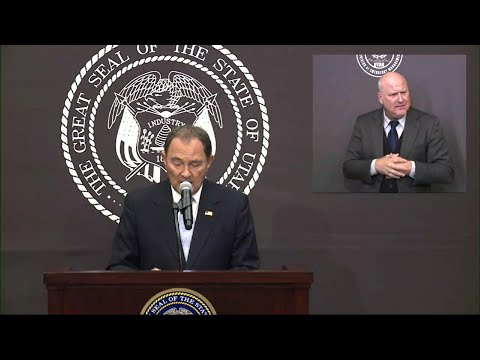 Herbert has faced mounting pressure in recent days from leaders in business and public health to mandate masks. The Utah Hospital Association sent a letter to legislative leadership calling the recent spike’s impact on hospitals and health care professionals “unsustainable.”

Herbert first raised the possibility of a statewide order last week as Utah began averaging about 550 confirmed cases per day — more than double the 200-per-day rate the state’s epidemiologist recommended that Utah should be at by July 1 to avoid having to consider a total shutdown of the economy.

“In Utah, we prefer to encourage people to do the right thing rather than issuing mandates and demanding compliance,” said Wilson.

For most people, the new coronavirus causes mild or moderate symptoms, such as fever and cough that clear up in two to three weeks. For some — especially older adults and people with existing health problems — it can cause more severe illness, including pneumonia, and death.

Sophia Eppolito is a corps member for the Associated Press/Report for America Statehouse News Initiative. Report for America is a nonprofit national service program that places journalists in local newsrooms to report on under-covered issues.