Perk up: France resuscitates dying villages 1 cafe at a time

PARIS (AP) — For the rural French village of Port-Brillet, the closure of its last cafe came as a painful shock.

Suddenly gone was the haunt where patrons put the world to rights over a drink or three, where anglers propping up the bar could crow about their catches from nearby lakes, and where the village mayor liked to play table football with friends. The demise of Le P’tit Bar, the local newspaper lamented, robbed Port-Brillet of “a bit of its soul.”

“Losing the cafe was a tough blow,” says the mayor, Gilles Pairin. “I believe in the virtues of cafes. Most of all, I believe in places where people can meet each other.”

A mass die-off of France’s iconic cafes , from 200,000 to fewer than 40,000 in a half-century, is depriving the French of cozy watering-holes where they’ve gathered for generations — not merely for perk-me-up espressos, crusty morning croissants, and beer and wine late into the night but, most importantly, for company to keep solitude at bay.

The social-glue role of cafes as places where the French mingle, find friendship and sometimes love, squabble, mourn and celebrate, is seen as being so vital for the national well-being that a mentor and political ally of President Emmanuel Macron is launching a 150-million euro ($165 million) rescue plan for 1,000 of them. It is focusing on small villages off the beaten track where the shuttering of cafes is often a drama because the closures leave inhabitants with few, if any, alternative places to socialize. 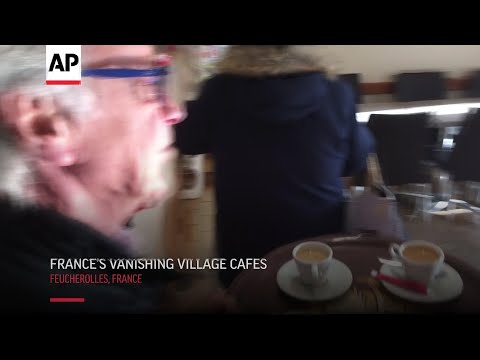 VIDEO: "Without a cafe, it would be lifeless."

For Jean-Marc Borello, who was one of Macron’s teachers when the future leader of France was a student at Paris’ prestigious Sciences Po university, saving cafes isn’t only a social mission. It’s also an effort to respond to the bubbling grievances in swaths of France that people who live away from the bright lights of Paris and other cities are being left behind, deprived of public services, fast and reliable communications and opportunities for both work and play.

This “real territorial fracture,” as Borello puts it, between hopping cities and torpid towns and villages was dramatically exposed by the so-called “yellow vest” protest movement that erupted last November and rocked Macron’s presidency.

Legions of demonstrators in fluorescent jackets converged on the capital from the provinces for successive weekends during the months of often-violent upheaval that could yet flare again. Their complaints over taxation, wages, retreating public services and other issues painted the government in Paris as being chronically out of touch.

Borello, who heads a large French nonprofit with an annual turnover of 1 billion euros ($1.1 billion) from a palette of activities in healthcare, childcare and other fields, doesn’t claim that rescuing cafes, alone, will assuage yellow vest tempers.

But reopening cafes in villages that lost them will, he argues, help combat social isolation, providing inhabitants with places to meet and kindle friendships, and “little by little restoring life to a village and connecting it to the rest of the world.”

“The simple fact of doing things together sometimes rekindles hope,” he said in an interview with The Associated Press.

Borello wants the new locales to be super-charged versions of the traditional French bistrot. As well as the usual beverages, snacks and betting slips, they could also offer essentials that aren’t always close at hand in out-of-the-way areas, including bread, groceries, internet access and postal services, and even help with online tax returns and other paperwork.

Although Borello doesn’t say so outright, people with cafes to go to might perhaps feel less of an urge to head back to makeshift camps that popped up on town and village roundabouts across France during the yellow vest movement. The camps had both a political role, as visible hotspots of protest, and a social one, with demonstrators gathering around campfires to share gripes, beers, barbecue sausages and make friends.

“Clearly, the need to meet other people, to chat with other people, was also at the heart of those troubles,” Borello acknowledged.

Employees at the Paris headquarters of Borello’s Groupe SOS are sifting through letters from mayors proposing their villages for one of the 1,000 cafes and from people volunteering to run them. The cafe managers will get business training, while “villagers will decide on the name and we’ll decide on the decor together,” Borello said.

Groupe SOS aims to inaugurate the first new or rescued cafe before the end of the year.

Changing French demographics and habits contributed to the die-off of cafes. Village kids moved to towns for work; and highways and France’s super-fast network of TGV trains pinched off towns’ through-traffic that kept bistrots in business.

As wine consumption plummeted and smoking was banned, the once-common sight of men starting their days with “ballons de rouge” — glasses of red — in smoke-filled bars increasingly became a memory. And instead of shopping at village markets, fortifying themselves in cafes before and after filling their baskets with produce, families instead drove to out-of-town supermarkets for weekly groceries.

With just 1,800 inhabitants, Port-Brillet in northwestern France had four watering holes when Yann Mustière, now 41, was in his twenties.

“We used to bar-hop from one to the other,” he recalls. “We used to have tarot competitions. There were Halloween nights.”

Each time one of them closed, “we used to say what a shame it was. But there was always one or two left,” he says. “Then there were none. It was sad.”

So sad that when Le P’tit Bar, the last cafe, went under in March, he felt compelled to buy it.

“A village like this without a bar is dead,” he said in a phone interview. “People don’t see each other anymore, there’s less bustle, the other traders feel it. The bar brought people to the village.”

Having given the cafe a lick of paint and a new name — Le Saint Eloi, named after France’s patron saint of goldsmiths — Mustière is planning a grand reopening on Sept. 30. He’s hoping to draw morning crowds of train-travelers to nearby towns and the city of Rennes, habitual drinkers and punters laying bets on horse races in the afternoons, and evening custom because “people like to have a drink after work.”

“I’m impatient to reopen,” he said. “I’ll offer a glass to everyone and play some music to bring people together.”