The Latest: Graham says Barr will ‘do well’ in Senate vote

The chairman of the Senate Judiciary Committee believes the president’s pick for attorney general will “do well” in a confirmation vote before the Senate.

Republican Sen. Lindsey Graham said Tuesday that he hopes his colleagues will vote to confirm William Barr based on his qualifications.

Graham says he believes Barr is “qualified by any reasonable standard.”

Speaking to reporters after the hearing, Graham said he hopes Barr will pick up votes from Democrats.

He praised Democrats on the committee for asking “good questions” during Tuesday’s confirmation hearing, which lasted nearly nine hours.

Barr says he doesn’t “subscribe to this ‘Lock her up’ stuff,” a reference to chants encouraging the jailing of Democrat Hillary Clinton that rose to prominence during Trump rallies in the 2016 campaign.

Barr says he doesn’t like the appearance of impropriety that comes from injecting politics into criminal investigations. The comments are a departure from the president, who has routinely cast those who challenge him in the political arena as criminals.

Barr made the remarks Tuesday during his Senate confirmation hearing. 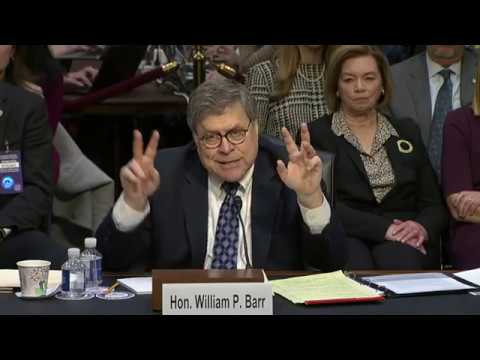 Attorney general nominee Bill Barr says he would “not go after” marijuana companies in states where cannabis is legal.

Barr said at his confirmation hearing on Tuesday that companies had relied on Obama-era guidance that kept federal authorities from cracking down on the pot trade in states where the drug is legal.

Sessions’ action came days after California’s broad marijuana legalization. Since the guidance was rescinded, there has been concern about the future of the growing cannabis industry.

Federal law prohibits the possession and sale of marijuana.

Barr says he believes that the “current system is untenable.”

President Donald Trump’s attorney general nominee says he would “not carry out” any order to fire special counsel Robert Mueller without cause.

William Barr is testifying at his Senate Judiciary Committee confirmation hearing. His comments about an attempt to fire Mueller were in response to a question from Democratic Sen. Chris Coons of Delaware.

Mueller’s team is examining potential ties between Russia and the 2016 Trump campaign. Barr says he wants Mueller to finish the investigation.

Former Attorney General Jeff Sessions drew the president’s ire after removing himself from the Russia investigation because of his previous work with the Trump campaign. Sessions resigned at the president’s request in November.

He testified Tuesday at his confirmation hearing before the Senate Judiciary Committee.

Asked about the partial government shutdown, in its fourth week due to an impasse over funding for a border wall, Barr says he would like to see a deal reached where Congress recognized that it was “imperative to have border security.”

William Barr told the Senate Judiciary Committee on Tuesday that there are certain situations where a reporter could be held in contempt “as a last resort.”

His comment came in response to a question from Sen. Sen. Amy Klobuchar, a Minnesota Democrat.

Barr said the situations he was envisioning would involve news organizations “putting out stuff that is hurting the country.”

In 2017, former Attorney General Jeff Sessions said he could not make a “blanket commitment” in response to a similar question from Klobuchar.

Barr says he personally told Trump he couldn’t represent him and spoke up for special counsel Robert Mueller’s (MUHL’-urz) integrity. Barr says he told the president that Mueller is a “straight shooter and should be treated as such.”

Barr said at his confirmation hearing on Tuesday that he took the meeting with the president after he was approached in June 2017 by the U.S. ambassador to Israel about helping Trump’s legal team.

Barr detailed his conversations with Trump during his confirmation hearing before the Senate Judiciary Committee.

Mueller is investigating potential ties between Russia and the 2016 Trump campaign. Trump has called the Russia probe a “witch hunt.”

Barr made the comment during his confirmation hearing Tuesday before the Senate Judiciary Committee.

Barr says if authorities aren’t going to bring charges, then there should not be a news conference to detail derogatory information uncovered during the probe. Comey has defended his decision.

Comey’s firing is part of special counsel Robert Mueller’s investigation, which also is examining whether President Donald Trump or anyone in his inner circle obstructed justice.

Trump cited Comey’s handling of the Clinton email investigation as one of the reasons for Comey’s firing, though he later suggested the Russia investigation was a factor.

Attorney general nominee William Barr says he would seek the advice of career Justice Department ethics officials about whether he should recuse himself from overseeing special counsel Robert Mueller’s Russia investigation.

Barr said during his confirmation hearing Tuesday that under department guidelines he would have to make the decision about whether to recuse himself. He says he would “make a decision on good faith based on the laws and the facts.”

If confirmed, Barr would replace acting Attorney General Matthew Whitaker, who declined to recuse himself from the investigation. Whitaker chose not to recuse himself despite the advice of a Justice Department ethics official.

Democrats called for Whitaker’s recusal given his past critical comments on the probe.

Trump complained his first attorney general, Jeff Sessions, was insufficiently loyal because he recused himself.

President Donald Trump’s pick for attorney general says it would be an “abuse of power” for Trump to intervene in an investigation he “has a stake in.”

William Barr said Tuesday at his confirmation hearing he believes such an action would be a breach of the president’s constitutional duties and could violate federal law depending upon the circumstances.

Barr has said the memo was intended to be narrowly focused on one of Mueller’s reported interpretations of obstruction. Barr also says his memo was based solely on public reporting and not any confidential information.

William Barr made the comment Tuesday at his confirmation hearing before the Senate Judiciary Committee.

Trump has repeatedly decried the special counsel’s investigation as a “witch hunt” and has suggested he is being targeted by the Justice Department.

Mueller is investigating potential ties between Russia and the 2016 Trump campaign.

President Donald Trump’s pick to be attorney general says he will look into how an FBI counterintelligence investigation was opened into whether Trump was secretly working on behalf of Russia’s interests.

Attorney general nominee William Barr says he has never heard of the FBI opening such an investigation on an American president. Barr was responding to questions from Senate Judiciary Committee chairman Sen. Lindsey Graham on Tuesday.

The South Carolina Republican asked Barr about a report by The New York Times revealing that the counterintelligence investigation was opened in the days after Trump’s firing of former FBI Director James Comey.

Barr is making the comments during his confirmation hearing before the Senate Judiciary Committee.

Trump has denied working for Russia.

California Sen. Dianne Feinstein said Tuesday she’s also troubled by Barr’s expansive view of presidential powers since he will be overseeing the special counsel’s investigation into whether President Donald Trump or his associates coordinated with Russian election interference.

Feinstein made the comments during the opening of Barr’s confirmation hearing.

Barr has defended the memo. He says it was narrowly focused on a single theory of obstruction and didn’t touch the broader questions surrounding Russian election interference.

Barr revealed Monday that he had sent the memo to White House lawyers and lawyers for Trump.

William Barr will need to emphasize on Tuesday that he supports Trump’s policies while assuring Democrats he will act independently and won’t interfere with the special counsel’s Russia investigation.

The 68-year-old will face questions from the Senate Judiciary Committee about his relationship with Trump and his views on executive power.

According to prepared remarks already released, Barr plans to tell senators that “it is vitally important” for Mueller to complete the investigation. Democrats have raised concerns about comments Barr has made about Mueller’s probe.